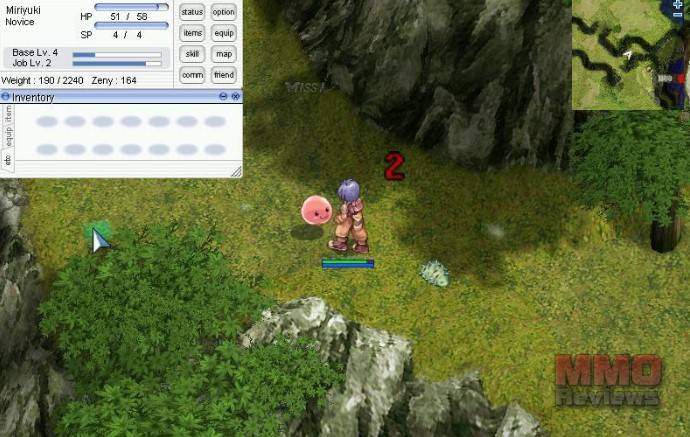 Developed by Gravity CO for Windows.

Ragnarok is an online role-playing MM game based on Norse mythology. Users can create characters and venture off alone or in groups in far-flung fantasy worlds full of adventure. Player characters interact in a 3D environment but are represented by 2D character sprites for front, back, side and diagonal facings.

In the land of Midgard, the existence of peace eventually led the humans to erase their memories of the scars and hardships of the wars in the past. Not remembering the faults of the past, culture was spreading throughout the land along with selfishness, corruption, and arrogance.

Then one day, strange occurrences started happening, breaking the balance that once existed in Midgard. There came a strange howl from the boundaries that divided the humans, God, and demons; creatures began attacking; increasing earthquakes and hail - and...
The mysterious legend of demons...
As the fragile peace began to fall apart, stories about the parts of Ymir, protecting the peace, began to spread among the adventurers. Forgetting the true nature of it, people set out to seek each of the pieces for their own selfishness, and the wealth that would come with it...

In Ragnarok Online, you can enjoy two different PVP modes, 'Yoyo Mode' and, 'Nightmare Mode' which includes experience loss and item drop penalties. PVP mode is only available to characters higher than level 31.

Depending on the type of card, they have specific attributes. When attached to a weapon or armor, the card will exhibit its hidden abilities. Cards can typically be obtained through monster drops, and there are several different rare cards available. There are weapons and armor that have 'slots'. If you add the card to these slots, the weapon or armor will then have the attributes of the card. The better the weapon, the more slots available to add different cards. But once a card is added, you cannot separate it from the item so be cautious in choosing which card to add to which weapon or armor.

All players start in the game's first class, the novice. Novices are, as their name implies, largely a tutorial class built for allowing new players to get the general feel of the game. Upon reaching a certain level (dependent on their desired job), players can change to one of six first classes, or choose one of the expanded classes, along with Super Novices. Upon reaching another level goal, first classes can then change into one of two second classes. Once the player reaches base level 99 and job level 50, they can elect to "rebirth" their character, and relevel as a transcendent class, which has more skills and a larger number of status points to work with, although the experience curve is much higher.

Acolyte
The Acolyte class is the standard healing class in Ragnarok Online. It is the only of the first class characters with a healing spell. The Acolyte class also may buff itself or others with skills such as "Increase Agility," "Blessing," and "Angelus." Furthermore, the Acolyte class, through its "Divine Protection," "Demon Bane," and "Signum Crucis" skills functions as the anti-undead class. The Acolyte class progresses to either Priest or Monk.

Mage
The Mage class is the basic offensive spellcaster in Ragnarok Online. Specializing in elemental damage, the Mage deals damage to enemies by casting spells. The Mage class progresses into either Wizard or Sage.

Merchant
The Merchant class provides the backbone of the Ragnarok Online economy. Merchants may purchase a cart to carry additional items with them, as well as may open up street vendor shops with the "Vending" skill. The Merchant class also may purchase items from shops at a discounted rate, as well as may sell items to shops for higher prices, thanks to the "Discount" and "Overcharge" skills. Merchants also possess fighting skills, with the ability to take their cart into battle with the "Cart Revolution" skill, which deals additional damage if the cart is full of heavy items. The Merchant can progress into either Blacksmith or Alchemist.

Archer
The Archer, as its name suggests, specializes in attacking with a bow and arrow. Its skills allow the Archer to attack from further away, as well as to fire two arrows at once with the "Double Strafing" skill. The Archer skill "Improve Concentration" allows the Archer to temporarily increase its dexterity and agility stats as well as detect hidden enemies in a small area. The Archer class progresses into either Hunter or Bard for male characters and Dancer for female characters.

P2P servers
The original payment model, pay to play, is still in use by all regional versions. Depending on the version, users can pay by a monthly subscription or by pre-paid cards.

F2P servers
There are official "Free To Play" servers where players can play Ragnarok Online free of charge, with a few differences in game play. Major differences are the limited use of the Kafra Teleport service, upgrading weapons and armor never have a "safe zone" in which you cannot break the Weapon/Armor, items have had their costs changed or been removed entirely from the game, the Acolyte skill Teleport has been modified, and prices on certain NPC items received a moderate increase. Notably, characters may be any job class, access any map, attain all skills, wear any gear, and progress to all levels without payment of microtransaction fees. Changes vary from server to server.