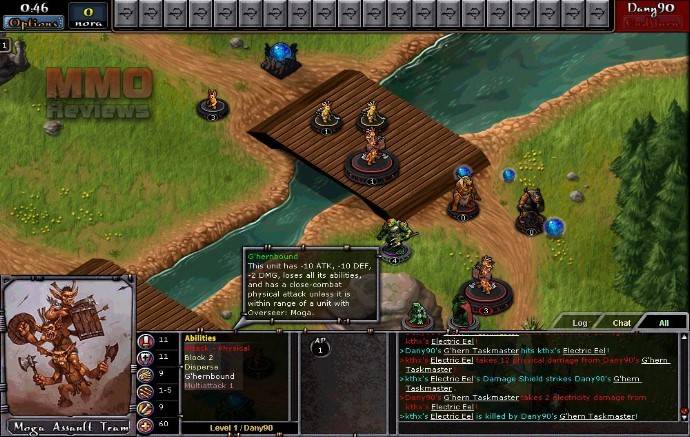 Pox Nora is a free to play turn-based tactical MMO in which players collect, earn and trade cards to construct their own army made up of magical monsters and creatures, various spells, relics of power and items to arm themselves in battle against players from across the world in PVP. Combining classic elements of both tactical tabletop RPG’s and trading card games Pox Nora is a unique strategy focused MMO.

The core of the game is for players to construct their own deck/army of powerful Runes; creature Champions, spells and various items that when assembled players can use to go head-to-head with other players and battle them for rewards, XP and rank. Players are able to acquire new Runes by competing, earning currency and purchasing them in the shop, trading them with other players or even crafting their very own Runes in the powerful Rune Forge. The game focuses primarily on PVP but there is also an extensive PVE campaign that will also allow players to gain XP, gold and various exotic Runes.

In total players can choose from eight unique factions, each of which has numerous benefits and skills that players can use during battles and typically define the way a faction and its units should be used in battle, with each focusing on a different type of strategy. Such factions as the dwarven Ironfist Stronghold focus on being a primarily defensive faction, they are slow but have a stronger resistance to spell damage, heavy armour and healing capabilities that make them harder to take down. The Forglar Swamp are the walking frog-like humanoids whose primary ability is being able to manipulate water, with strong healers and the ability to extract more nora from resource wells, they are a fast and mobile elemental spellcasting force. The Underdepths are powerful Demons that focus on dealing damage and have some of the hardest hitting melee Champions available making them extremely dangerous in the right hands.

Players are not bound to having only their own faction Champions in their ranks, with a number of non-faction specific Runes available, however players gain extra boosts and bonuses if they have a set number of their own faction within their deck, either 15/15 or even a Full Faction to gain greater bonuses.

In a battle players must concentrate on managing their Nora resources, which they spend each turn to place Champions on the map, cast spells or play any other randomly drawn Runes from their deck. Each Champion has a set number of action points that they can take allowing them to move across the gridded battle map as well as attacking enemy Champions. Players can try to control certain Nora resource wells to give them extra resources to spend each turn, but ultimately the aim of the game is to destroy the enemies Shrine at the other end of the map.

Some players may acquire an Avatar, which replaces their Shrine, and as the game progresses after a set number of rounds the player has the option of transforming their Avatar statue into a mobile damage dealing unit. Whilst incredibly powerful the Avatar is still essentially the player’s Shrine and so whilst in battle if they are destroyed the player will still forfeit the game, made easier as some of the abilities that cannot normally be cast on a Shrine can be cast on an Avatar.

Throughout the game players will acquire a variety of Runes, many of which in time will become obsolete and serve no purpose as they are replaced by more powerful Runes, however players are able to destroy these Runes using the Rune Forge system and acquire nora shards that they can then use to re-forge and create most of the game’s available Runes to fill out any missing cards in their deck.