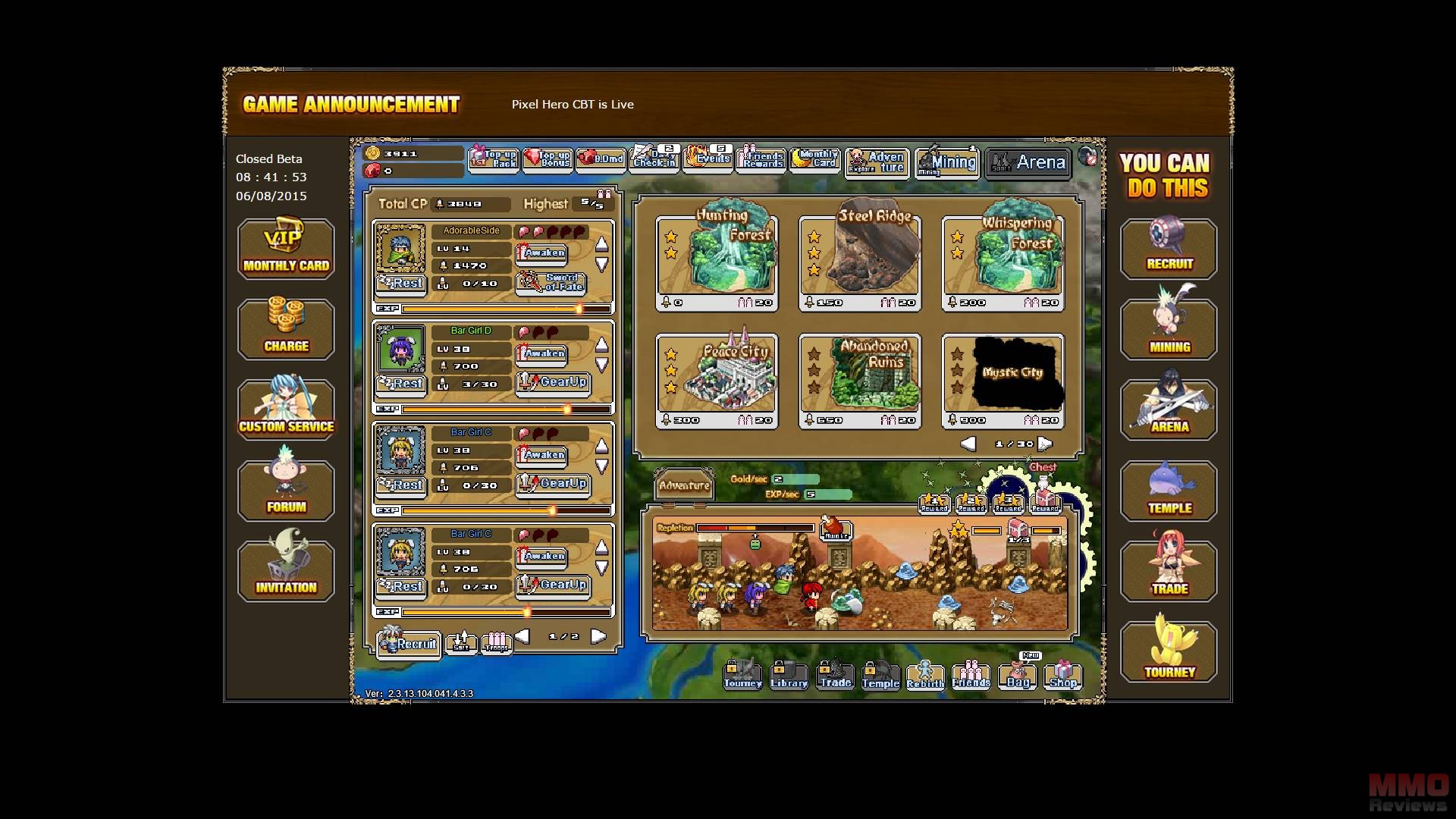 A web based free to play RPG, Pixel Hero is a saga of fantasy proportions where players are tasked with putting together a powerful party of Heroes, equipping them, training them up and journey across dangerous terrains and environments in search of legendary artifacts and to put an end to evil. With classic RPG pixel based graphics and retro sound and music the game captures the spirit of old school RPG games such as Final Fantasy.

Pixel Hero offers a relatively casual gameplay experience that allows player to gain XP and gold even when they are not playing through the Adventuring system and, when playing, is filled with a number of automated systems such as auto-combat that puts players more in the position of managing the party, its Heroes and gear than actively engaging in any action. End game content typically focuses on PVP with players trying to gain ranks and position in return for reward.

There are an almost infinite number of Heroes that players can acquire, every Hero has its own unique stats and its power level/quality can be identified by its colour: White for Normal, Green for Elite, Blue for Heroic, Purple for Legendary, Gold for Leader Class and Sparkling Gold for premier Leader Class, the higher the level of Hero the higher their stats typically are and the faster they will gain XP and level up.

Players can acquire an endless number of Heroes, but they can only have 20 in their party at any one time and so as often as not players will have Heroes that they neither need nor want and so can either trade with other players or enter the Temple feature to dismiss them. Dismissed Heroes return a number of Honor Shards that they can trade back in to purchase different Heroes.

Heroes can also be acquired through the Recruitment system where they are purchased, as well as gaining them by getting involve in other game features that yield their own unique currencies. Once part of the party players can perform a number of actions to improve the stats of a hero to make them a more valuable addition to the group.

An important feature to the game players have their own area of land that they can mine, using up Digging Attempts to clear rock and dirt to reach distant ores and jewels, each of which can take minutes or even hours to recover. Once these valuable resources have been claimed players are able to use the Forge system to create new weapons and gear for their Heroes.

The main PVE feature is the Adventure Stages, 180 different stages in total offering a wide selection of enemies and environments to battle through; Adventuring is not something players need to be actively engaged in, simply by selecting a zone and the appropriate party Heroes the group will automatically find fights, quests and loot.

The main PVP feature is the Arena that allows players to compete against one another to earn powerful King’s Medal, with these resources players can purchase different Heroes, with those players at the top of the rank ladders earning free medals each day. The Tournament only allows players to see Heroes in front of and behind their position, by defeating higher ranked players Tourney competitors can climb the ranks and gain King’s Medals of their own to help retain their prestigious position.

Combat is a turn based system that is completely automated, upon entering battle both sides will attack as one based off their individual Heroes, or creatures/monsters in the case of PVE against AI, fighting back and forth until one team loses all of its health and is defeated.