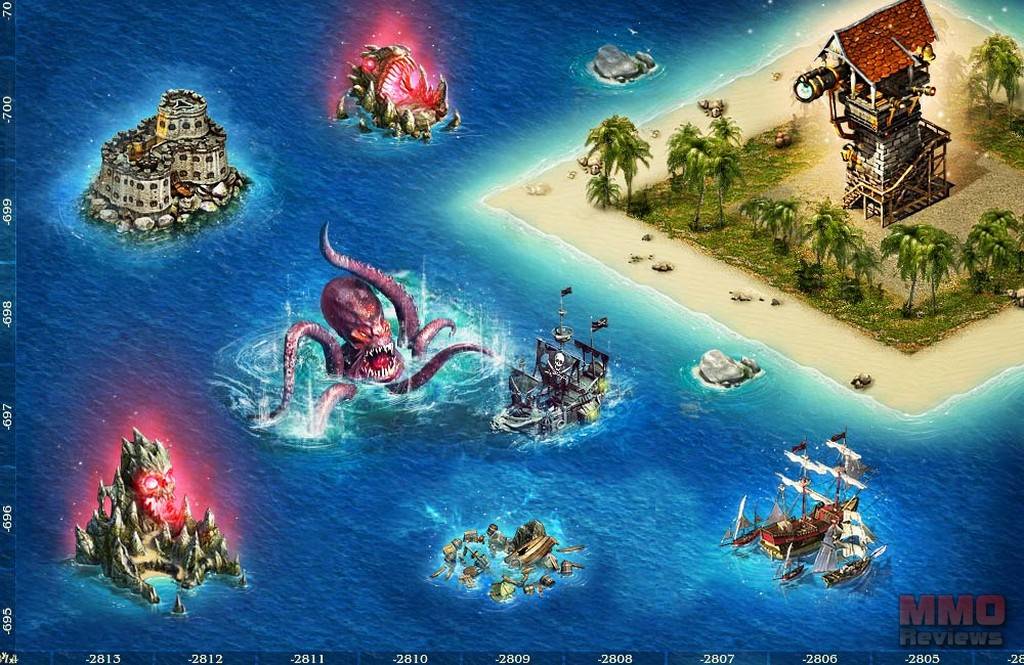 Pirates: Tides of Fortune is an exciting free to play MMO that focuses on base building and strategy as players step into the boots of a Pirate Captain looking to make a name for themselves as the most fearsome Captain around. With aspects of resource management, trade, diplomacy and combat with other players, the game is a simple yet fun MMO that can be accessed with ease after a quick registration through the official website and played in any web browser.

At its core Pirates: Tides of Fortune is a traditional base building MMO where, as Pirate Captains, players are responsible for improving their Haven by constructing the much-needed buildings, fortifications and raising a crew of Pirates to both defend your territory from rival players as well as creating an offensive force to pillage and plunder rivals for their resources. There are strong elements of resource management that are required and players must prioritise their build orders so that they do not get caught with weak defences or fall behind offensively. Combat is only one element of the game and players can focus on trade with other players and diplomacy to create strong allies and even ultimately creating a Brotherhood (a Guild) where players can help each other out more and go up against other similar organisations.

There are three main resources that players must concentrate on acquiring (Rum, Gold and Timber), either through construction of production buildings, which will yield a constant income of resources, through trade with other players, completing tasks and quests or alternatively through conquest.

Resources are the lifeblood of a Pirate Haven, without them production will grind to halt and, in the case of Rum, Captains may find a mutiny on their hands as their crew begin to abandon ship and leave the Haven.

Essential to progression are the Discoveries, the available technologies that players can unlock as they progress through the game that will give them access to new units, buildings, upgrades and functions to keep them competitive. Players can acquire a Sketch daily from their Tinker NPC, once enough Sketches have been acquired they can spend them to unlock a new Discovery, to progress in the game players will be required to login frequently to gain access to these Sketches.

There are a variety of buildings that a player must construct that are essential to survival, from the Harbour that allows players to build and install their fleets, to various defences and fortifications that will help repel invading rivals. All buildings require a set amount of resources to construct or upgrade to a more efficient version and take an amount of time to complete based on how high a level the build or upgrade is.

Players gain access to a wide selection of available crew, each of which can be useful in different ways such as being a more defensively focused unit able to defend your Haven from attack or put aboard your trade ships that are trying to make money, but are vulnerable to enemy attacks.

Alternatively players can create more offensively focused units that are ideal for making such raids and attacks and, where successful, can bring home a portion of a target’s resources to add to their own resource pool.

Combat is completely automated in the game and the strategy revolves more around building up a mix of units that will work well in an attack based off their offensive and defensive stats. During an attack the AI will automatically determine who wins the battle and players can check out a full battle report to see the casualties from both sides as well as the rewards that they earned from the battle.

New players are blessed with new player safety for certain amount of time or until they reach a specific level or attack another player, during this safety time they cannot be attacked whilst they learn the basics of the game and manage to assemble the beginnings of a defensive crew.