Pirates of the Burning Sea score:

Pirates of the Burning Sea screenshots: 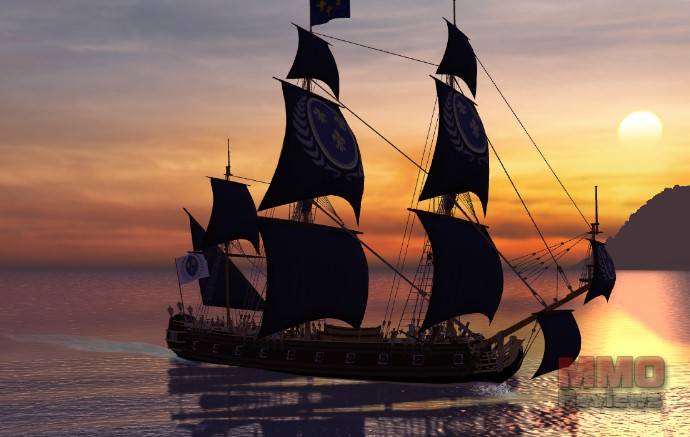 Pirates of the Burning Sea

Pirates of the Burning Sea review:

Pirates of the Burning Sea (abbreviated PotBS) is a massively multiplayer online role-playing game (MMORPG). The game is set in the Caribbean in 1720 and combines tactical ship and swashbuckling combat with an immersive player-driven economy.

Set sail for a swashbuckling, massively multiplayer online adventure in the pirate-infested seas and Caribbean ports of 1720. England, France, and Spain have unleashed their forces on the Caribbean. Naval officers captain massive warships through bloody engagements at sea. Freetraders charge through blockades and smuggle the war material needed to conquer the enemy's ports. Privateers raid enemy shipping, looting ships of their treasure and rival nations of their glory.

Through it all sail the Pirates. Bloody, bold, and resolute, they serve no flag and heed no king. They live free, fight hard, and obey only fate.

Intense Tactical Ship Combat
Fire grape, bar and heavy round shot from your cannons in colossal open sea battles, but head the direction of the wind or you'll find yourself dead in the water.

Swashbuckling Sword Fights
Take-up arms with three swashbuckling fighting styles, from the deadly and formal Fencing, to the flashy dual-wielding Florentine, or the rowdy and treacherous Dirty Fighting.

Join the Caribbean Community
Socialize, group, and join the player driven economy to make, trade, and sell everything needed to play. Manufacture your own goods for in-game profit or your own use. Build, capture, and customize dozens of historical ships or player created originals.

Players can choose a Career for their avatars when they begin the game. The Career determines what abilities and features he will accrue as a captain. The player will receive one point for his avatar's career on every other level gained. These points can be spent in various ways depending on which career the player has chosen. Once a career is chosen, it cannot be changed.

There are a total of 45 skills for each Career. The skill trees are composed of 9 skill chains, each 5 skills in depth. A player will be able to reach the end of a single skill chain by Rank 15, and is then considered somewhat equal to a Rank 50 in that skill chain.

The different careers for nationals (British, Spanish, French) are:

Privateer
Focuses on utilizing the advantages of smaller ships to outmaneuver and outwit opponents. Privateers have an edge in boarding combat and can learn a skill that enables them to use Pirate PvP zones.

Freetrader
Focuses on trading, production and economics. They have abilities to effectively evade opponents in combat. Freetraders may learn skills that increase their ability to gather resources and produce goods.

Cutthroat
All-around capability including the special ability to take command of defeated ships. These ships only have one durability point. If a Pirate takes command of a class specific ship he will automatically be flagged for PvP.

Buccaneer
More advanced career with more in the moment type skills. The command oriented "pirate", can use and collect captured ships deeds and can give bonuses to allied ships.

PvE players drive port conquests by generating Unrest points through sea battles against NPCs, economic missions, and other PvE activities. Join your guild or nation to rack up Unrest and push an enemy port over the tipping point and into conquest mode. Everyone in your nation gets the loot when a server victory occurs.

Missions Generate Unrest
Complete challenging PvE missions at a port to destabilize it and make it vulnerable for conquest.

Merchants Matter
Earn Unrest by devoting some of your finances to manufacturing gunpowder and other supplies, then deliver those goods to rebel agents in enemy ports.

Attack the ports of enemy nations to open up PvP areas in the heart of the game world. Your PvP battles affect the siege of the port and lead to a 24 vs. 24 PvP battle on land and sea. Conquer enough ports and your nation scores a server victory, earning powerful loot rewards available no other way!

War Torn World
Player activity opens PvP areas in the heart of the main world, not in isolated areas.

It is the name given to avatar combat in Pirates of the Burning Sea. Players select one of three fighting styles to learn, and use that style to combat each other or any of the various NPCs they might encounter.

The player chooses one of three fighting styles, and through gaining ranks, earns swashbuckling points to spend on skills. There are a total of 45 skills for each fighting style. The skill tree is composed of 9 skill chains that are each 5 skills in depth. A player is able to reach the end of a single skill chain by Rank 15, and is then considered somewhat equal to a Rank 50 in that specific skill chain.

The three styles are:

- Stripped – A merchant variant. A low-level requirement version of a large trade ship although not equipped with guns.
- Courier – An easy-access variant. Courier ships are slightly faster and easier to handle, but they have less firepower and armor.
- Heavy – An upgrade variant. Heavy ships have significantly more armor and structure, and often have other combat benefits.
- Sleek – An upgrade variant. Sleek ships are faster and handle better. They might also have slightly better armor.
- Mastercraft – The premier ship variant. Mastercraft ships are expensive custom made ships that have been restructured to have room for more (and potentially heavier) guns and stronger hulls.
- Pirate - Pirate variants often mount heavier, or more guns and armour. They are limited to the two pirate classes.
- Privateer - Privateer variants are often faster and more suited for solo player vs player combat.
- Trader - These are often fast, "smuggling" type ships, not well suited to combat, they can be outfitted to be very fast. Most of these, if not all, are limited to the Freetrader class.
- Naval - These ships are given as a reward to Naval Officer classes for participating and destroying enemy shipping. These ships are given new names, and often mount much heavier armour, weaponry and crew than the regular versions. One example is the Mercy Naval Frigate, which is version of the Defiant Mastercraft frigate, which itself is a version of the regular Defiant.

The economy in PotBS is a player-driven, production-based system. This means that everything is made by players, but not by the avatars themselves.

Players manage plots of anything from lumbermills to shipyards in order to produce goods that can either be sold to other players or be used by the producer themselves. The buildings will then save up hours, in real time, that can be used for production. They will be saved up even when the player is not playing, but only to a maximum of 72 hours. Each account is limited to 10 plots per server.

While there is no requirement to taking part in the economy system, the rewards of doing so are significant. Economy is also directly tied to the port contention system, as who controls a port might control access to resources only available at that port.

Pirates of the Burning Sea game