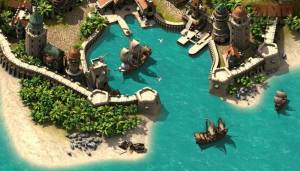 Pirate Storm is a free to play browser based MMORPG set in the era of pirates. The game features lots of quests, customizable equipment and ships, friend lists, guilds, a group system and much more.

In Pirate Storm, you'll step into the salty boots of a dread pirate, navigating treacherous waters, fighting enemies and monsters alike in a never-ending quest for fame and glory. You will rise in rank with every battle, until you are the most feared pirate on the ocean. Load the harpoons, turn sea monsters into chum, send your enemies to their watery graves and unleash the devastating power of your cannon fire.

In the game you can sail different types of ships

Once players have advanced to a high enough level, they can join or create a guild, and create their own island in the Guild Island map, and then build, upgrade and fortify defenses to protect it against enemy guilds.

Guilds can carry out raids on their enemies, which will earn points and help it advanced through the ranks. The top ten guilds earn special rewards, and guild members enjoy other benefits as well, like upgraded abilities, bonus loot discounts on merchandise and repairs. And every month, the top guild on each server will be named "War Master," complete with prestigious insignia that marks it as the most feared force on the seas.