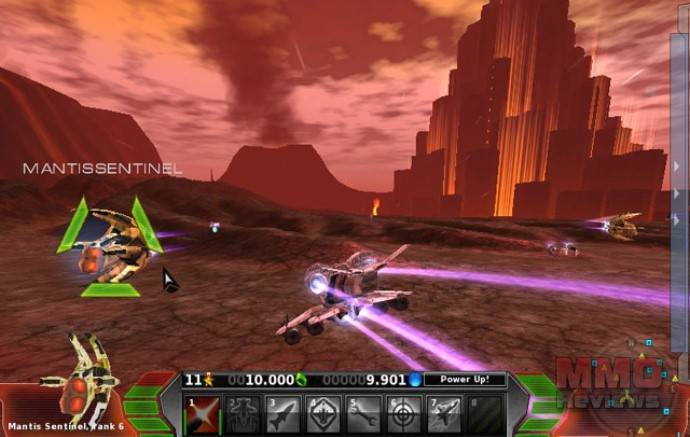 Pirate Galaxy is a free to play, browser-based, massively multiplayer online game set in the distant future. There are two ways to play Pirate Galaxy: Either directly in your web browser or in a stand-alone game client.

It is a dark age for humankind. The different species of the galaxy compete aggressively for Cryonite, the most valuable mineral in the known universe. The Mantis, a ruthless and powerful breed of space aliens, have gained supremacy over the cryonite-bearing planets. Aggressively defending their strongholds and trade routes, they have condemned all other civilizations of the galaxy to bottom feeding. Whoever controls the Cryonite, controls the galaxy!

You take the role of a daring starship pilot, joining an organization of space pirates determined to take back from the Mantis what they have taken from you -- the pride, the dignity, and the liberty of the human race!

- Superb 3D graphics
- Real-time space- and ground-based combat
- Straightforward and intuitive controls
- Exciting story and atmospheric music
- Huge game universe with dozens of planets and star systems
- Battle in conquest mode and conquer the galaxy!
- Face-off against other players and clans
- Play online and be part of a global community Free to play
- no installation fees, no subscription fees!

Surface Mode
You start the game on the surface of Vega 2 and you should familiarise yourself with the gameplay there, as all the missions play out on planet surfaces. This is where combat occurs, missions are completed and energy as well as Cryonite can be collected.

Orbit Mode
A planet’s orbit is somewhat similar to a building’s lobby. Here, you can examine and select missions or even prepare fleets for those missions. If you feel you need to take a break from fighting the Mantis, you can escape to orbit and recharge… until your next encounter…

Space Stations
Space stations give you the opportunity to augment your ship with new equipment. Once you’ve obtained blueprints for the desired upgrade, space station technicians would be pleased to install it – in exchange for Cryonite crystals, of course.
You can also purchase entirely new spacecraft, provided you have enough crystals. As different species own and operate the space stations, the craft designs and capabilities vary from station to station – keep an eye out for the best deals!

Star Map Mode:
To leave the first planet’s orbit, you need to look at the star map. Here, you can see all the planets, moons and star gates (more on these later) in the current system.

The route to all of these objects is ascertained by sending a probe – it will make its way to and back from the object, ensuring the route is free and safe. Once the probe returns, you can make your way to that object uninhibited.

Star Gates
Once you’ve completed all necessary story missions in a system (marked yellow), you can use the star gates to move to the next star system.

Pirate Mode
Pirate mode is unlocked after you have completed the first few levels in the game. When you switch to this mode, you can attack – or be attacked by – any other pirate player on the surface of a planet. To switch to this mode, simply click on the skull in the middle of the panel at the top of the screen. After a short delay, you’ll be a pirate!

Conquest Mode:
Priate Galaxy gives you the option to join fleets (similar to Guilds). As a member of a fleet, you can take part in interplanetary conquest – taking control of planets and all that comes with them.

When a planet is available for conquest mode, competing fleets may conquer the planet by capturing – and holding – a number of strategic locations on the planet. The fleet that holds these points the longest has conquered the planet.

A conquered planet brings the victorious fleet a bonus – equivalent to the Mantis’ Cyronite in that star system and a smaller amount in surrounding systems.

Pirate Galaxy can either be played in the game client or even directly via your web browser, without the need to install any game client. The mouse and keyboard are used to control your spaceship, this combination makes space travel a piece of cake. Of course, it’s not just getting from point A to B – you’ll be able to fire ion cannons, run Cryonite accumulators, use speed boosters, protect yourself with shields and much, much more…

If you’re feeling meek, you can find many items just lying around on the planets of Pirate Galaxy, but if you’re in more of a fighting mood, you can obtain much of the following by destroying either Mantis or other player’s ships.

Energy
Blue energy caplets are distributed randomly throughout the planets in the game. They’re needed to use practically every skill in the game, so keep yourself topped up. The maximum amount of energy you can store increases with rank.

Cryonite Crystals
These are the green crystals sometimes left behind after shooting down Mantis ships. They form an in-game currency; you can exchange them for upgrades (when you have the necessary blueprints) at star bases.

Blueprints
Blueprints are particularly useful – it’s always a good idea to pick them up if you see them, even though you can’t tell what they are for before you collect them. They can contain details for auto-repair systems, new weapons or even enhancements to your ship’s drive.

Retrieving items
To obtain any of these items merely click on them, your ship will move within range and you can then click on the collector (or press 2). Do note - you’ll need to stay stationary for a few seconds before the item is safely in your hold.