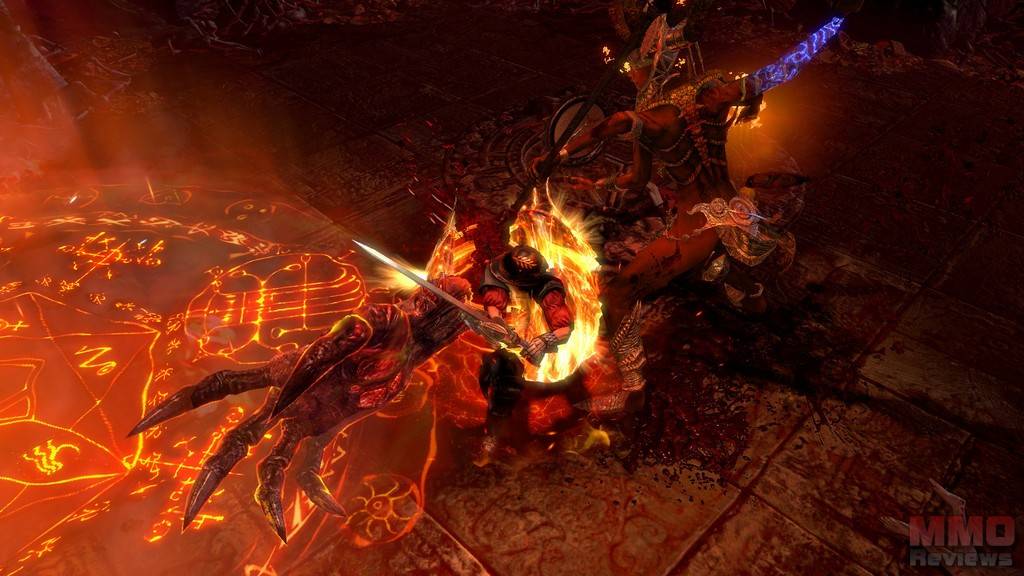 As an unfortunate victim exiled from the lands you once called home, your first struggle is to swing across the sea to reach the shores of Wraeclast, the undead continent where death awaits. For many slipping beneath the ocean waves is a far better fate than facing the untold abominations that awaits them on the land.

Players will band together with other exiles, fight for their own survival and adventure deep into the underground fighting against all manner of creatures and otherworldly malignant monsters and higher powers. Those who survive will become great heroes, equipped with powerful artefacts that can be used to push back the encroaching enemy that never tires and never sleeps.

There are seven available classes within the game, each focusing on a combination of the three main attributes:

Strength: those classes who use physical power above all else, strong and brutal they deliver powerful physical attacks and are able to wield great weapons and where nearly impenetrable armour for unparalleled defensive abilities.
Class: Maurader

Dexterity: being fleet of foot and nimble enough to Dodge the attacks of your enemy is often more appealing than simply being able to absorb a blow, these agile combatants dash in and out of the fray speed and deadly rapid attacks.
Class: Ranger

Intelligence: relying on knowledge and the learn aid arcane art forms these conjurers and spell weavers use brains over brawn, able to wield powerful magical attacks and defend themselves with shields of your magical energy.
Class: Witch

As well as their character level most of a player’s powers and abilities come from their gear, the higher the quality of their weapons and armour directly affects how many sockets that piece of armour has, which in turn means they can equip more Skill and Support Gems that give them access to new talents.

Each piece of armour has a various number of sockets in it, low-end armour may have one or two and more high-end armour and weapons can have up to 6. Each socket is coloured to match up with one of the three attributes; red for strength, blue for intelligence and green for dexterity, and the sockets on an item can be a mix of different colours which determines which gems can be put into that socket.

A skill gem gives access to specific powers and skills such as fireballs, ice blasts, cleave attacks, rapid strikes and more and will have an attribute requirement that the player needs to meet before they can gain any use from back gem. Players can also gain support gems which are paired up with skill gems to boost them, increasing damage, range and more through special linked sockets.

Gems can typically be earned from quests all looted from dungeons and adventure areas, the more dangerous and deadly an area the higher the chance of losing a rare skill gem, each of which is levelled up as the player gains XP when fighting with an equipped gem. The XP and level of gem is retained even if removed from the gear item and traded or sold to another player.

Among one of the more unique features of the game is the passive skill tree, a huge network of linking skill nodes that players can put points into to increase their passive abilities such as increasing attributes, critical hits, defences or the way some powers are used. Players gain a skill point each time they level up or can earn them through quests and can spend them on the skill tree, each node requires one skill point to unlock and a player can only unlock nodes that are linked to a node they previously activated, using them to create a chain towards more powerful passive skills and abilities.

Regardless of the class each will use the same tree, however their starting position on it is different so that the surrounding skill nodes are more appropriate for their starting class, but still giving them the option to branch out and work towards another class and create hybrid multiclass templates.

The game boasts both exciting and challenging PVP and PVE content, with a huge continent to explore and different acts to work through players have a unique story arc and exciting environments to adventure through. Moreover, the areas that players will explore are randomly generated, including to rain, creatures abilities and loot items meaning there is literally an unquantifiable amounts of replayability.

Aside from PVE, players can engage in seasonal PVP ladders and events, ranking systems and random PVP arenas that allow players to prove their mettle and earn fantastic PVP rewards.