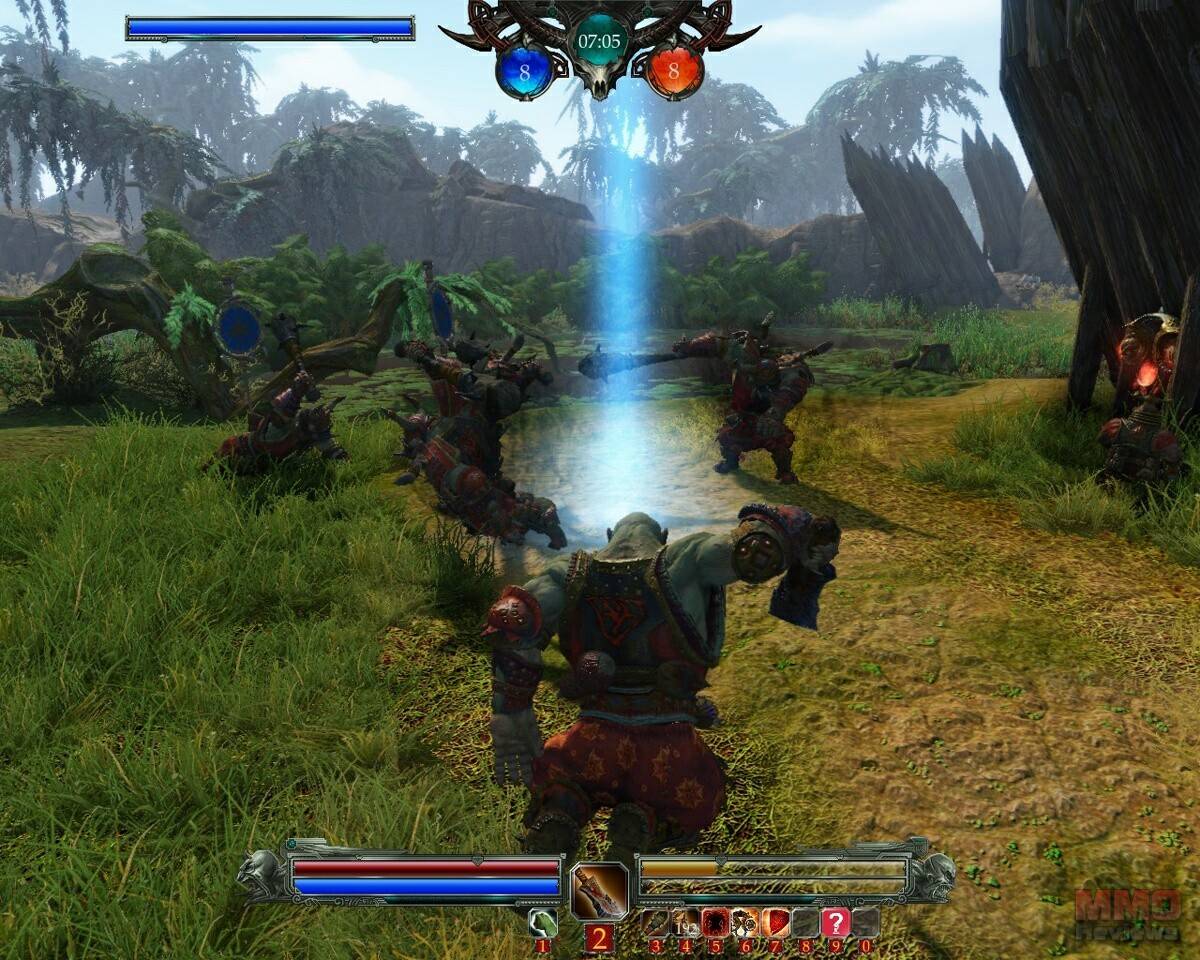 Panzar is a modern competitive free-to-play third-person action MMO focusing on team-based play while presenting role-playing elements such as character growth and experience-based levelling. Players will be thrown into a world of fantasy and wonder where the 4 inhabiting races - orcs, dwarves, elves, and humans - are at war. They will participate in team battles in various arenas to gain experience and money and are moreover able to improve their characters by learning new skills or buying and upgrading their gear during the breaks between battles.

Classes in Panzar are race-bound; there are 2 classes per race: the Paladin and the Inquisitor for the humans, the Sister of Fire and the Ice Witch for the elves, the Berserker and the Tank for the orcs, and the Sapper and the Gunner for the dwarves.

Paladin -Most efficient when healing and supporting their teammates with spells and powders, Paladins are perfectly able to hold their own in a fight as well.

Inquisitor - Having honed their skills in numerous battles, Inquisitors are ruthless killers without equal. They can spot weakened opponents from a distance and rush in for a fatal backstab.

Sister of Fire - Masters of the flame, Sisters of Fire are rarely engaged in melee combat. They are able to unleash a great swarm of fireballs and magical spells upon their enemies from a great range.

Ice Witch - The eleven masters of ice magic, Ice Witches shackle their opponents with ice spells, making them vulnerable to attacks by the rest of their team.

Berserker - Gifted with impressive power and endurance, Orc Berserkers are the unrivalled masters of two-handed weapons and brute strength.

Tank - Thanks to their large shields, Tanks are nearly indestructible mobile fortresses, quickly defeating opponents with their powerful weaponry.

Sapper - Dwarven Sappers’ battle totems help to replenish energy while their mines and traps drastically slow down the enemy. They are moreover able to create teleporters to immediately transport their allies from one point to another.

For completing a match, all players are awarded experience points at the end of the battle.  Winning players receive additional experience for their victory. Support classes such as the Paladin, Sapper, and Ice Witch receive experience points for performing useful actions that lead to their teammates killing the enemy. When having acquired enough experience, the character’s level increases, resulting in new skills and the ability to equip more advanced gear.

The game enables players to craft various items at the Forge. Crafting requires certain resources as well as the correspondent recipe. While a certain amount of various kinds of resources is granted after every battle (they can also be purchased for crystals at the Forge), the recipe has to be bought from the shop. There is a chance the item may break during the crafting process.

There are several ways to upgrade items: Armour (except for shields and censers) and melee weapons can be upgraded at the Forge for in-game currency with a 50% chance for success. A successfully upgraded item will provide an additional bonus to your character’s health or mastery. If the upgrade fails, all upgrades are lost.

There is also the possibility to upgrade items by inserting runes that are found along with other resources. When a rune is inserted into an item, the item acquires the characteristics associated with the rune, but the rune itself disappears. Only one rune can be inserted into a given item. Runes cannot be extracted or removed from items.

Panzar will feature a variety of game modes, each one playable on 2-4 different maps. For the time being, the following modes are included:

Domination - In this mode, teams vie for control of a point on the map in order to earn points. The first team to earn the necessary number of points wins. Maps are small, and the flow of the game is very dynamic. Easy to learn, Domination is a great fit for new players.

King of the Hill - At the beginning of the match, the teams find themselves in various situations. Each team’s goal is to be the first to seize the control point which then has to be defended in order to gain points. Players can make use of various objects on the map: a spawn point can be set near the control point in order to attack more efficiently and barriers and traps can be built in order to prevent the enemy from approaching the point. There is no limit to how many times the point can be captured. The first team to accumulate a certain number of points is the winner.

Meteor - The Meteor mode requires players to hunt for an object and deliver it to the enemy base.