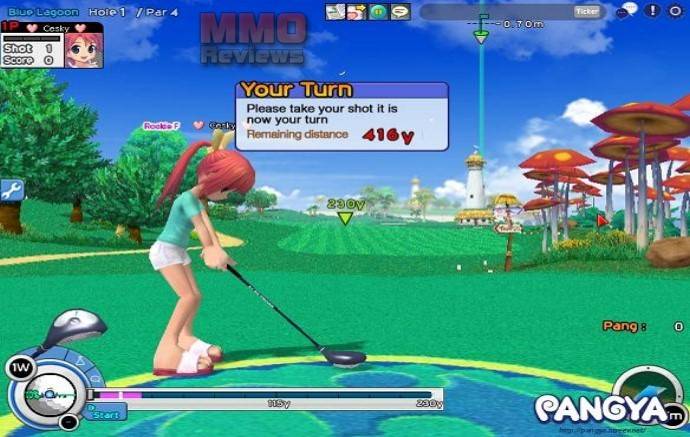 Developed by Ntreev Soft. for Windows.

Pangya is an online multiplayer casual golf simulation game. The full game is free to download, although certain special items for the game (such as clothes for characters, new equipment, and decorations) can only be purchased with real money. However, all characters are purchasable without real money, and certain measures have been taken to minimize or effectively reduce the differences between money users and non-money users. The game awards players with Pang, a currency that can be used to upgrade a character, or items to gain the upper hand during a course.

The gameplay is designed similar to most other golf games. The power and accuracy of a shot are determined by a meter located at the bottom of the screen, using the "three-click method": one click to activate the meter's bar, one click to set power, and one click to set accuracy. Clicking is either done by moving the mouse pointer over the bar and clicking, or simply pressing the space bar.

The playable characters of the game. As of PangYa season 4, there are nine.

A player will start the game with the default golf club and as player progresses, they are given the option to purchase new clubs, either using Pang or Cookies.

The currency of PangYa is Pang. Pang is normally earned by finishing a hole at par or better, pulling off powerful shots, and making difficult chip-ins. Pang can be used at the Shop to buy equipment or items. Pang can also be used to upgrade equipment such as golf clubs, or the characters themselves, boosting their stats.