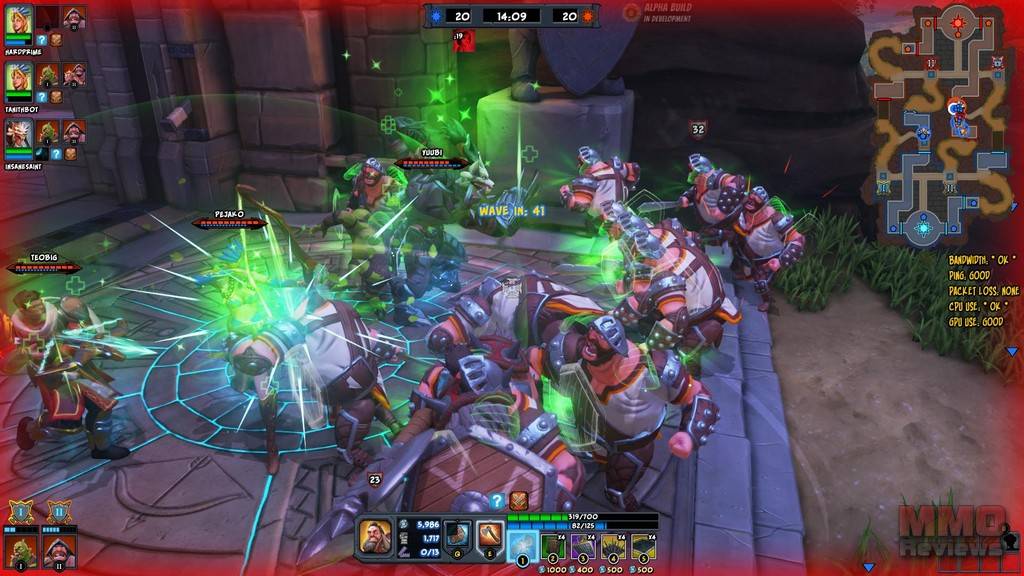 Orcs Most Die: Unchained is a new adrenaline charged PVP action MOBA where players are tasked with assaulting an opposing teams’ fortress with their friends, Guild members and allies whilst at the same time protecting their own base from enemy invaders. The game is a free to play title available on PC that is a mix of MOBA, tower defence and card collecting game is, creating an intriguing and exciting action genre.

The game puts two teams up against each other, made up of AI bots or real players to take on the role of heroes in the battle with two purposes. Firstly players must try to break down the opposing teams defences, consisting of traps, doors, extremely strong AI guardians, endless waves of minions and other players in an attempt to get 20 of their own minions into a portal at the other end of the map in the enemies base. Secondly they must stop the opposing team from trying to do exactly the same thing. To be successful in the fight players must master the art of being both a defender and an attacker to be victorious.

There are dozens of powerful and unique heroes that are on offer, starting with a selection of free heroes with a variety of different skins, and unlocking more heroes through gameplay. Heroes can use melee or ranged attacks or sometimes a combination of both and each with their own original traits and personal abilities that make each hero completely unique in play style. In battle heroes are controlled by players or intelligent AI and can take on the role of such heroes as:

Hogarth - a powerful melee focused hero with strong armour making him difficult to kill, always on the front line soaking up the damage and crushing enemies with his huge battle axe, as well as supporting nearby minions giving them additional armour with his Tough ability

Ivy - a relatively strong range support hero who is able to take down enemies with her fast ranged Longbow attack, heal allies with her Balm ability and can perform a deadly Power Shot that penetrates through multiple enemies in one single attack and can be used to disable enemy traps

Blackpaw - extremely mobile damage dealing Gnoll hero that hits hard and fast with his powerful Claw attack and health rejuvenating Bite attacks, keeping him in the fray for even longer and using his Sic ‘Em ability to summon to spirit gnolls to fight at his side

Players are able to further customise their own heroes using a wide selection of cards that they can unlock or purchase that enables them to equip their hero with a variety of traps, minions and items that they can use during a battle. Cards go into a player’s pool and they can build individual decks/loadouts choosing which cards they wish to use for a particular battle.

Minion Cards – the key to victory in the game is the first team to get 20 minions into the enemy portal and so players are able to choose which minions they want to have access to in the battle, as players level up they will unlock even stronger minions

Trap Cards - by killing their opponents in game players will earn a special currency that they can spend to laydown traps, creating dangerous gauntlets in their-based territory that both enemy minions and players must try to fight past to get to a team’s portal; these traps give a huge variety of different effects such as slowing enemies down, freezing them, setting out fire and crushing them