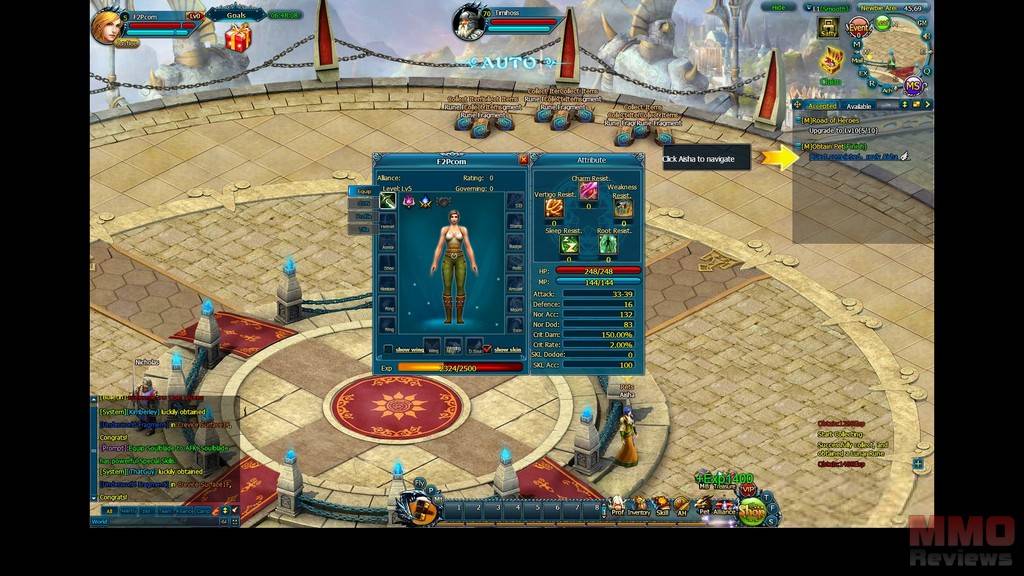 Odin Quest is an isometric massively multiplayer online role-playing game based on Nordic mythology that can be played for free in any internet browser. Players are put into the shoes of a powerful hero to set off to a thrilling and adventurous journey. Travel to new worlds to discover new lands, encounter exotic and mysterious people and fight against the most perilous and lethal monsters.

Odin Quests offers 5 distinct classes players are able to pick from, each of which provides a different play style to cater to diverse player preferences.

With a quick click of their skill button, players are able to learn new skills when receiving skill points. There’s a certain number of skill points needed to learn a specific skill and various level requirements to be met.

In the course of the game, players will discover a variety of pets they can obtain and add to their collection. They will receive their first pet quite early on as a quest reward. Pets are represented by their own graphic that follows players around in game when dispatched, and each possesses their own character sheet.

Pets are also able to gain XP and will subsequently increase their level as well as a variety of stats, including Accuracy, Crit Damage, Crit Rate, Dodge, HP, MMP, and Attack, to enhance their combat proficiency.Pets moreover have their own pet skills and talents which can be bought at a shop (in the form of a scroll). Pets even have their own name and can be renamed by players!

Players will continuously be rewarded for playing, typically receiving rewards from NPCs when handing in a quest (while also gaining EXP at the same time) or from mobs and bosses they have killed in dungeons. There are moreover various Server Events running for a few days at a time player can participate in to engage in friendly competition where the best competitors earn valuable prizes to help them in the game.

There are also multiple icons in the user-interface with timers that indicate when a reward can next be collected. By clicking the icon, players instantaneously receive a random item, e.g. a weapon, potion or another helpful item. Once claimed the timer starts again, encouraging players to stay in game to keep claiming their free rewards.

In addition, players can share the game via Facebook once a day to send out an invitation to all their Facebook friends inviting them to play. For sharing this invitation, players receive 10 coupons to reward them for their efforts.

Players have several automated functions at their disposal which are implemented into the game to make playing significantly easier:

AFK Mode: Players don’t even need to be in front of their computer to play. With AFK mode, their character will automatically kill any creatures required by a specific quest, which is especially useful for continuous quests that require killing hundreds of the same creature.

Auto-Run: By activating a link in the quest log, characters will automatically move to the required location to complete a quest.

Auto-Potions: Equipping their character with multiple potions allows them to be automatically used as soon as they are needed.

Auto-Attack: Players don’t even need to target monsters, clicking a button will make them continuously attack the monsters required for completing their quest.

Portals will instantly teleport you around the world to various instance-based areas to complete quests. There’s an automated feature in the player’s quest log that can be clicked that will auto-run them to the location of their quest objective, which means they don’t have to wander around for hours lost trying to find where they need to go.