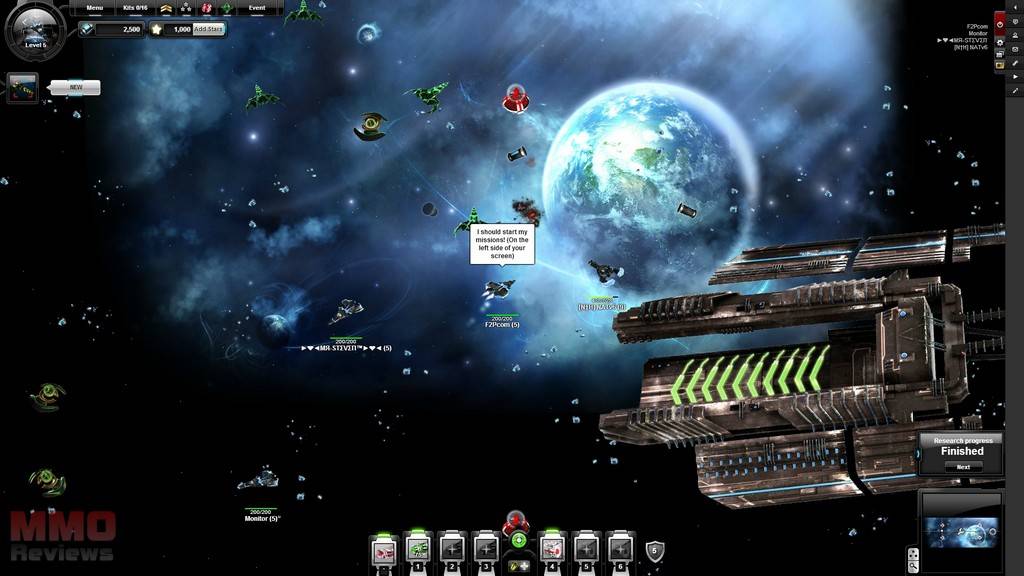 In a distant galaxy a war is raging, a battle over resources as individual starfighter pilots battle against the enormous armadas of numerous alien factions in a battle of domination where the most powerful and skilled pilots are both respected, worshipped and feared. Nova Raider allows players to be one such pilot in this fast-paced space shooter where they will choose from a variety of classes, numerous ships and a whole host of gear customisation options to fit out their ships as they head into the great unknown. Accessible on a number of different platforms, from Windows client to Facebook browser compatibility and iOS app download, the game is completely free to play and suitable for all ages.

The basic premise of Nova Raider is for players to explore the progression based content in a space shooter environment, using simple mouse point-and-click movement the game has been designed with multiple platforms in mind. By completing the mission-based content players will be taught how to play the game and get the most of its features, earning both XP and the Uranium resource (the primary in game currency) players will be able to unlock new features, content and spend their currency to upgrade, advance and customise their ships.

At level 8 players get the chance to choose a specific class role, in the class selection menu they will be able to watch a YouTube video for each class to discover the benefits and cons of each type of ship. Ship Classes are primarily determined by the number of points they have in the four main stats: Attack, Defence, Support/Drones/Healing and Trading; the ships will have a primary strength in one of these four, but subsequently make them weaker in the other three.

Tank Class - these ships are the frontline attackers that have both heavy armour and stronger shields than their counterparts, giving them a high Defence rating, they are also able to use their own EMP bombs, but they greatly lack in offensive firepower

Raider Class - this class is all-out Attack, using its speed and unprecedented firepower it can move quickly into battle, take out its targets and then quickly retreat before its weak Defence lets it down making it a classic glass cannon

Support Class - these ships are built primarily to take a backseat in combat, focusing less on fighting the enemy and instead keeping their allies/teammates alive using a variety of heals and buffs, they are also exceptionally skilled at taking out enemy drones

Trader Class - as gathering resources is one of the key ways to make cash in the game all ships are hindered by a smaller cargo hold, with the exception of the Trader who is able to hold far more minerals to take to Market however it is the weakest ship in combat and extremely vulnerable

Balanced Ships - not so much a class, but ideal for those players that prefer to have no particular superiority nor weakness, with its four main ship stats being completely even it makes for a good all-round ship capable, but not excelling, in most tasks

There are a variety of resources that players must gather in the game:

Minerals - found floating around space players can pick these minerals up and either sell them or, once they have gathered enough, convert them into powerful gems

Gems - made from minerals gems have various passive benefits associated with them and players can equip them to their own ships, switching them in and out as the situation demands increasing firepower, critical chances, defences and more

Uranium - gained in a variety of different ways Uranium is the main currency used to purchase new ships, fund research to unlock new technology, resupply and repair your own ship and more