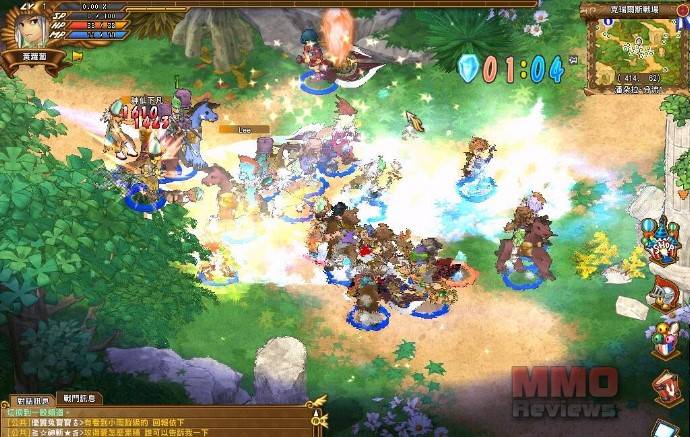 Pet system
Innovative pet system with a maximum carrying capacity of 10 pets. Players are able to arrange pet formations according to their preferences and to maximize pets’ abilities.

Battle machine
The robot has been transformed into a battle machine from a mining tool and by implementing slaying skills, its power and practicality have been substantially upgraded.

Instance battlefield
The game allows players form teams and open instances to avoid issues such as overcrowding, lack of monsters or fighting over monsters.
Joining existing teams upon entering an instance allows easier and faster team formation. There are different rewards for stages with different levels of difficulty. Both novice and veteran players can select levels of difficulty that are suitable to their character level.

Specific fighting targets
Illustrated Handbook of BOSS and treasures dropped by BOSS are provided in the game for players. Whichever equipment or skill the players are looking for can be found easily.

Victory speech
After defeating BOSS at all levels, champion who delivered the final killing blow will be able to display his or her victory speech, which is entered in advance, on all players' screens.

Before Gaia and Uranus created heaven and earth, and Polomis and Athena created humans, the world was filled with chaos. Seeins the world in turnoil, Zeus, the leader of the gods, led the 12 main gods and moved to an island in the sky, separate from the ancient land, in the hope to create an ideal society.

Thousands of years passed. Under the protection and benevolence of the gods, humans lived a safe and comfortable life, which made them forget the once chaotic and difficult times. However, as went by, Pandora thought of the box given to her by Zeus. In the urge of keen curiosity, she eventually opened the box. It was like dropping a stone into a tranquil lake. Shadows and strange phenomena started to appear like ripples spreading around the world. The once peaceful and joyous world is now gradually taken over by chaos and fear...

Helpless people turned to their Gods for consolation, but even the Gods do not know the origin of this string of sudden disasters. Only Athena became conscious that there seemed to be some power behind all of the strange phenomena. To uncover the truth, she has summoned you before her and hoped you can assist her in finding more clues.

In order to maintain the peace and prosperity, as well as to protect your beloved one, you pick up your weapons and set of to protect the things and people that you treasure. No matter what lies ahead, you will defeat against all odds and protect this world until the end.

There are four initial compementary classes.

Warrior
The skills of a warrior mainly include all kinds of physical attacks, such as individual powerful attacks, small-scope group attacks, reinforced skills that boost survival rates instantaneously, and various other attacks and defense skills. They bring much higher survival rates for warriors than other professions.

Master
The skill of a master is mostly extremely powerful element-attack magic. Compared to other attack skills, the scope of magic attacks has longer reach by far. With the help of some supplementary magic tricks, such as instant moving and magic shield, and when master's reinforced life-saving ability is combined with Passive Combat Skill, the element-attack power can be strengthened and make the master’s group destruction power the mightiest among all classes.

Pastor
The main skills of the pastor are for recovering and assisting teammates’ magic, but a pastor is still capable of releasing attacking magic as well as certain rather powerful passive combat skills compared to other characters in the game.

To join a Siege War, a Guild Leader must register the guild as Attacker or Defender, two hours prior to the Siege War. Other players or players who belong in guilds but the Guild Leaders do not register will automatically become the third party and are free to join and acquire merit anytime during a Siege War.

At the first Siege War, none of the main city is occupied; therefore, there is no Defender. All guilds may register as Attackers to try to take over the city. For a guild that has occupied a city in a city war, the default is defender and it may not register as attacker. All guilds registered as attackers at this time are treated as an alliance of attackers.

A guild may occupy only 1 main city at any time and not multiple cities. If a guild control a city, can enjoy different benefits.

In order to make someone your Mr. or Mrs. Right, you have to start by making friends with one another. Once you have a better understanding of each other, you can then add him or her to your love diary. When you add someone to the diary, the system will assign an affection degree for you, from 0 to 50.

When someone has been added to your love diary, based on the pursuing actions taken by of the pursuer, you can see what kind of relationship you are in with that particular character. There are nine stages: Acquaintance, Crush, Puppy Love, Infatuation, True Love, Promise, Happiness, Selflessness, and Protection. These 9 indexes require different affection degrees.

Marriage requierements
- Both man and women must be single.
- The love index must be "Infatuation" or above.
- Each must have an Acarra Diamond.

In the world of Gaia, there is a special production technique that can turn ordinary materials like potions and minerals in to various kinds of magical items. People call it “Alchemy.” The five categories of well-known alchemy are Red, Blue, Yellow, Green, and Star. All alchemies require different materials from on another and their results will also be different.

The Gods decide to pass on the alchemical knowledge to you and hope that someday you would use the powerful items you produced to defeat the evil force.