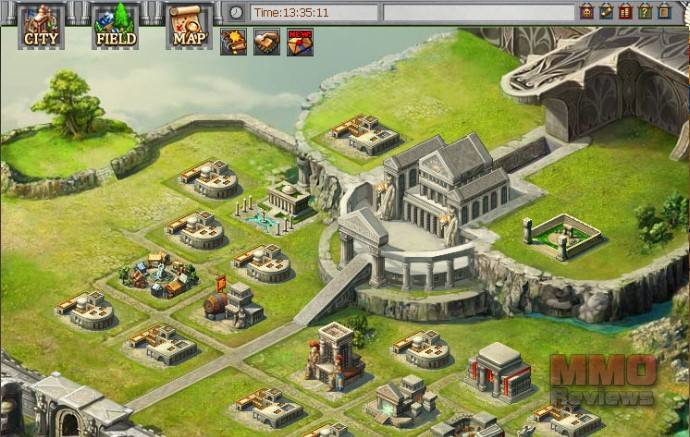 Developed by Koramgame for internet browsers.

Mythopolis is a free browser-based strategy game based on the history and mythology of ancient Greece, where players construct cities, train armies, and hire legendary heroes and gods to battle alongside their friends in an epic struggle for world conquest.

For many years, the men and gods of Mythopolis lived together in peace. But disaster and confusion suddenly struck when the Fates, the all-knowing oracles of Mythopolis, suddenly vanished. Frightened and directionless, men began pointing the blame at each other, splitting open ancient rifts, and eventually leading to an all-out war between the three great nations of Troy, Athens, and Sparta.
The suddenness and mystery surrounding the disappearance of the Fates left the gods themselves shaken. Appalled by the escalating war of mankind, many turned their backs on men, but some joined the war, either for the love of battle or for their beloved mortals. Powerful gods on either side merely escalated the destruction caused by the war, and soon none of the three nations were left standing. The people scattered throughout the lands, and formed smaller, warring factions, waging ceaseless war with their neighbors under the watchful, silent eye of Mount Olympus.

With so many individuals struggling for dominance in a broken world, the people pray for one who will successfully revive this ruined city, rekindle the hopes of men, win back the favor of the gods, and bring unified peace once again to Mythopolis…

The great nations of Troy, Athens, and Sparta have all but fallen, and their survivors are scattered throughout the land. But true to their own traditions and cultures, people from each origin still retain their own unique traits:

Athens
Civilized and cultured, excelled in the political arts and often called the “birthplace of democracy”. Those who hail from Athens utilize their advanced technology for longer building queues and construct faster caravans, and their Diplomats have a profoundly stronger effect in enemy cities.

Troy
Wizened veterans in the ways of anti-siege techniques, Troy’s silos can store twice as much as that of any other nation, and their caravans are considerably more effective at transporting resources.

Sparta
Militaristic and often seen as barbaric, their skilled warriors lack the weaponry and technology that Athens has, but they possess excellent scouts and are masters of swiftly plundering a city’s resources.

In Mythopolis, a leader’s army is commanded by a hired hero, a powerful mercenary selling their services to the highest bidder. But a leader with a prosperous city and a high enough reputation will be able to earn the favor of certain gods, and even call back legendary heroes from the Elysian Fields in the Underworld. An army’s soldiers can ride confidently into battle with a general like Ulysses, Hercules, or Athena leading the charge!

Heroes in Mythopolis can also train and compete in the Stadium, where they can set aside their current alliances and challenge heroes all over in fearsome duels, matching strength and wits with the greatest warriors to have ever lived.

The Zodiacs are a group of gangs and ruffians who profit from the war by taking advantage of those weakened or otherwise incapacitated by battle. Armed and aided by the mysteriously powerful Zodiac Tokens, they’re indiscriminate about whose cities they ransack and destroy. Only a city’s hero or trained army is strong enough to defeat them, and the Zodiac Tokens they collect can enhance a city’s troops and construction workers.

Mythopolis is fully integrated with Facebook, making it easily accessible for players, and allowing them to share their feats and accomplishments with friends. Friends can form alliances with each other, challenge their heroes in Stadium duels, or attempt to completely demolish each others’ cities and pillage their land.