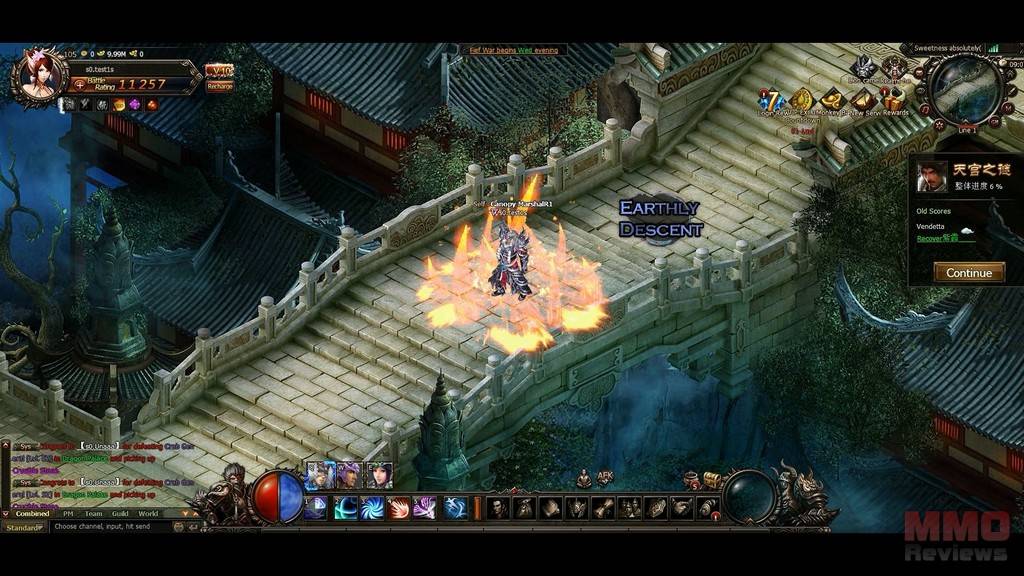 This browser-based free-to-play MMORPG is an action-packed fantasy adventure based on the Journey to the West novels, were players step into the shoes of one of the four heroes of that adventure; Fox, Bull, Iron Fan and even Monkey himself, together these for will restore peace to the heavens fighting against those that threaten it. In Monkey King Online players must train up their own abilities, discover powerful weapons and armour and even gain the favour of the Immortals to help them in their task.

One of the larger aspects of the game is based around solo play players will be able to engage in more content if they choose to team up with other players and work together cooperatively, keeping with the spirits of the original novels of working together to overcome difficult challenges. Players can group up to head into difficult multiplayer dungeons or create a permanent Guild where they can fight other Guilds for territory and resources.

There are four key characters that players can play as in the Monkey King Online:

Monkey - this lovable hero has spent the last 500 years imprisoned, but has finally earned his freedom and is as mad as he ever was. This ambitious character has learned mystical abilities and is able to morph and cloud hop among other things, all powers that he learned from a learned Taoist master. Armed with his trusty cudgel, is magical abilities and his companions monkey leads the charge into the heavens to do battle!

Bull – a sworn blood brother to his companion, Monkey, this stubborn and powerful fighter is Lord of the Fire Mountains, swearing both his allegiance and his mighty battle axe to help his friend he uses physical force and brute strength to fight his enemies. When Bull is angered he can take on a bullheaded form, a powerful form that will bring devastation to those in his path. A companion to Monkey he is also married to Iron Fan.

Iron Fan - the wife of Bull, this beautiful princess uses her elegance and graceful techniques with her thyrsus weapon to give aid to the group, typically found at the border between heaven and hell she has mastered the nature of magic art forms and is able to bend her environment to her will.

Fox - similar to Iron Fan all is not as it seems on the outside for this curvaceous female, filled with cunning and guile she is an exceptional warrior, able to hold their own against even ancient immortals that dwell up in the heavens. Using her fused magic she enhances her own combat abilities, using sword and spell to fight those who would stand against her.

The game itself has built into it an AFK mode that allows players to step away from their computer when needs be and their character will continue to play the game without them, everything from fighting enemies in the area, using potions to restore mana and health, using particular skills and abilities as well is returning to a safe haven once the fighting gets too much and they are depleted. AFK mode can be activated by pushing the A key and your character will instantly go on cruise control until you take them out of this mode.

Another simple feature to help people get around in an automated fashion is the auto pathing feature, using hyperlinks in quests and journal logs players can click them and their character will automatically start running to the next NPC they need to visit or to the required area they need to visit to complete the quest.