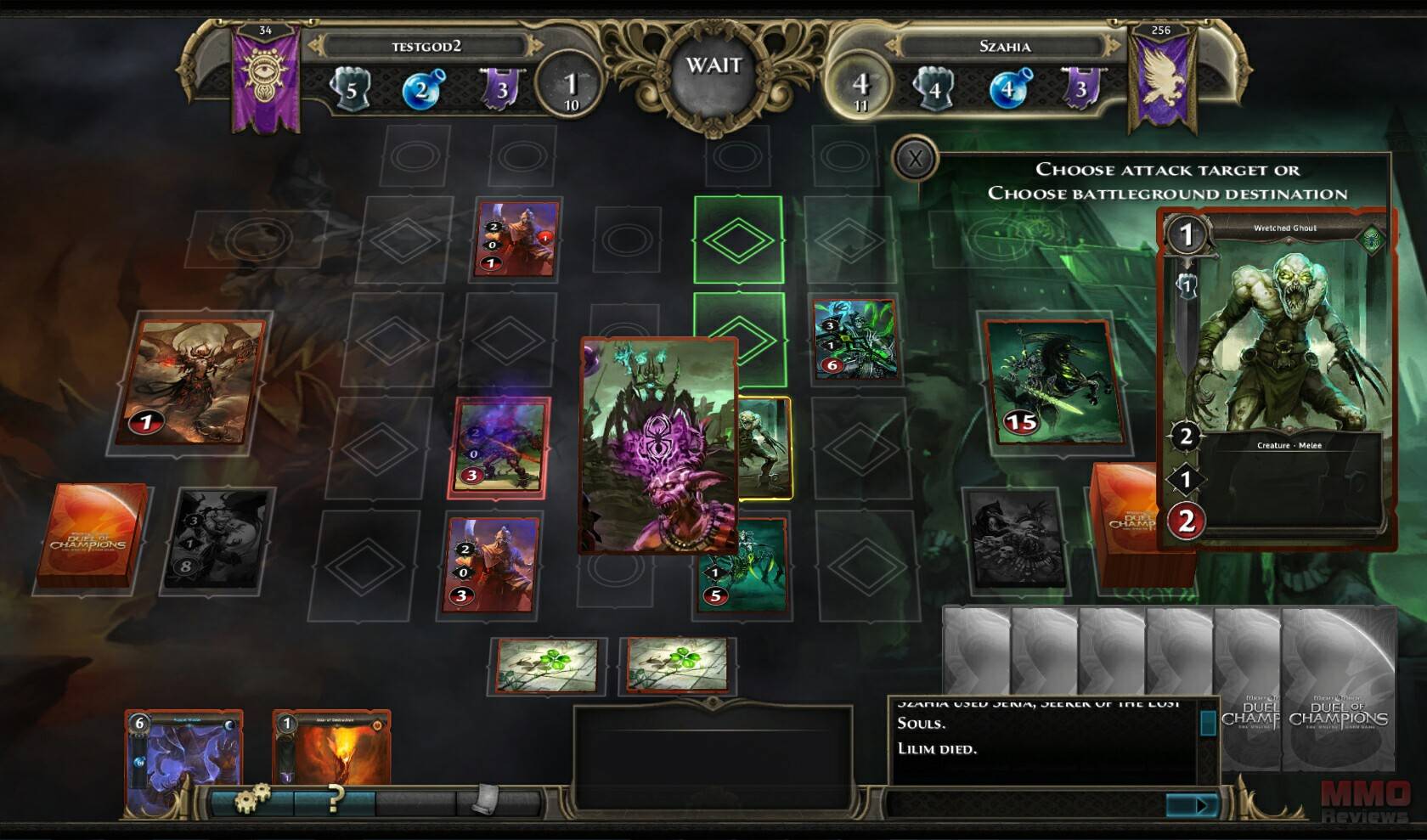 Might & Magic: Duel of Champions is a free to play trading card game where players get to build their own deck of cards made up from various heroes, monsters, spells, fortunes and events and go head-to-head against other players in one-on-one arena battles trying to destroy the enemy hero.

The game is made up of hundreds of different cards, from common and easy to get cards to rarer and even legendary cards that can be used in infinite numbers of ways to create your own tactics and strategies in battle. Completely free to play players are able to access all the game’s content without spending money.

The purpose of the game is to try and beat your opponent in one-on-one combat using a number of different cards in your available deck that you have hand-picked depending upon your strategy. Players take it in turn to place as many cards as their resources will allow, resources that are built up over time and are required to place different types of cards. Cards of all types will have a resource prerequisite that needs to be met before that card can be played, typically each card type (Creature, Spell or Fortune) has its own resource, but some cards, particularly creatures, may have prerequisites on more than one resource type.

As well as resources players accumulate action points each turn (starting with one action point in the first turn), each card has an action point cost to actually be played, so players must choose wisely which cards to put down during their turn. The more powerful the card the higher its action point cost and resource prerequisites will be, ensuring players cannot simply throw down powerful cards from the offset.

One of the main aspects is the game board where players can place creatures/units that can be then used to try and attack the enemy hero in an attempt to reduce it to 0 hit points, which would win in the game. To counter this players must put down their own creatures to block and direct line of sight to their own hero, which ensures played unit cannot attack it directly and must fight their way through the units blocking its path.

Players must have a minimum of 59 cards in their deck and a maximum of 200, cards which are drawn at random from your face down deck during a fight. Potential the strategy is staggering and new attack combos and tactics are created all the time with the constant stream of new cards being added to the game.

Might & Magic: Duel of Champions has six available factions, and each one focuses on a different style of gameplay and has unique creatures:

A player begins the game by choosing from one of the three starter decks: Haven, Necropolis or Inferno, were each deck is made up of a chosen hero, creature cards, spell cards, fortune cards and event cards.

Spell Cards - Spells are used in a number of different ways, from attacking creatures in play, moving creatures around the battlefield, healing and damaging heroes directly, and many, many more uses. Each spell comes from a school of magic, each hero has one or more schools of magic available to it, meaning players cannot have any spells other than those from a magic school their hero knows. Spell cards require the Magic resource to be placed.

Players can acquire cards by initially going through the PVE tutorial playing against AI opponents, but typically they can be bought from the store with gold, which is acquired simply by playing matches, and “seals”, which in many ways is the games premium currency. Seals are earned as you level up, as by playing games you will earn XP, and also by completing various achievements, as well as being purchasable with real-world currency.

From the store players can purchase packs of cards and boxes (for more money but which have more cards), which will give a huge selection of random cards, meaning players won’t necessarily get the cards they want/need for their deck. However MMDOC has also implemented two handy features for players: