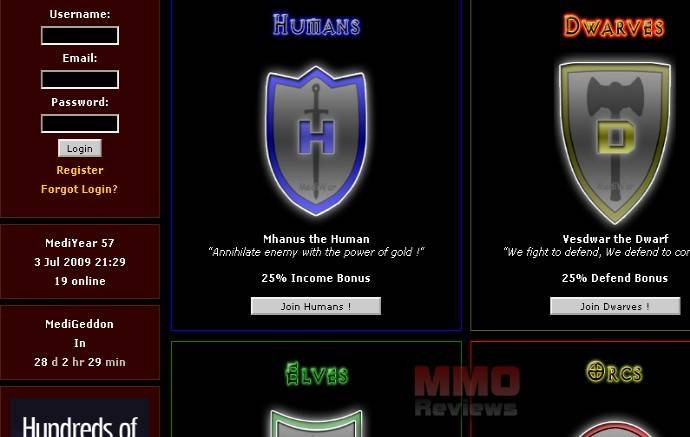 MediWar is a Massively Multiplayer Online Role Playing Game, to play in a Internet browser, with over 100,000 players. Players can choose one of four races: Orcs, Humans, Elves and Dwarves and build armies, recruit friends as officers, buy weapons, and spy and attack on each other.

In a far away Medieval land, there exists 4 different races, Human, Dwarf, Elf and Orc. Warriors from these 4 races fight against each other trying to outshine the rest to gain glory and fame...

- Humans know how to capitalize every single resource. With the same resources as other races, Humans are able to generate more revenue. They are also cunning merchants. They know how to bargain for the best price when buying and selling items. When Humans are being pillaged, part of the plunders seems to be junk for other races simply because other races do not know how to capitalize those "Junk" plunders. Humans believe in the power of gold. With gold, they can do anything, even annihilate enemies !

- Dwarves have the most knowledge in all kinds of defensive techniques. With the correct resources, they can build the most complex fortress which always demoralize attacking enemies. Even with simple materials, they are able to build the best defensive structure among the other races. Dwarves are born with hardy build which complements their defensive strategies giving enemies a hard time damaging them. Dwarves believe that as long as their defending fortress is there, they can eventually conquer their enemies !

- Elves are born to be sly. They know every single technique to spy, to steal, to be "invisible". They are able to go into spy missions with the least resources among the other races. Most of the time when they are back from their recon mission, they bring much more than just information. Knowing their enemies as well as themselves, can help them to out-smart every battle. Elves believe to rule their enemies with enemies own resources !

- Orcs have the best offensive skillset in battle. Their enemies will never know how to defend against Orcs weird battle tactics. They are always able to cause massive destruction on anything. Along with their amazing offensive strategies, Orcs are born with strong build that greatly enhance their offensive power. Orcs believe that there will never be a defense too great for them. Destruction is the way to vanquish their enemies !