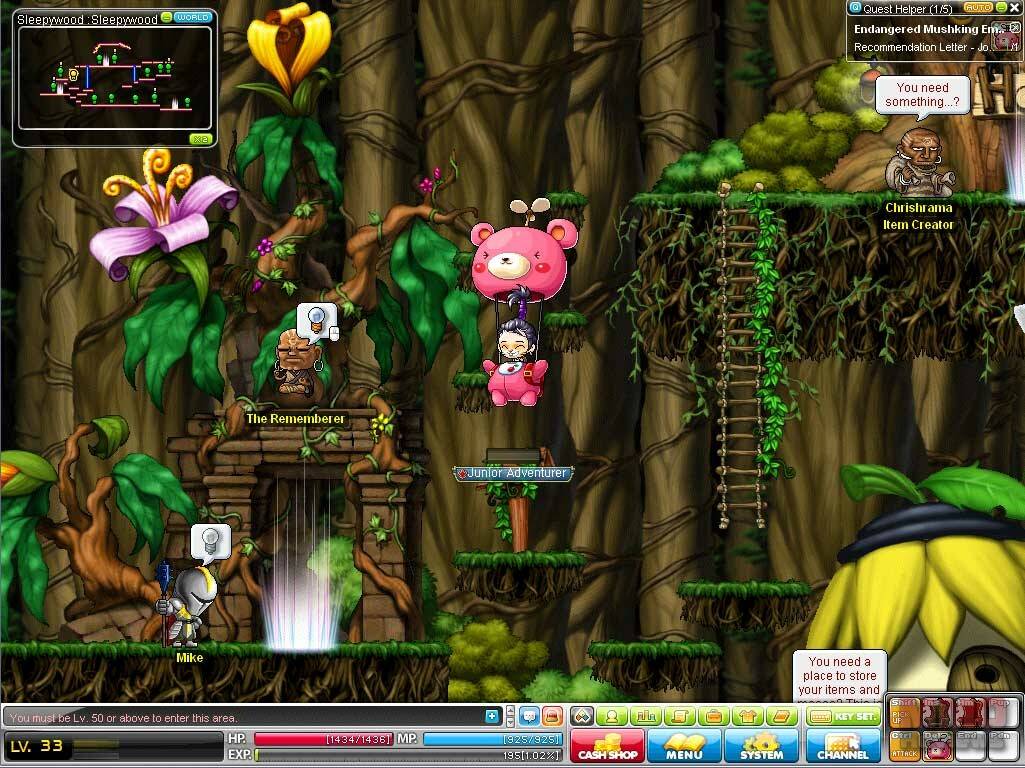 MapleStory is a free to play side-scrolling MMORPG that has over 50 million subscriber accounts in all of its versions. The game counts with unlimited opportunities to customize the character, like hundreds of different hairstyles, facial expressions, and equipment pieces.

In the game, players travel the “Maple World”, defeating monsters and developing their characters’ skills and abilities as is typical in role-playing games. Players can interact with others in many ways, such as through chatting, trading, and playing mini-games. Groups of players can band together in parties to hunt monsters and share the rewards. Players can also join a guild to interact more easily with each other.

There are four main continents common to all versions in the MapleStory world:

- Maple Island is where every new player begins the game. The beginner-friendly island features low leveled monsters and short tutorial quests to introduce players to different aspects of gameplay. Once a player leaves the island (requires 150 mesos or a recommandation letter), they are unable to return to it.

- Masteria is a new continent that is believed to be off the coast of Victoria Island. There are only three towns on this continent: New Leaf City, the Prendergast Mansion and Crimsonwood Keep.

- Victoria Island is where players arrive after leaving Maple Island. The island has eight cities, and is where Beginners will upgrade to their first class.

Classes evolve through four different stages: Explorer, Cygnus Knight, Hero and Resistance. In the first phase, explorer, players will have to choose between six different jobs:

Beginner - Beginners are great for training and learning the ins and outs of Maple World, It’s an Explorer-in-training who's learning about the Maple World and preparing for the grand adventures ahead.

Bowman - Possessing both dexterity and strength, the Bowman is a class that strikes at foes with pin-point accuracy. For this class, a higher level means faster and more powerful attacks.

Magician - Magicians have lower defense and HP than other classes, but in exchange, they possess flashy elemental and support spells that are useful in a party.

Pirate -The Pirate can fire a gun with incredible accuracy or use physical attacks to pummel enemies. The Pirate hangs out by Nautilus, which is docked at the southern port of Victoria Island (the first area for players).

Thief - The Thief has incredible speed, high avoidability, and powerful attack skills to support low HP. The Thief can overpower foes with a single powerful attack, or dodge attacks quickly in moments of danger.

Warrior - The Warrior possesses high attack power and HP, and is best suited for the frontlines of battle. It has a powerful normal attack, but demonstrates even more power by learning advanced skills through Job Advancements.

Players can fight one another in a zone called "Battle Square," which features unique fighting maps where players can fight in Battle Mode to earn EXP and Battle Points. Battle Points can be turned in for Gallant Emblems which can then be exchanged for Battle Mode items. To get to the Battle Square, talk to NPC Maximus. You can find him in most towns.

There are four leagues of competition to ensure a fair playing field. These are based on your character’s level: Rookie (levels 30-69), Gladiator (levels 70+), Veteran (levels 120+) and Legend (levels 180+).

There are also four ways to battle:

Free-For-All - Everyone battles each other, with unlimited lives during the battle.

Ice Knight - One player is transformed into the Ice Knight, and the others must defeat him. The challengers have unlimited lives during the battle.

Capture the Flag - Two groups battle each other, with unlimited lives during the battle. The first team to successfully capture and score with the opposing team's flag three times wins, ending the match.

Team Match - Two groups battle each other, with unlimited lives during the battle.

Players can play various mini-games, both solo and multi-player.

Gachapon - It is a vending machine, in which the player inserts a ticket bought from the Cash Shop and a random prize comes out.

Rock, Paper, Scissors - It is based on the actual game, in which one plays against an NPC.

Fishing King - It is currently available in TaiwanMS and ThailandMS. After the player completes a quest to obtain a diving suit, he or she is sent to a map to catch fish. The player may return to catch fish as many times as desired.
*The Fishing System is currently available in all versions except KoreaMS, GlobalMS and EuropeMS. Players can buy fishing equipment from the Cash Shop and talk to an NPC in various towns to go fishing.

Omok - It is the Korean cognate of the Japanese game “Gomoku,” akin to tic-tac-toe. To win, a player needs to place five pieces in a horizontal, vertical or diagonal line.

Match Cards, also known as “Concentration” - It can be played with grids of 3×4, 4×5, and 5×6 cards. The facedown side of the cards contains images of various monsters, which players take turns matching.