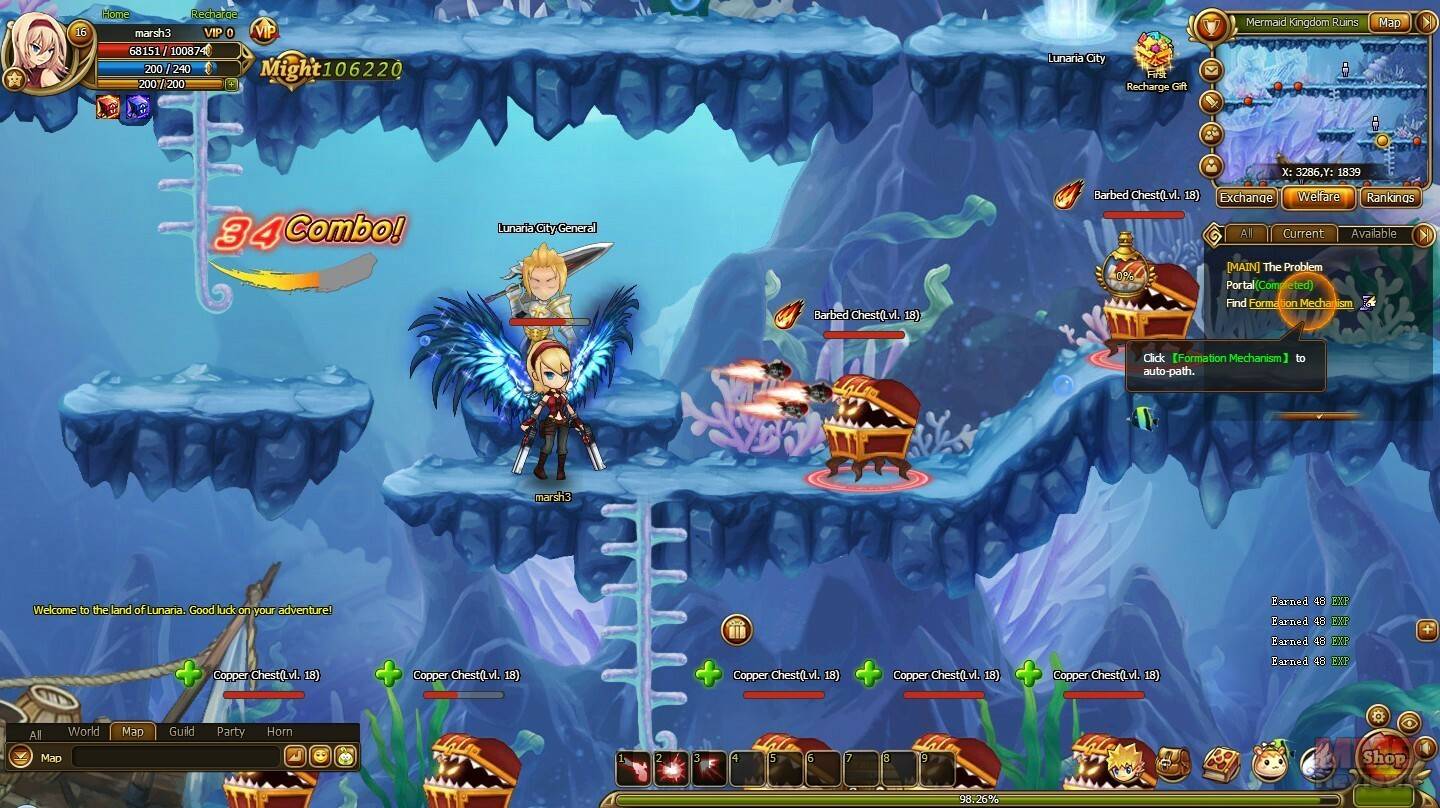 The game is a free-to-play 2D, side-scrolling, MMORPG that features simple, but impressive gameplay and delightful graphics. It incorporates several new mechanics as well as popular elements of other massively multiplayer online role-playing games. Players can fight cool monsters, go on thrilling quests and train pets which join them in battle.

In Lunaria Story, the Tablets of Power, which the people had once received as gifts from the gods, have been stolen and corrupted and an evil energy has permeated the land. Now, players are thrown into the middle of a struggle to reveal the evil forces behind what is going on and put a stop to them.

In Lunaria Story players can choose between three different playable classes, each with unique skills and abilities:

Players can equip their characters with gear that provides stat boosts and enhances might. Each piece of gear has its own level which can be enhanced to raise its stats. In order to create even more powerful equipment that can be further enhanced, player can use the synthesis system. They need a piece of equipment as a base as well as certain materials and synthesis scrolls.

Lunaria Story includes a complex pet system which allow players to tame and train useful compainions. Pets can increase character’s might, and provide important stat boosts in battle. Players have to feed them to make them happy. Players can have multiple pets, each with their own strengths and weaknesses. Moreover, pets can be merged, with the resulting combination carrying over the best attributes from each. Players are able to choose what the new pet will look like after merging.

In the game players can customize the look of the faces of their characters. In addition, they may select from a number of tops, bottoms, and shoes. Equipping special suits not only provides stat boosts, but also allows players the opportunity to look like some of their favourite characters from other popular stories and games.

The game offers wildly fun PvP, reminiscent of classic 2D fighters. Amongst others players can engage in the following PvP events:

Lunaria Story provides many daily instances, in addition to the traditional daily quests and events. Players can party up with friends, battle waves of enemies, or take on powerful bosses.

A quite original instance is Romantic Interlude that requires a party of one male and one female character. Married couples receive special buffs upon entering and gain double rewards for defeating five waves of monsters as well as the final boss.