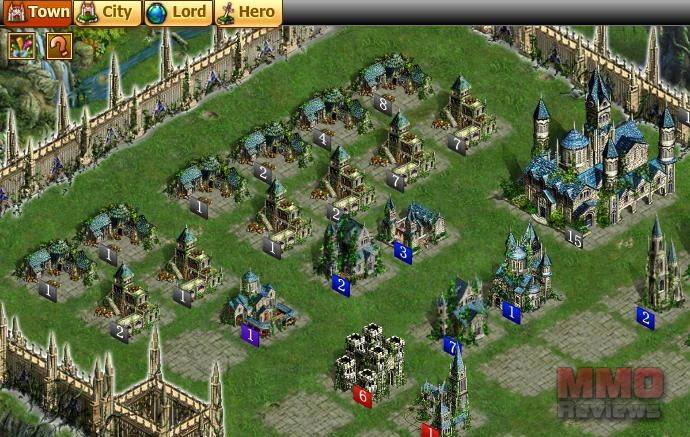 Lords Online is IGG's newest SLG&RPG browser-based flash game that utilizes the classic combat rules set down in Advanced Dungeons and Dragons. And it has been deemed the 2nd generation in browser-based gaming. Lords Online provides two map modes for players to choose from: Lord mode and Hero mode. Those who love the detached SLG style can use Lord mode and focus their attention on city development and arms coordination, while those who prefer RPGs can choose Hero mode and experience epic adventures. Lords Online encompasses a variety of heroes and battles, providing far more choices for players. The story is set in the mystical land of Mu. On this continent, several races live amid a constant struggle for supremacy. With intricately designed heroes, military bases and camps, as well as sharp graphics and landscape imagery, you will feel as though you’re there, giving the commands to engage in battle yourself!

- High Quality Graphics; The exquisite graphics featured in Lords Online form a fantastic game world that you will spend countless hours roaming and conquering the land. Among other browser based games, Lords Online stands out as particularly good, with fine detail included in the verdant landscape.

- Creative movable maps; Currently, most browser based games available are very static and do not allow for much movement or action. However, in Lord’s Online, players have many features that cannot be found anywhere else.

•Hero led troops can be seen on maps.
•Troops must navigate around various landforms and natural barriers, adding a sense of realism to army movement and strategy.
•Heroes can settle at any spot on the map.
•Heroes can attack one another.
These features provide the following advantages over other BBGs
•They intensify player interaction.
•They encourage hostile encounters such as siege war, and hero interception.
•Produces in game hostilities and actions that simulate reality. Such as befriending distant states and attacking unruly neighbors.

- Strong Alliance system; The specially designed alliance system enables players to ally with others and fight against their enemies together, which enhances player interaction and fosters the growth of a passionate player community.

- Governing isn’t as easy as it looks on CNN; Lords Online takes a realistic approach to governing, giving players the ability to deal with various political affairs, such as comforting citizens after attacks and disasters, collecting taxes, producing resources for military and economic use and so on. Can you manage the situation at home while also engaging in battles against foreign enemies?

- Cultivate heroes to fight for your kingdom; Lords Online is a browser based strategic war game, but it also includes many aspects of RPGs, which is the leveling and cultivation of heroes. Heroes are a crucial part of an army, as they are on the front lines providing leadership and guidance to troops. For their part, heroes can earn experience, increase stat points to upgrade skills and be equipped with various kinds of armor, not to mention the special skills and magic that are available.

- Rich array of military units means more intense strategies; Each of the three races in Lords Online has 10 military divisions. With 30 military divisions, the unique siege war system, legions of heroes, reinforcements, scouts, and plundering there are countless strategies to master and an almost limitless variety of choices for attacks. Fight with hand to hand, or with ranged and mana based spells or send an armada to wipe out the opposition. It’s all up to you.

- Player controlled combats; Lords Online inherits all the qualities of a traditional SLG but breaks the mold of traditional browser based games. With features that include cultivation of heroes, equipped armor, legions of military units, plundering , alliance building, and governing functions, Lords Online provides players with a truly memorable experience that will keep them coming back for more. Experience the browser based game that plays like an MMO today!

It happened not so long ago; a raging flood came from out of nowhere and devastated the world as we know it submerging buildings and sweeping people away in its swirling chaos. Prince Coss scrambled to gather all of the survivors together and flee with them to the safety of the Mu Continent. A place hidden deep in the depths of the ocean purported to be peaceful and richly endowed. The people of Clude welcomed Prince Coss and his people with open arms and generously offered them a piece of their abundant land. Unfortunately the peace there wasn’t destined to last for long; the Silver Dragon Costa soon approached with it’s thousands strong army and invaded the plain.  They were driven by their greed and hatred for all that is good…

The war was fierce and bloody; with many a good man losing his life.  Prince Coss and his loyal supporters finally overcame Costa and defeated him.  But not before Costa was able to put a deadly curse on Coss’s sword, (Silver Dragon Wings).  With no other choice available to him Coss had to destroy his faithful weapon.  The craftsman, Bathory was chosen to do the deed but the temptation proved to be too much for him, instead of smashing it he refined the mighty blade into a small crystal and stole it away into the night.

The plain that was occupied by Coss and his followers became know as God’s Favor. On its vast and spacious plains they set up the country of Flange and Coss was crowned the King.

But the peace on the Mu Continent was not to last. The Beard tribe made plans to split the land of Clude into two separate kingdoms – Shaba; which advocates power and discipline and Alec; which lives under the rule of magic and peace.  But the Beard didn’t stop there they also summoned legions of deadly blood sucking leeches to help them invade.  But worse than that, they managed to get their hands on the Silver Dragon Wings.   With the weapon and the leeches on their side they launched a sudden and violent attack on Alec and declared unholy war on Shaba.

But even in these trying times a small glimmer of hope shines… The humans, their robots and Shaba’s giants have all joined forces to get rid of the accursed Beards.  Even the peace lovers from Alec are ready to take arms and join the fight.  This war has been casting its terrible shadow over the gentle people of Mu.  Trouble is brewing and you, little suzerain, must prepare yourself for what is to come…

Human
Kos country stretches out among the fertile flatlands of God's Favor Plain and is home to the humans. Without the strong bodies and powerful mana skills of the races, they are considered to be a relatively weak class, but their wisdom and intelligence are often overlooked, and is the principle reason they have come to dominate the plains. They were also the first races to unite and fight together and the first to create mechanical weapons.

Shaba
With their tall, strong bodies, it is easy to write them off as mere labor or warriors. In fact these people have a long history and a culture that prizes bravery and glory in battle. When the Bilde attacked Alec and started the war that has consumed the continent, the Shaba mobilized their fearsome warriors and began preparing for war.

Alec
The people of Alec broke away from the Shaba tribe centuries ago and have since grown into a strong community that prizes magical knowledge above physical strength. Much more peaceful than the Shaba, they have absorbed the curiosity and wisdom of the humans and used it to enhance their mana skills. Sensing possible weakness, the Bilde attacked the Alec first, hoping to wipe them out before confronting the Shaba. However the Bilde underestimated the power of the Mages in Alec, and what was supposed to be a prelude to war has devolved into the bloody front lines of an enduring conflict.