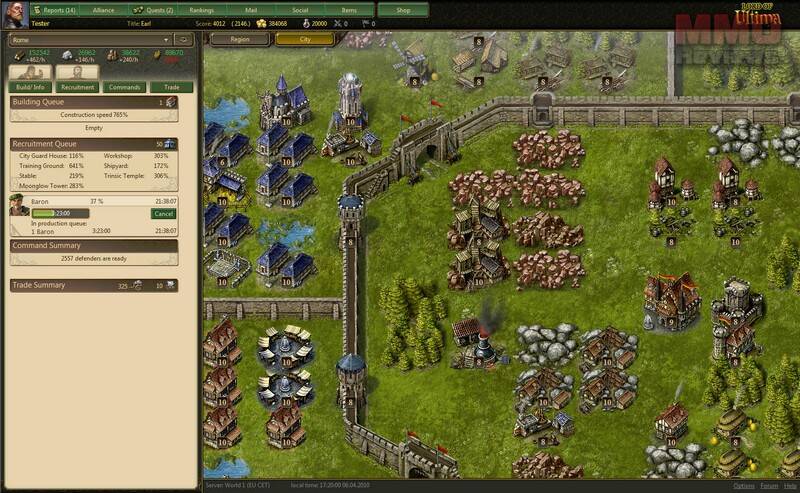 Lord of Ultima is a 2D free to play isometric strategy browser-based MMO game similar to the Settlers series which takes you to the new world of Caledonia, formed from the remains of Sosaria which was shattered into countless islands. You start your journey with a humble village which you grow over time into a mighty and prosperous capital. On your path to glory you will have to expand your power by creating additional cities, exploring new continents and forging a vast empire.

Lord of Ultima is a new part of the Ultima universe. The new land in which Lord of Ultima exists is set in a time after Sosaria had been destroyed and a new land has arisen: Caledonia.

You must master the art of diplomacy and trade as well as the military activities of spying, plundering, attacking and sieging enemy cities to finally become the mighty and feared Lord of Ultima. It highlights deep strategic gameplay and multiple social features including an advanced trading system, alliance features, online chat, and forums.

Building types
You can customize your city in ways never seen before in this genre. Choose among 27 building types. Place and combine them strategically to maximize their effectiveness.

Quests
A quest book full of interesting missions will guide you through exploring all the strategic possibilities Lord of Ultima has for you.

Own path
Prosper as a peaceful merchant by trading resources over land or by sea and using diplomacy. Or become a feared conqueror, by creating mighty armies of knights and mages to crush your enemies.

Alliances
Forging alliances with other players will help you in your ultimate quest.

Graphics and level of detail
Lord of Ultima is the best looking game in its genre. Cities offer unseen level of detail and are packed with numerous animations. For comfortable navigation, players can zoom into their city as well as explore the lands of Caledonia in the region view.

Beloved Sosaria, shattered into countless islands and torn from its place in time, is gone. I mourn its passing, but even now turn my thoughts to the future. Upon a vast ocean rises a new world, Caledonia. None can deny it is a fractured shadow of what once was, but I say glory still flickers in the ashes of the past.

It is said that only one possessed of strength and wisdom in equal measure can forge a new world free of darkness and fear. Such a task, though mightily daunting, would reap untold glory and riches.

Scout
Uses Scouts to attempt to gather information on another city. Anyone can be Scouted, including non-castled cities, but you must have a castle to do the Scouting.

Plunder
Plundering is used to loot resources from other cities. Anyone can be Plundered, including non-castled cities, but you must have a castle to do the Plundering. In a plunder, the defender will suffer limited casualties.

Assault
An Assault is a single attack that focuses on dealing damage to a city and its units. The attacking force is sent out once, attacks the target city, and any surviving units return home. Only cities with a castle can Assault and be Assaulted.

Siege
A Siege is a prolonged series of attacks on a city. The troops you send out will continue to attack the city in hourly waves until destroyed or recalled. Each wave deals 1/5 of the damage an assault would deal both to the attacker and the defender. Only cities with a castle can Siege and be Sieged. Sieging is also the command that allows you to take over a castled city when you have a Baron in the attacking force. In order to conquer any city, one must add a Baron to the sieging force. This also applies to castled Lawless Cities.

Support
Send troops to help defend another city. Their numbers will be counted as defensive units in the defending city. Troops can be recalled by their owner or sent back by the city they were sent to. Supporting troops cannot be controlled by the defended city except to send them back. It does not require a castle.

Raid
Raiding can only be performed on the dungeons and bosses scattered around the world and it is strictly Player vs. Environment (PvE). When raiding you come across all kinds of creatures and can grab yourself some easy loot. It does not require a castle.

When a player becomes inactive, his city will start to decline, and will be open to conquering. If the player was ranked early or higher, his cities will go lawless four weeks after the last login. For a player ranked baron or lower, the time period is only two weeks. Cities also go lawless immediately once they are abandoned or if the player chooses to restart.

You can send a baron to settle a lawless city, which cost the same resources as creating a new city (100k wood, 100k stone, 25k iron and 25k food), but you get the buildings already built. Noncastled lawless cities do not require an army to be sent with the baron, but castled lawless cities can only be taken by a baron and army sent from a castled city.

If a baron arrives at a lawless city that was settled after he left his home city but before arriving at the lawless city, he will return to his home city with the 250k resources. If this happens, be prepared to have sufficient storage capacity available or you will lose excess resources.

Players can only attack other players from cities that have a castle. However, building a castle means that your castled city can also be attacked or even taken over and lost to another player. Castling your first city before you have more cities is nearly always a bad idea.

The Minister can be hired against payment of diamonds for a period of time. They allow an extension of certain queues (construction and recruitment) and automation of certain processes. Ministers can be hired either for 7 days or for 28 days. Moreover, it is possible to hire all ministers as bundle, and get a little price advantage.

Diamonds are the virtual currency used in Lord of Ultima. They can be used to get special items that will enhance your Lord of Ultima game experience. You can purchase Diamonds by clicking the “Store” tab in-game and then clicking on “Get Diamonds.”