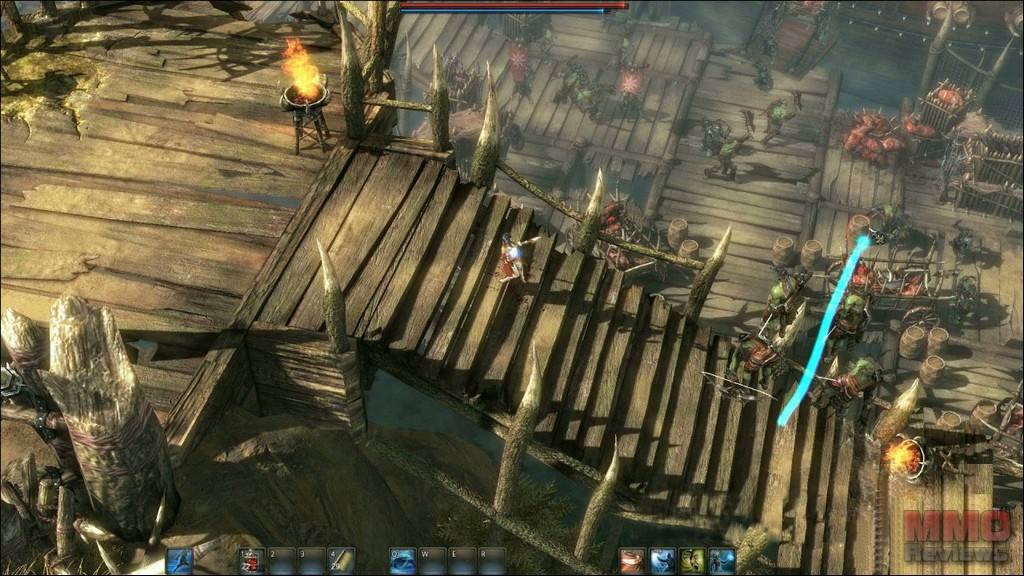 Lineage Eternal is the next in the series of the popular franchise of online MMORPGs that take you to the fantasy lands of Aden, evil hordes arise and dark creatures clamour for power and the world cries out for heroes.

In the game players will experience heroic cinematic combat that throws them into the midst of battle in epic action-based fights against waves of enemies that you will cut down in bloody and devastating attacks. You are the commanders on the battlefield, the heroes that the bards sing about, charging into the fray, scaling towers and city walls during cinematic sieges as catapults destroy the differences in front of your very eyes; the game looks like a cinematic but you control every part of it.

Players are able to choose from three different classes:

Knight: armed with heavy armour and powerful weapons the night is a chivalrous warrior able to charge at his enemy with devastating attacks and powerful whirlwind manoeuvres to kill the enemies that flock to him. An aggressive combatant he also has the ability to play strategically taking on a defensive stance that can repel and archers’ arrows as they clash against his shield or using his grappling hook to drive opponents over to him or use it for climbing and leaping across perilous falls.

Mage: student from the ivory tower, a once notable place of learning but now corrupted by the foul Dark Emperor, mage now uses her powers to fight him and his minions. Able to switch between different stances such as a Destruction Stance to summon the elements creating walls of ice and fire or a Displacement Stance to manipulate and move enemies with her telekinetic abilities, lifting them high up in the air and throwing them from walls and cliffs to their deaths.

Spirit Archer: descending from the forest folk they have mastered the bow and have the ability to summon from the spirits that will give them aid in combat. Spirit Archers use ammo to launch their attacks and so must track how many arrows they have available should be run out and be unable to perform any attacks. Their summoned spirits can buff them and give elemental effects to their weapons as well as turning into a physical form to directly fight against attacking enemies.

One of the key features of the game is the drag skills that enable players to perform various directional-based attacks using a mouse gesture system instead of using the typical attacks depending on which direction your hero is facing or targeting reticules often employed in MMORPGs.

With this system and Knight may power up the charge attack and then with the drag in a chosen direction of the mouse he will charge into his enemies following that line, or if the player draws a quick circle around the character they will perform a stunning whirlwind strike that attacks nearby enemies. The mage has the ability to summon walls of ice and fire, drawing lines in rapid succession mean she can quickly summon them in any shape and direction the player chooses, blocking the path of surrounding herself to make it hard for enemies to reach. With her deathly touch spell she summons a plague touched aoe under the cursor and wherever the cursor moves and touches enemies they are instantly killed.

FIGHTING AS A GROUP

Each hero has stunning unique abilities to hold their own in battle, but to take on more difficult quests and challenges players will be required to work as a team and former group. When players grouped together the open up more options for their hero, many of their abilities are better suited for group based play such as a mages paralyze ability, which can freeze multiple enemies in place but requires the mage to continue casting it and concentrating weaving her vulnerable to attacks, but in a group these frozen enemies can be attacked by the other heroes who can also defend the mage. Similarly the Spirit Archer has the ability to place his summoned spirits upon his allies and give them temporary benefits.

INTERACT WITH THE ENVIRONMENT

All across the battlefield in various dungeons and environments players will be able to interact with items, from raising drawbridges by pulling a lever, shooting powdered kegs to set off explosions or simply scaling the environments by climbing up walls. More advanced items directly interacts with your enemies such as lighting an unlit brazier in a dungeon to dispel the wraiths that are following you who fear the light to using a similar fiery brazier to throw on an enemy’s tent in their camp, setting the tent on fire and those that reside within who will emerge already set on fire and already taking damage.