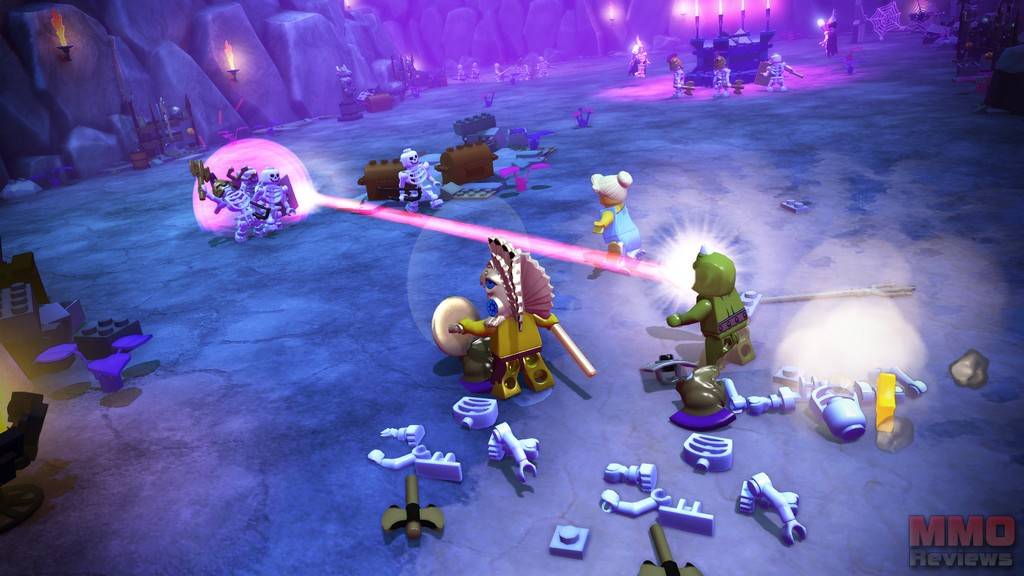 Lego Minifigures Online is a free-to-play MMO that can be played through internet browsers on Android, iOS and PC systems. Players will enter a fantastic and thrilling LEGO universe comprised of different persistent worlds where they can explore old and new locations, e.g. a pirate world, a medieval world or a space world. They will be able to meet their favourite LEGO characters, learn new abilities and skills, battle fierce monsters and bosses and enjoy the game together with lots of other players.

An unknown person only referred to as "The Stranger" has captured Minifigures from all LEGO worlds and people are desperately waiting for someone capable of finding and bringing them back. Give proof that you are the one they are longing for and set off to an epic adventure during which you will travel the different worlds, encounter a variety of foes and make loads of new friends to hunt down the evil kidnapper together.

The game features nearly 100 LEGO Minifigures that players have to look for to add them to their collection and take on their role when adventuring throughout the game. Collectors may find digital recreations of their favourite physical Minifigures, such as the Judge, the Chicken Suit Guy, the Roller derby Girl and many others.

When purchasing collectable physical LEGO Minifigures, players are immediately granted access to their in- game equivalents to take them on adventurous journeys throughout thrilling worlds.

Players are able to unlock special abilities for all their Minifigures, which enables them to attack their opponents with the sharp edge of the Aztec Warrior’s staff or use the DJ’s beats to send music notes flying across the battlefield to defeat their enemies.

There are dozens of LEGO worlds waiting for players to explore while travelling, each one individually designed according to their specific theme and with their own inhabitants residing there. You will come across swashbuckling pirates at the coastal lines of Pirate World and journey across Martian World where courageous galaxy patrols fight the mind-controlling Brain Beasts of Pluuvia.

You will accept thrilling quests throughout the game’s epic storyline that will send you into the medieval world to rescue a captured king where you have to fight fierce dragons and to hunt down Crickey the kraken in search for treasures in the pirate world. Even the powerful god Zeus himself will send you on a quest in the mythology world.

The in-game worlds are filled with entirely destroyable elements players are able to smash to pieces in order to get access to hidden places. They can rebuild and adjust them to their own needs or even use them to craft weapons to face evil bosses. The Builder Minifigures allows players to discover piles of bricks to produce helpful things for themselves and their team-mates, e.g. bridges, turrets or gyrocopters.

Players can look for treasure chests and other crates and smash them to gather stars which can be used to make their Minifigures even more powerful by enhancing their skills through training.

While the LEGO world can be explored solo, players will have much more fun when adventuring together with their friends. Challenges and quests can also be completed in coop gameplay and thrilling player versus player modes encourage to face each other in friendly combat.