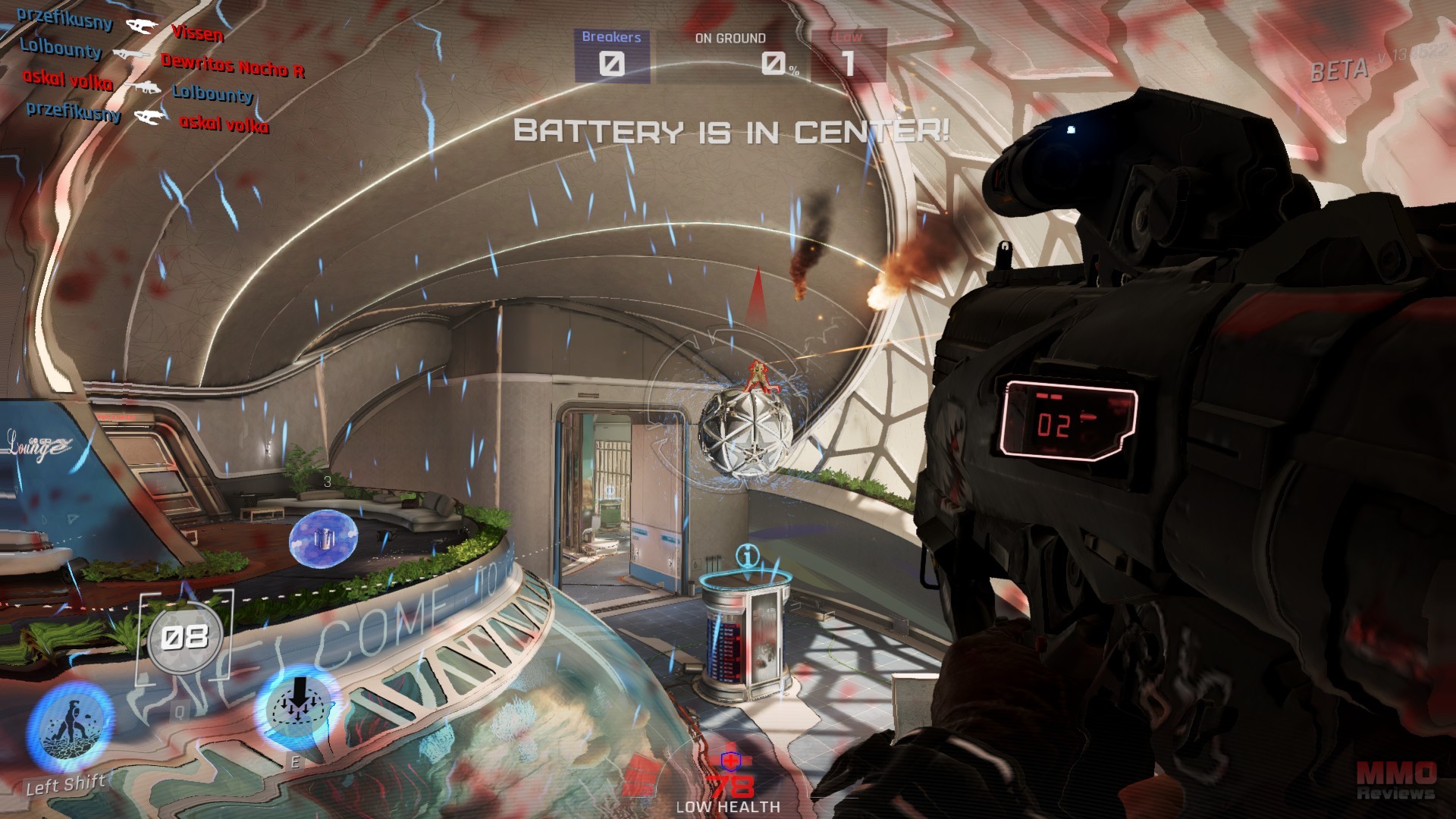 LawBreakers is an action packed first person shooter set in the future where a literal world breaking event known as the Shattering has changed the face of the globe forever and twists gravity on Earth leading to some epic gravity defying abilities and movement in this adrenaline fuelled shooter.

The core concept of the game is a traditional 5 v 5 team based fps with objective based matches, forcing players to work together whilst going up against the enemy. With a range of characters with different arsenals of weapons and abilities teams battle across a variety of maps encompassing open areas and enclosed corridor battles and even fighting in low-gravity where with the use of rocket packs and skills players can move 360 degrees around the map in full vertical combat. Between deaths players are able to switch between the different characters that are available to their randomly assigned faction for the battle; Law or Breakers.

In the game players can choose from six key roles between the available "Law" and "Breakers" factions, that give diverse play styles as well as unique abilities between fourteen different characters. Such as:

Enforcer - These soldiers are your run and gun combatants able to dominate opponents using their Badger shock pistol and Aerator assault rifles; with a variety of skills such as being able to speed time up for themselves and teammates with a Distortion Field, or unleash a pack of Bloodhound rockets onto enemies

Assassin - One of the most deadly combatants on the battlefield using an energy based close quarters Romerus shotgun and deadly blades, they have high mobility and are able to swing around the map using their energy based grapple line bring death from above or any other direction

Titan - A brute force fighter they make mincemeat of those that get in their way, equipped with devastating Hammerhead rocket launchers, and frazzling chain-lightning guns they leap around the battle pulverizing unsuspecting enemies. With a full berserker rage mode that builds up through the battle they can unleash an electric charge that fries everyone in their path

Vanguard - Equipped with a flight suit the Vanguard soars through the sky and unleashes a barrage of bullets from on high with their Hydra minigun and cluster grenades, or uses a superheated Pulsar blast to disintegrate opponents. A powerful mid-range skirmisher they exercise control on the map and can hunt down opponents, assist their allies and get into battle quickly

Juggernaut - Armed with a powerful shotgun and blade to eviscerate their enemies, the Juggernaut excels at helping their teammates move into an area, covering flanks and rear with their Holoshield, or providing some cover against an ambush

Battle Medic - Able to dart around the map with their rocket pack and heal up comrades with a short range heal, they switch between a repeating pistol and their main long range grenade launcher to bring a bit of death as well as life

Turf Wars - A point capture battle where three points around the map become active in different orders and players must fight over taking control of them by holding and defending a point for a set amount of time before it is claimed and then locked; a team must capture 13 points through the course of a game to win

Overcharge - Battle over a single battery that spawns and players must carry to their home base to charge a gauge to 100%; if a player is killed whilst carrying the battery it drops to the floor for the enemy team or an ally to recover

Across the map players will find pockets of low-grav where their abilities and tech allow them to dart through the air performing aerial feats and fighting against their enemies, adding a fully vertical dimension to combat and a high level of tactics and skill to the game.