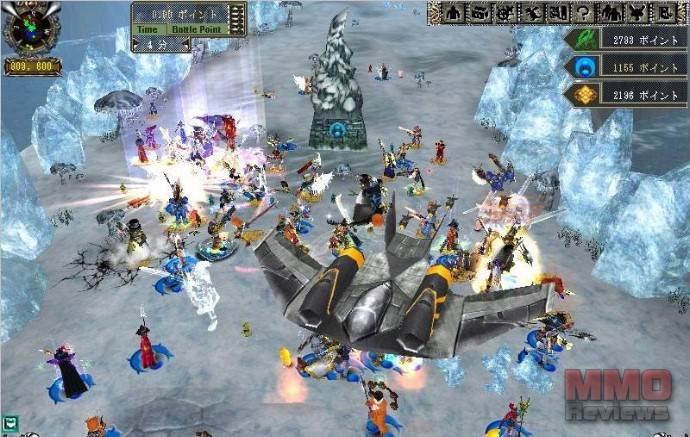 Laghaim is a free to play MMORPG, formerly as Savage Eden in the United States and BiosFear in Europe. Its set in a 3d virtual world full of monsters, quest and maps to explore.

- A complex pet system that allows players to raise their own special breed of monster in order to help fight those pesky monsters all over the world of Laghaim.
- A feudal system that allows players to gather in guilds, which can then build and defend castles or defeat enemy castles, and provide significant rewards.
- A world filled with brute force, magical talent, extensive character development, trading, alliances, guild wars and huge maps to explore and conquer.
- Various styles of weaponry; ranging from guns to swords to magic, giving everyone the freedom of choice when customizing their playing style.
- Personal androids that must be cultivated to enable player assistance, power-ups, and aid when completing quests.
- Expansive gaming world that can support millions of players.
- An ever-changing gaming environment system that follows the patterns of daytime and night time (changing the sky in accordance with time zone) and dynamic textures are included.
- A range of unique emotions that are expressable in game, complete with sound.
- Dynamic gaming environment complete with oceans (which you can swim across) and mountains that can be climbed.

In the winter of 2357, planet Earth was bereft of life. Mankind had to find a new planet to survive. They found New Earth, a planet with similar atmospheric conditions to earth, but located millions of miles away.
When the mission to New Earth was ready, 500,000 people were selected to travel on the Salvation Spaceship, leaving behind the sorry polluted shell of the original Earth.

During the seven-year long space journey to New Earth, 330,000 people perished. When the last 170,000 survivors landed on New Earth a dangerous menace was waiting for them. Hostile races living on New Earth were waging a war. The human survivors had to face the Bulkan, Kailipton and Aidia race in ferocious battles. The planet was too small for these races to coexist. Diplomacy was not an option.

Bulkan
Bulkan follow the traditional image of the melee character. High physical resistance, heavy swords and axes and efficient armor contribute to their role of the perfect warrior. The Bulkan are excellent in close combat and can crush numerous enemies with their high attack power. Although they cannot serve with special properties in the cultural trading between nations, they are nevertheless essential. They form the front line against the threats on Laghaim.

Human
Ranged attacks using guns and heavy weapons. This race focuses mainly on guns as the primary weapon. Attack and defence are reasonably balanced allowing for well-oriented game play. Processing and collecting gems can also produce some of the equipment. This race focuses on constitution, strength and agility. Humans can make different things and adapt well to different environments.

Kailipton
Kailipton are full-blooded wizards, who know how to use magic in all its myriad forms to attack their enemies. As with all classic long distance races, Kailipton characters have weak defense and low physical resistance; enemies need to be defeated quickly and with enormous magical power. With their magic they are able to keep enemies at bay, or prevent outright a superior force of enemies from attacking.

Aidia
The Aidia are at both an advantage and a disadvantage not only because of their size and stature as a melee character, but because their capabilities are designed for distance combat. They have the ability to summon creatures that are loyal to them as a melee to the side and allow the Aidian to attack from afar.

Hybrid
Hybrids are a dual-wielding class using various strategies. Also has high chance for critical hits. The weapons used are selected from dual swords and a hammer. Dual-wielding induces an attack penalty but has a chance in PvP to issue devastating damage very quickly.

Quests in Laghaim are set tasks that, when completed, reward players with either experience, items, Lime, or all. There are 3 types of quests available and each has to be done differently and are some of the most effective ways to get level ups, Lime, or items. A Mission Machine is necessary to start a quest. Players up to level 99 can buy a Mission Machine from the NPC traders. Players above these levels can purchase Extended Mission Machines from other players in game.

Scroll Quests
- Kill the amount of each monster specified in order to obtain a special scroll
- Take this scroll to the necessary NPC in town to cash it in and receive Lime and/or exp
It is important to note:
- The scrolls are from the exploration of N'Agen; N'Agen wrote down secrets on scrolls and protected them from destruction throughout time.

The Cash Shop offers a wide range of potions and power-ups that enable you to upgrade your gaming experience.