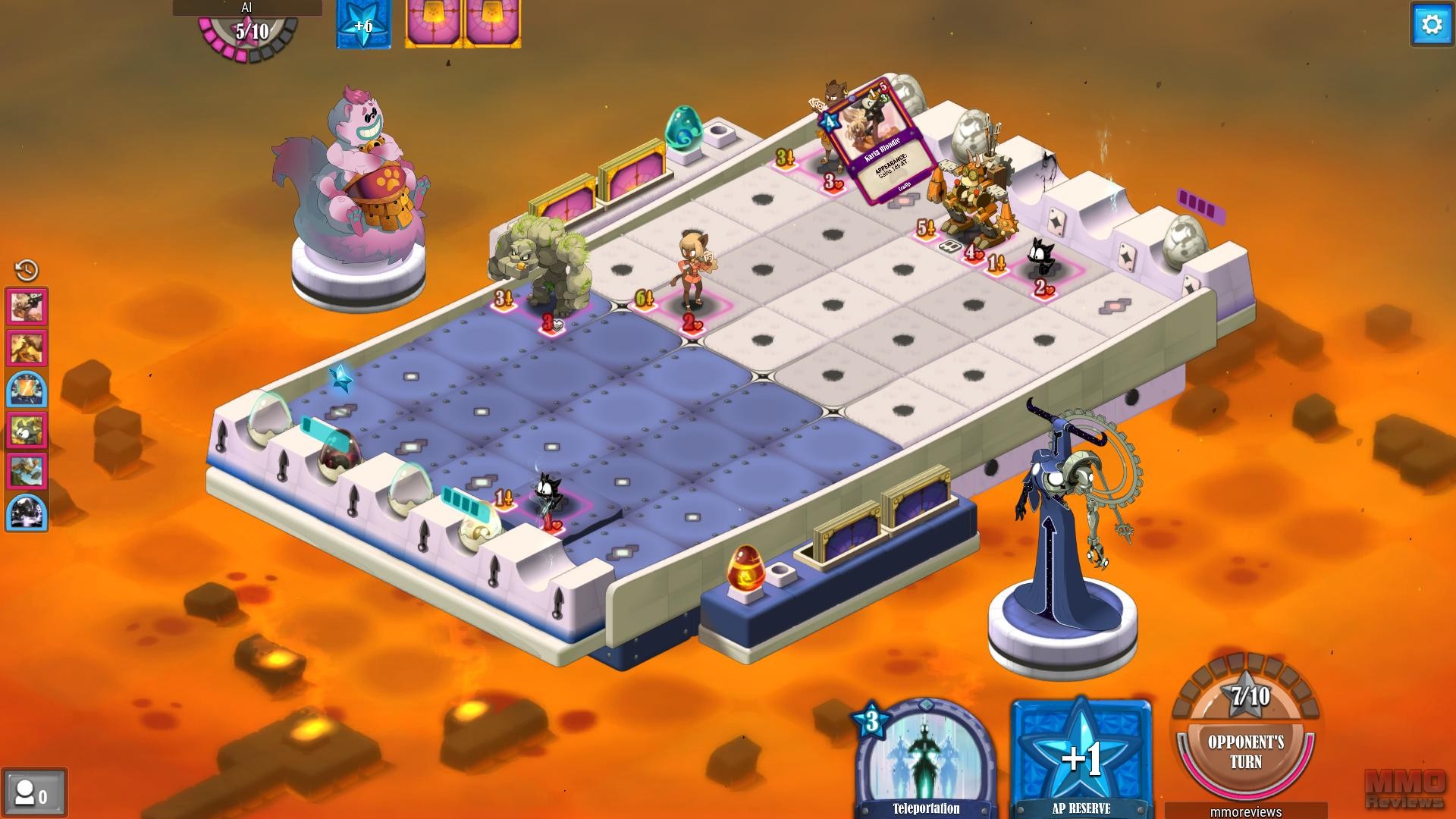 Return to the Krosmos and take the role of one of the deities that resides over the realms of Dofus and Wakfu, worlds popularized by their comics, anime and respective MMOs; Krosmaga is a card collecting game that sees famous faces and creatures from the franchise brought together to do battle at the whim of the gods they serve. Collect cards, battle in one on one duels, work your way up the rank ladder and learn to master the servants of your chosen God and their strategies in this free to play MMO.

At its core Krosmaga is a card collecting game where players must build their own decks of cards to head into battle which then converts into a tiled chess style board game, playing cards and placing units onto a game board where they will battle each other or using powerful spells to hinder and harm these units. The goal is to try and get units across the board to reach the enemies Dofus eggs and destroy them.

The game currently has 8 unique gods that have cards that are exclusive to them, which determines the types of strategy and playstyle a player can expect from their chosen god:

Ecaflip – The God of Luck loves to create chaos and unpredictability in battle, whether summoning units that will roll a dice to determine their attack scores (creating some extremely powerful or extremely weak units), or drawing a Heads or Tails card that could give either himself or his opponent a benefit.

Iop – The god of Bravery and War this god charges into battle and hits first, thinks later, focusing on empowering units with Charge abilities so they can instantly get into battle, or their units being able to attack their enemy first; he focuses on strength to overpower his opponent

Each God deck has unique cards, as well as a pool of neutral cards available to all Gods, these cards are split into Summon cards or Spell cards. Cards are played by spending accumulated Action Points, each card having an AP cost based on how powerful that card is; the players AP pool fills back up each turn and increases its total AP amount by 1, meaning later in the game with more AP players can play more cards in a turn or even play more high AP cost/powerful cards:

Summon Cards – When played a Summon card is placed onto the battlefield, typically taking position on the first square of one of the five lanes that make up the board, Summons start on their side of the board and will automatically move at the end of each turn and attack any enemy Summons they come in contact with or the enemy Dofus’ if they reach them. Summons have an Attack score to determine how much damage they can do, Hitpoints which are reduced each time they take damage (removing the unit when they have lost all their hitpoints) and Move Points to show how far they can move each turn. Many of the Summons also come with a trait to give them some extra functionality in the match, such as increasing their Hitpoints each turn, or healing other units, summoning extra creatures and more.

Spell Cards – These cards are cast directly from the players hand and can offer a variety of utility from healing their played Summons, dealing direct attacks to enemy Summons or Dofus, repositioning Summons on the battlefield and more.

New cards are generally earned by acquiring in game currency and purchasing Booster Packs, these packs give randomly generated cards that can be for any God and are managed into the player’s deck using a Deck Builder; players can also purchase these Booster Packs with microtransactions using real money.