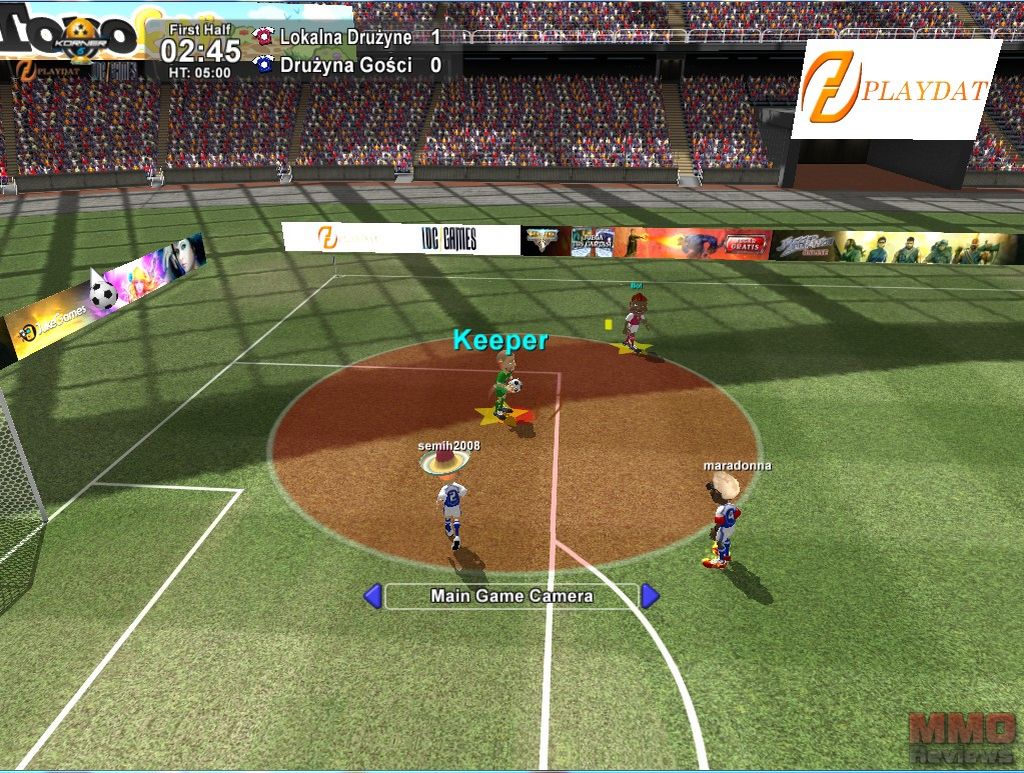 Korner 5 lets players live out their dreams of becoming an accomplished professional football player, this simple yet extremely addictive skill based MMO starts players out as new footballers looking to make it big, each player controlling their own character. With elements of appearance and skill customization, action gameplay and the ability to build your own team, this free to play game is fun for players of all ages.

The core premise of Korner 5 is players taking on the role of a football player, responsible for playing games and earning in game currency to pay for their training and level up ranks in specific skills/stats, such as speed, dribbling speed, stamina, etc that will make controlling them on the pitch a lot easier. The game does focus on player skill with players moving their character with mouse and keyboard controls, placing passes and shots and working solo or with teammates to increase their rank.

One of the best things about the game is the simplicity of the controls, they are extremely easy to learn but with experience can be mastered so that players can still separate themselves from the rest and be known for their skill. When starting the game, players can do the training tutorial to learn the basics of the controls before playing against other players.

Moving – Basic movement consists of the WASD keys to move your character around and using the mouse to change the angle of the camera and thereby the direction the character is facing, mastering movement will allow players to chase down opponents in possession of the ball, quickly get into position with their teammates to receive a pass, or dribble the ball to get a shot on goal! Players are also able to use the sprint action [Spacebar] to give them a speed burst, that lasts as long as their stamina bar and will replenish slowly over time.

Aiming a Shot/Pass – Whilst the mouse controls the camera it also controls the direction a player will pass or shoot; when they have the ball a white ring appears on the floor that can be moved around with the mouse and the player is able to pass to that ring, either centering it near a player or passing it into space for a player to run onto. If a player finds themselves near the goal and in shooting distance, the white circle turns into a shoot target when they hover the mouse over the goal mouth, able to aim their shot with precision.

Passing and Shooting – Kicking the ball in general uses the same left mouse button, by holding it down briefly the power gauge will charge and then kick the ball when released, for a pass the bar is split into three sections, if ending the charge the lowest section players will do a light pass along the floor, the middle section a chip to a players chest and the top section will do a high chip to the target players head. When shooting the gauge simply represents how powerful the kick is, but if the player doesn’t let go of the mouse quickly enough then they will mess up the kick.

Tackling – Keeping hold of the middle mouse button when near a player in possession of the ball will attempt to tackle them, the ball always stays fixed at the players feet and your skills in tackling may determine how easy it is to pull the ball off them. Players can attempt a sliding tackle by tapping the middle mouse button, but if badly time the player may foul the opponent and get a yellow or a red card, which temporarily debuffs them and slows them down

Players will most commonly play in 1 on 1 matches against a solo player (with each having an AI goalkeeper), solo games allow players to rank up their individual score on the leaderboard. Alternatively players may create or join a team, with their own kit colours, team name and player roster teams can compete against other in multiple player Team Games and work on increasing their Team Rank.