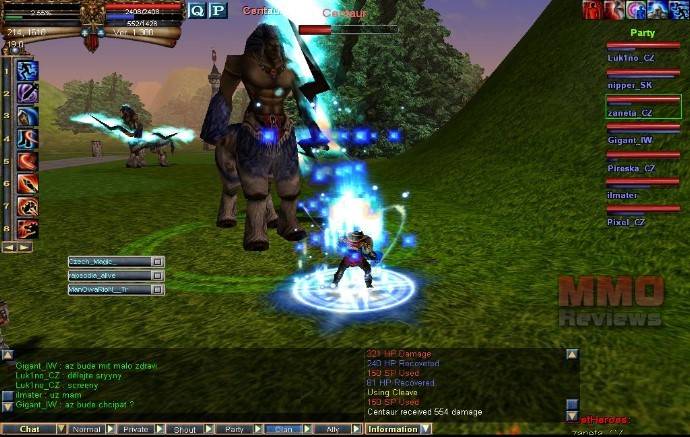 Developed by MGame Corp. for Windows.

With over 10 million people logging on to play from around the world, Knight Online represents one of the biggest MMO communities that are around. Some of the most exciting features of Knight Online are the most involving, persistent and large-scale wars between players, and its own built in party system.

Knight Online is officially free-to-play (although to connect to the utmost of the servers paid premium is required), but there are some features that must be paid for. In addition, there is an in-game Powerup Shop or Store which contains various items that one can purchase such as premium packages.

- Heart pumping PvP in a Fantasy MMORPG.
- Choose a side in the epic conflict between El Morad and Karus.
- You decide between a sorcery wielding mage, a stoic priest, bone-crushing warrior o shadowy rogue.
- Fight in bi-weekly wars and castle sieges.
- Earn the chance to be king and achieve power and respect.
- Fight in a permanent PvP environment.

Knight Online allows players to fight against each other in various zones. Some of these provide no rewards or risks, while in others players gain National Points and Leader Points (also called Ladder Points) for killing enemies, but the defeated player loses some of these points.

The game has the following PvP areas:

The Rebirth System gives players a new upgrading option when it comes to armor and weapons. This system of upgrading allows better probabilities when upgrading.

Operating System: Windows 98/2000/XP/ME
CPU: Celeron 300 or above
Memory: 128 MB or above
Hard Disk Space: 400MB or above
Video Card: 16MB or aboveDirectX support 32MB or above 3D Display Cards with DirectX support
Additional Software: DirectX 8.1 or Above