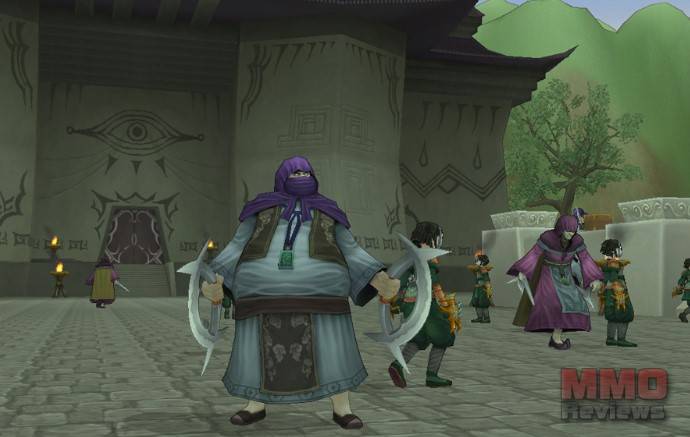 Developed by X-Legend Entertainment for Windows.

When the world was still young and new, the inhabitants of the realm lived in peace and harmony. The guardian spirits looked upon this and felt their creations complete and whole. Without another glance they departed, believing it safe from harm. But the Holy Nine Tailed spirit was doubtful. She understood the weaknesses of man and knew one day that the world would fall into chaos. Determined to do everything in her power to prevent this, she sacrificed the last of her powers and created spirits that would coexist with the elements of the world.

As her consciousness began to fade, the Kitsu came forth. Small fox-like creatures, they entered the world in quiet and began their vigil. They were silent creatures, ever present yet never seen. Time passed, and though the Kitsu were long-lived, many began to notice their powers beginning to fade and their place in the world starting to crumble.

In Kitsu Saga, you can raise little fox spirits called the Kitsu. These guys help you in battle, pick up your loot, as well as take care of all your crafting and farming. You can warp to your personal Kitsu Cottage where you can interact with your Kitsu and watch them as they work.

Travel kitsu
Your travel Kitsu will give you combat buffs, pick up your loot for you, and gain aura for upgrading later. To take a Kitsu with you, just right click on the Kitsu's tablet from your inventory while no other window is open.

Cottage kitsu
Your Cottage Kitsu will farm for materials and do all of your crafting. You can issue commands and retrieve crafting items at anytime by bringing up the Kitsu Farm window. Every Kitsu has different Farming and Crafting Skills, an every Kitsu will give you a different passive buff if you choose to take it out with you. Select your Kitsu Wisely.

In Kitsu Saga, you can duel players as well as meet on one of the Battlefields to duke it out. The game records every battle, and rewards the top players every month.

Every MMO may have guilds, but in Kitsu Saga you can unlock special quests and dungeons, Upgrade your private guild hall, and even post up ads to recruit new members.

You can't tell from the screenshots, but you will learn very quickly how fast paced the combat in Kitsu Saga really is. Feel like a mighty warrior as you battle multiple enemies at once.

To keep up with the combat in Kitsu Saga, you will need to master your chi! Some spells give you Chi, while others spend it.

Keep record of your trophies. Half the fun of an MMO is tackling those punishing bosses and getting sweet loot! With Kitsu Saga's archive system, you can keep record of all your top kills and best items- which you can trade between your characters.