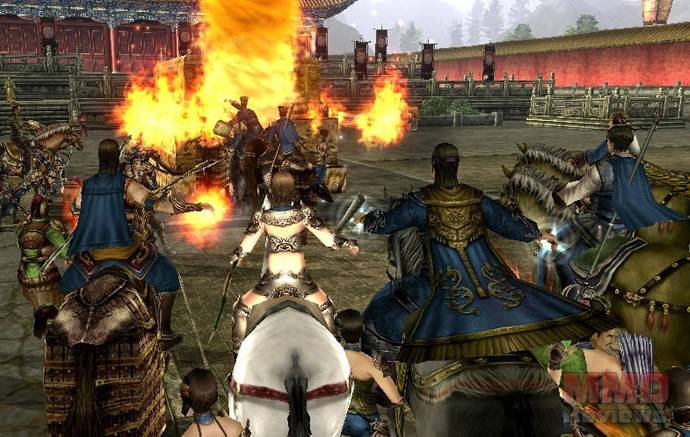 Developed by Userjoy Technology for Windows.

Kingdom Heroes is a massively multiplayer online role-playing game (MMORPG) set in the Three Kingdoms period of Ancient China. The title introduces a wide range of new and revolutionary features to the MMORPG genre. In KH, players are able to Recruit and customize NPC soldiers to form their own personal armies. Organize a crew of players and take to the seas in exciting ship battles. Work together to establish, develop, and defend player-controlled cities. And conquer enemy strongholds using an impressive arsenal of troops, mounts, ships, and powerful siege engines.

Wei
Founded when Cao Cao unified the north of China.

Shu
Located in southwest China, the Shu dynasty was founded by Liu Bei.

Wu
The last of the three kingoms to be formed, Wu is located in the south of Chin and was founded by Sun Quan.

Choose one of three factions and participate, if you desire, in a recurring, full-scale, player vs. player (PvP) battle for control of territory across the entire world map. NPC troops, mounts, ships, and siege engines.

Do you fancy yourself a brutal warlord or a savvy politician? Maybe both! Organize a group of players, capture a city, and administer it any way you see fit. Be wary – there are others who will look to wipe you off the map.

As you rise through the ranks of your faction, you earn the respect of your peers. Recruit and customize a variety of NPC soldiers, and build your own personal army. Individual EXP, formations, and specialties.

Organize your very own crew of players and take to the seas in exciting ship battles. Up to eleven players can collaborate aboard the same upgradeable vessel. Raid enemy ships, blockade cities, and more.