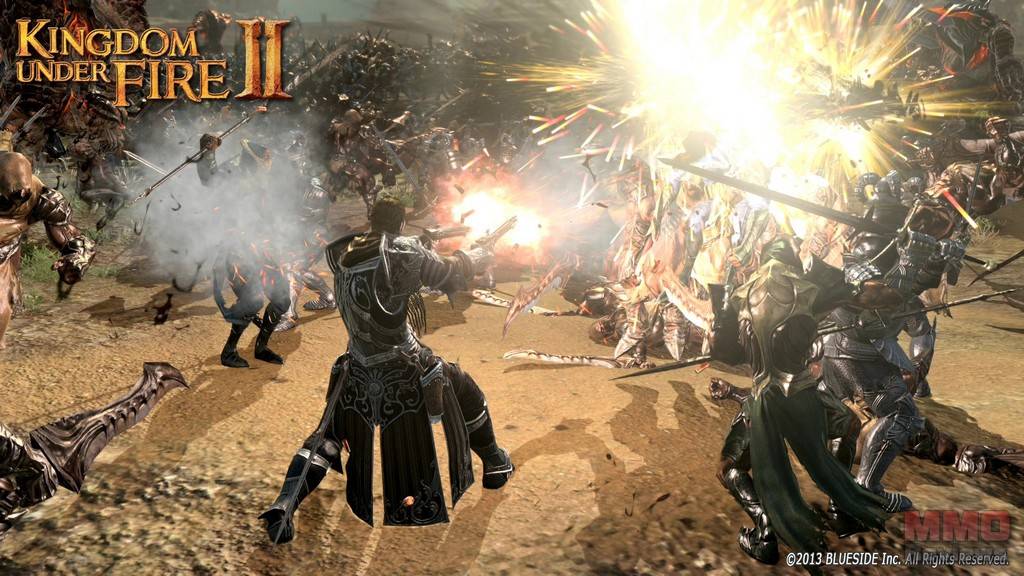 Kingdom Under Fire 2 is the free-to-play sequel to the popular RTS by the same name and has now combined MMO elements, real-time strategy and action RPG to create a new genre of game. In KUF2, players will control their own hero and lead him into battle as well is having command over their own trained army of soldiers for strategic combat.

As an unknown people calling themselves the Exile begins to appear on the continent of Bersia, brought forth from the dimensional cracks as created by the cataclysm, the strange beings are reportedly from another age. Once ruled over by the dark God Encablossian. Their reappearance has thrown the world into chaos once more as old alliances reform and the war to rule this stage begins.

The three primary factions fighting for control of Bursia are:

The Human Alliance - An old alliance now reformed of the Humans, Dwarves and High elves, where once the Human race were seen as the lesser nation; they have now risen in prominence and dominate this alliance with their Dwarfen and Elven counterparts, marching to the beat of the Humans’ drum.

Dark Legion - A ragtag Alliance formed more out of the need to survive that has banded together the Half Vampires, Dark Elves, Undead and Orcs, originally united by the legend Regnier who gained immortality from the Ancient Heart artefact. Such a legacy had he created that even in his death, the Dark Legion lives on.

Exile - A strange and foreign people from another dimension, escaping the Dark Age where they were under the rule of the deity Encablossa, they now seek to carve out their own life and reclaim the land that they once ruled in another age.

Players are able to completely customise their own characters with a number of detailed visual customisation options, everything from skin, hair, eye colour, scars and facial features as well as personalisation using armour, holding and other accessories.

There are a number of different classes available in the game, for example:

The Spellsword - Using both swords and sorcery, these magic casters are able to dominate their enemies with both their arcane skill and proficiency with a blade.

The Gunslinger - Equipped with their own modify rifle, they are powerful combatants on the battlefield able to destroy their opponents from a distance and then finish them off up close with a traditional sword.

The Berserker - Harnessing part of the Dark God himself, these heavy armoured fighters charge into battle with an enormous bastard sword and harness their own inner rage to deal powerful and terrifying damage.

Kingdom Under Fire 2 has two main styles of combat that players can enjoy; heroic combat allows players to control their own individual hero character during a battle where they can fight off thousands of enemies as they charge into the fray with their allies. Alternatively, a player can act as a general that commands over their troops and fight out the battle in an RTS style top-down conflict, using formations, tactics and managing their own army to choose from a wide selection of troops, everything from infantry, cavalry to huge monolithic juggernaut units that can crush man underfoot.

Players are able to join large guilds of players that work together and can engage in Guild versus Guild combat to not only prove that they are the best but also gain materials that allow them to manufacture unique items and troops, as well as occupying their own slice of territory. Fight in larger scale epic battles in the Faction War where multiple Guilds go head-to-head in huge bloody battles.