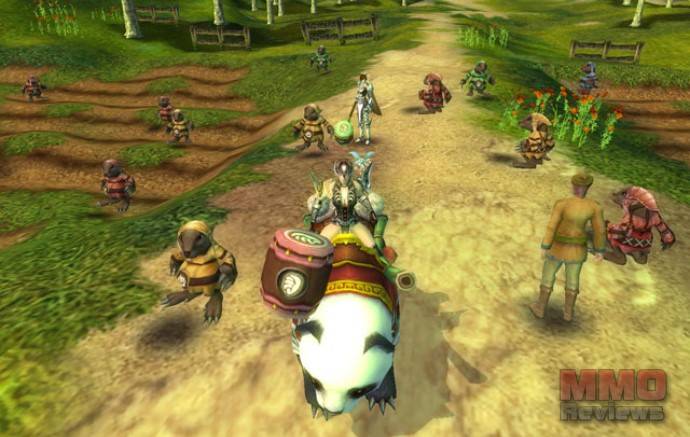 King of Kings 3 is a free-to-play 3D online role-playing game (MMORPG) which is built around battle between players. There are plenty of ways to engage in PvP - be it in duels, open PvP, strategic attacks on other kingdoms or epic battles in which entire realms battle against each other.
King of Kings 3 also offers the unique opportunity to create your own destiny: Build your own house, found cities, and prove your mettle in the grim reality of a war-torn world while working your way up the ranks from being an ordinary citizen to become the ruler of your own kingdom.

After centuries of continuous war, the once mighty world of Tangramia was torn into seven realms: Germania, Lutetia, Britannia, Mediterrania, Anatolia, Polonia and the New World. Each of the realms is protected by a patron god and its inhabitants fight amongst themselves for the limited resources available.

Multi-level, dynamic guild system
You start as a young lone warrior, but soon get the chance to band together with other to form an alliance. By rising to the daily challenges, your guild can thrive and prosper and be expanded to a legion. The stronger and larger your alliance grows, the more advantages and amenities it can offer its members. Once you have grown powerful enough and have learned to hold your own in battle, nothing can stand between you and the crown: become ruler of your own kingdom and secure your place in history.

Housing and town building
Discover your inner architect! Design your own home and build it up from a simple log house to a sprawling villa. Build a fortress for your legion and an impressive capital city for your kingdom, tailor-made and built up with a variety of functional and decorative buildings. Houses and towns can also level up and be improved to offer higher bonuses.

PvP with conquerable towns
Be it duels, spontaneous skirmishes, regularly-held events and battlegrounds or an all-out declaration of war on other kingdoms and attacks on their towns… King of Kings 3 has everything a PvP fan could wish for! Your efforts will also not go unnoticed: Look for your name at the top of the ranking lists. Collect titles that will bring not just fame and glory, but also increased buffs. Strengthen your kingdom and increase your fortune. Teach your enemies the true meaning of fear and prove that you are worthy of the title King of Kings!

Flexibility and depth
King of Kings doesn’t just offer a wealth of features, but also has a depth never seen before in a game of this type. The detailed and elaborate game elements form a complex and multi-faceted world that - unlike in most other RPGs - is not static but rather can be changed by the player’s choices.

Warrior (Basic class)
The warrior’s incredible strength allows him to easily carry the heaviest armour and the most powerful weapons. The warrior’s specialty lies in close combat - they wait anxiously on the frontlines to batter their enemies with mighty blows and to protect their allies with their shields.

Berserker
Offence is the best defence. The body of the berserker has been hardened by hundreds of battles, and when they return from the battlefield drenched in blood, you can be sure that most of that blood is the blood of their enemies. When the rush of battle takes them, they lose all fear and become the embodiment of death.

Ranger
These fighters, always searching for the truth, are masters of both the bow and the blade. They are firm believers in justice and making sacrifices for the weak and the helpless gives them the strength to face their enemies with hardened resolve.

Knight
Knights ride from battlefield to battlefield on their trusted warhorses, carrying their mighty lance and bow. From high up on their horses’ backs they can gore their enemies with their lance or with arrows. They fight against injustice and take on evil in all its many shapes.

Mage (Basic class)
Mages draw their strength from the never-ending search for the secrets of magic. Even though their bodies are weakened from years spent studying and although they are not permitted to wear metal armour, their mind is a dangerous weapon that should not be underestimated. As long as their allies are there to protect them, they can take down even the mightiest of warriors.

Sword Mage
How can a magic wand be made even more powerful? How can the power of magic best be harnessed? To find the answer to these questions, magic swords were crafted using special crystals. The masters of these swords, the sword mages, draw on the power of their weapons to be mighty warriors in battle.

Conjurer
Because the mind is the strongest of all weapons, conjurers are dedicated to exploring the depths of their mind. The more they learn, the more powerful their magic grows. From harnessing the power of nature to swallowing up other forces of energy, conjurers are fascinated by each new discovery, even though none seem to satisfy their thirst for knowledge.

Wizard
Their innate thirst for knowledge drives them to continually search for the deeper secrets of magic. To assuage this desire, they learned the art of exorcism. While the line between good and evil starts to blur, the only thing that matters for the wizard is the power that comes with this new knowledge.

Cleric (Basic class)
Their devout belief ensures the benevolence of the gods, who bless them and give them strength to spread the light and, with it, illuminate the dark and the evil. Clerics protect their companions by using the power of belief to heal wounds and fill their bodies with the strength of the gods. Their blessing makes the weight of the world seem a bit lighter. Although clerics do not wear heavy armour, their war hammers are very much a weapon to be feared.

Scholar
They are true believers, the clerics among clerics. Because of their utter devotion, the gods favour them above all others. This gives scholars incredible strength, especially in healing wounds. Their unparalleled skill at healing wounds includes the ability to beat death itself.

Bishop
In order to better serve the gods, bishops became the mediators between the wise men. While they gain their divine strength from this, they also learn much from their dealings with mages, which opens new opportunities for them. This helps to strengthen their defence as well as their attack, and yet they are not driven by a greed for power.

Priest
Their hearts and souls are solely dedicated to the gods. The incredible sacrifices they have made for the gods have earned them the trust and strength of the gods. This power allows them to discharge pure holy energy on their enemies, and if they send out a call for aid, angels often answer.

To actively participate in PvP, you can open your PvP licence once. After doing so, you can fight against other players in all the regions of Tangramia, except in special “Safe Zones“. These “Safe Zones” are located, for example, in towns or in certain retreat areas. Unlocking the PvP licence can NOT be undone.
While your PvP licence is locked, you can only: Attack players from enemy realms that have attacked your realm. Fight against other players in the PvP area in one of the towns. Be attacked by other players if you enter an enemy realm or one of the higher-level areas of your realm marked as a “Hazardous Area“.

If you’re not in the mood for a fight, you’ll find a bit of distraction playing one of the many minigames. From fishing to dancing, all the way to the ever-popular Whack-A-Mole and the challenging quiz, the possibilities are almost endless. As a reward you will receive special items, experience, and coins as well as glory in the entire world of Tangramia.

Take advantage of the many possibilities to collect materials to create powerful weapons and armour and even to build entire buildings that will help you on your adventures in King of Kings 3. You can use them for your own character or sell them to other players. Setting up a peddler stall in one of the towns to display your wares for sale for others to see is just one of the many ways to trade.