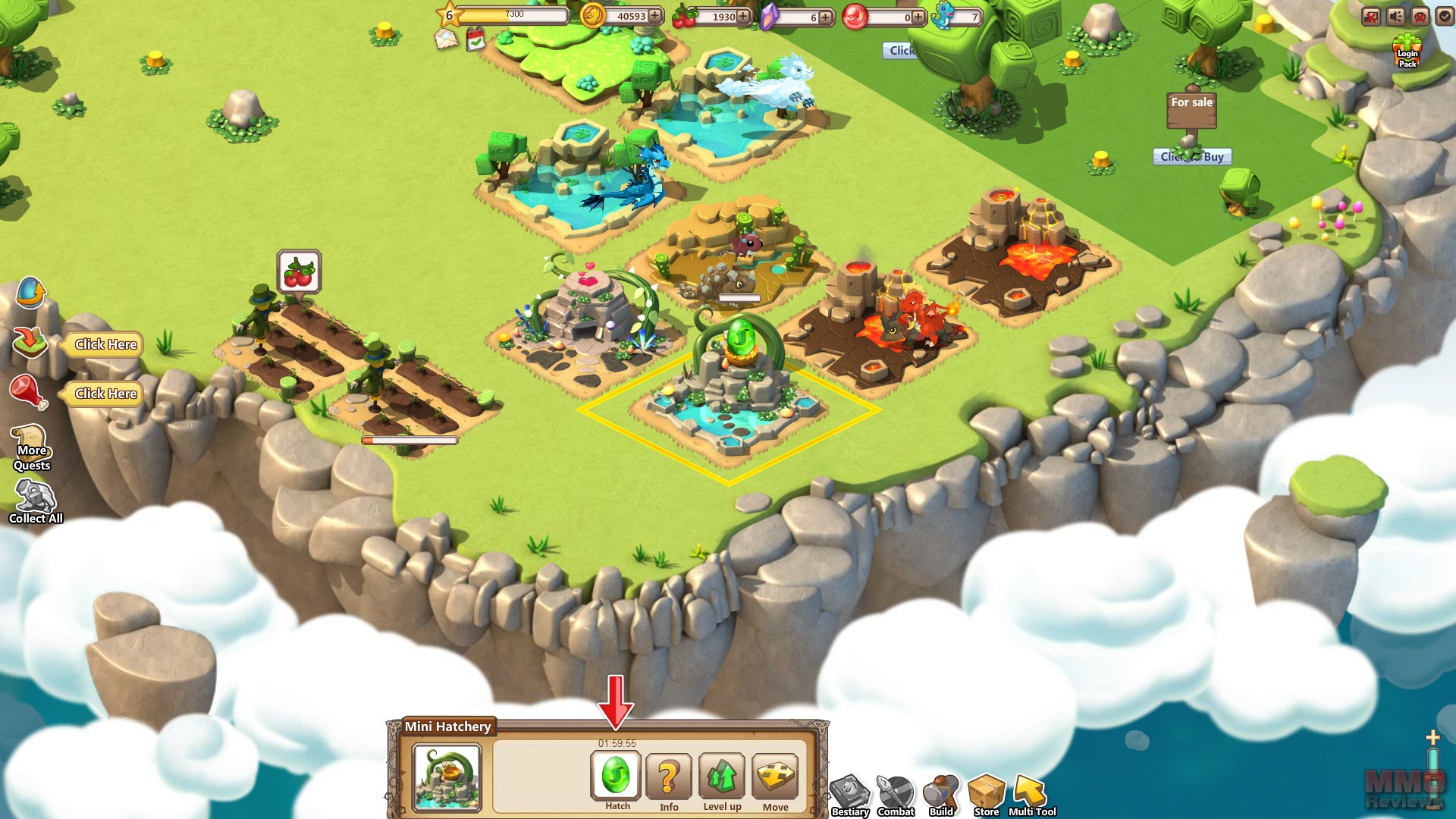 Kinderdragons offers players the chance to run their own island hatchery where they breed dragons and take care of them, then fight against other players in PVP with their pets, battling for rewards to improve their dragons. The game is playable through the Facebook platform and is free to play.

The primary gameplay revolves around trying to unlock new dragons and train them up; making a powerful team that can be used in PVP battles. Players have to manage not only their resources, the land that they can build on, but also their time as many tasks can take minutes and even hours to complete with tasks continuing when the players logs off.

When initially starting players have access to an island where they can construct a wide variety of buildings needed for the task of breeding and tending to their dragons. Buildings come in different shapes and sizes and will take up the available land, so players must expand their territory, clear out obstructions, and even unlock new islands with different environments.

There are a variety of buildings that players can construct, they take time to build and cost Gold currency to purchase, players will need a number of buildings to fully complete the process of breeding a dragon:

Incubator – Here players can select two of their dragons and breed them with each other, selecting different types of dragon can create new types; after a certain amount of time the dragons will lay an egg; only one pair of dragons can use an incubator at once

Hatchery – New eggs must be placed in the hatchery giving them time to hatch, only one egg can be hatched here at any one time; if players do not have dragons to breed then they can purchase an egg outright and put it into the Hatchery

Nest – When a baby dragon is born it needs to be moved to a nest; as dragons have different types (Fire, Water, Plant and Rock being the primary four types) they must be placed into a similar nest environment; e.g. Fire dragons need a Fire nest. Only two dragons can be put into a standard nest, once placed here the dragons will start to produce Gold for the player to collect and spend

Farm – Players can build farms and create various food crops with which to feed their dragons, as they are fed the dragons will level up and become more powerful, unlocking skills and increasing their stats

The game allows players to create different types of Dragons, the base four are Fire, Water, Plant and Rock, but by combining these different types and breeding them in the incubator they can create new types such as Cloud Dragons (Fire and Water dragon) and Spicy Dragons (Fire and Plant dragon). These new dragons take the property types of both their parents and can be placed in a nest of either type.

There are multiple events available in the Combat area, new battle arena types are unlocked as players level up allowing them to fight stronger opponents and acquire more powerful items such as Gear which they can equip their dragons with to improve their Battle Power score. When entering some combat events, such as the Tournament, players choose from their list of dragons which ones they wish to battle with; in Tournaments players choose three dragons and will gain boosts if their three dragons cover six different dragon types. Combat is automated with both teams’ dragons fighting each other until the other is defeated.

Players earn Gems as they level up, as well as picking them up from winning various PVP events; these Gems are a premium currency that can also be purchased with real money. Gems are used to instantly complete various building constructions, breed dragons, hatch eggs and buy various premium only items.