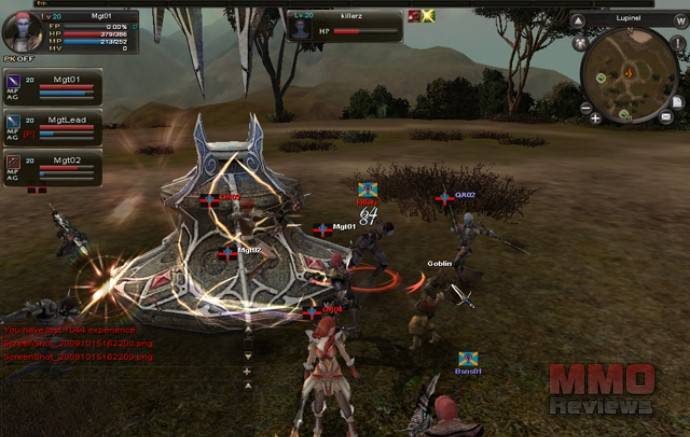 Developed by Galaxy Gate for Windows.

Karos Online is a free-to-play fantasy MMORPG where players take the role of a hero determined to defeat the curse of darkness falling over the world of Asmara and ascend to ultimate glory by becoming the mythical Karos warrior. Through questing, guild clashes and mass PvP, they enter the fight for domination over the world's vital energy source, Fletta. Fletta provides the basis for the game's unique and complex alternate progression system; alongside traditional leveling within the game, Fletta energy can be used to increase stats, give buffs, buy resources and enchant items.

After the Perna War on the Broccion Continent of the planet Asmara, the warring forces found themselves in a stalemate. They were all questing for Fletta and Fletta gems, the remaining shards of Cafenrilan power. For 500 years, the forces battled in small and large groups across the continent, all with the intent to solidify their base of power. Hass, the Emperor, persistently pursued the scattered energy of Fletta throughout the continent to break Malyx the Unstoppable, the heir to the throne of Darkness, from the seal which bound him.There was Kera behind Hass, the fiancée of Malyx and the queen of Darkness, who secretly wanted to dominate the world with an iron fist.

After approximately a hundred years of an uneventful arms race, as the forces of Light and Darkness each focused on building up their military and economic strength, both forces became anxious as they realized that the Fletta gems were running out. Fearing that there might not be enough Fletta gems left to unseal Malyx, the forces of Darkness took the unspeakable task of sacrificing living creatures, including members of their own. During the Perna War (612 - 623), having reached the limit of sacrificing what they can, the forces of Darkness gathered every soldier who was still able and sent them out to claim the remaining Fletta gem deposits and mines, mobilizing a renewed power force the likes of which haven't been seen in a hundred years (660). During this time, an increasing number of people went missing, regardless of their involvement with Fletta or Fletta gems. Each force scrambled their respective intelligence networks to find out why.

Now the forces of Darkness would get a taste their own medicine. The Federation decided to give all of the fletta mines in private ownership as incentives to those who can reclaim them from the enemy. Furthermore, any heroes who were able to destroy the soul of Malyx, the heir to the throne of Darkness, and eliminate Kera were to be designated as the Commander-in-chief over the entire Federation army. The whole continent became a perfect battleground for warriors to control and extract power from the Fletta and prove and their ability.

Humans
The dominant race on Asmara. Although physically inferior to other races, they are the dominant race on Asmara because of their superior affinity and diplomacy, and unmatched breeding speed. They have red skin and an average constitution. They are a less creative race than the Vaneeses, but boast excellent adaptability. Their cultures and languages are very diverse.

Shadow
A race hailing from the eastern Asmaran Empire. They are people with a highly unique culture who live in the outer regions of the continent. Although their relationship with the humans was a hostile one in the past, some tribes recently turned friendly toward the Asmarans as a result of the reconciliation efforts of the Empire. They tend to be generally indifferent and rather grim pessimists. They have blue skin and fine figures. They are a proud people whose blood carries a unique magical power from generation to generation.

Seroine
A beautiful half-elemental race that has interacted with Humans on Asmara for centuries, the Seroines can command the powerful forces of Nature and are a force to be reckoned with. However, they are essentially innocent and peace-loving, and prefer to avoid war and conflict with others whenever possible.

Blader
A warrior who wields either two-handed swords or spears with effortless skill.The Blader can take on several enemies at once using powerful area effect skills and can cripple them with stun attacks and knockbacks.They are the vanguards in combat and their primary role is to charge and break through enemy defense and strike important targets. Bladers who advance to the Swordsman class become dangerous two-handed killing machines while those who choose the Spearman class focus on ranged attacks using two-handed spears.

Paladin
A beautiful holy warrior armed with a sword and shield. As conduits of divine power, they use their divine aura to enhance their comrades' combat prowess, or heal them through prayers. They are a moving tank of defense and endurance. A Paladin can advance to a Defender and become an impregnable fortress by augmenting her own power, or she can choose to become a Holy Knight and support her comrades in battle via the use of divine auras.

Rogue
A warrior with flamboyant but deadly moves who wields a weapon in each hand. They learn how to evade incoming attacks and counter with a single but often fatal blow. They consider brute force as a sign of incompetence. They are fighting artists who strive for stylish combat. Upon reaching level 10, a Rogue who wants a decent repertoire of mortal strikes can advance to an Assassin while those who focus on evasion and charms have the option to advance to a Duelist.

Sorceress
Female shadow magicians whose fortes are using curses that cause slow and painful deaths.Their incantations can cripple enemies and cause unnatural aging as well as the amplification of pain.They can strategically use curses to weaken their opponents, thereby making them an easier target for heavy damage with minimal effort. Upon reaching level 10, A Sorceress can advance to a Banshee whose specialty is weakening the enemy with curses, or a Spellbinder whose specialty is damaging the enemy over time.

Bowmistress
Beautiful elemental women who have sworn to protect nature and the forests using their bows and arrows.They have range skills that attack enemies from a distance. As experts in hit-and-run tactics, they lure and disperse enemies from a distance, preventing them from doing any of their tactical maneuvers. Upon reaching level 10, Bowmistress who master the art of distraction advance to Archer while those who wish to maximize their ranged power advance to Ranger.

Mystic
Magicians who defy natural laws using their mental strength to produce awesome magical effects. Drawing power from nature, they can deal great damage to whoever stands in their way, instantaneously as well as over time. They are damage dealers who can change the course of battle with bursts of magic, often inflicting mortal damage to their enemies. Upon reaching level 10, a Mystic can advance to a Mage, who focuses on neutralizing threats from a distance, or a Cleric, who can ensure the staying power and survivability of friendly targets in combat.

Gunner
They are known throughout the world as shrewd merchants and engineers, but are also greatly feared, as their masterfully crafted weapons allow them to win a fight from great distances.

Summoned from a piece of beautiful shoulder armour, your Holy Creature will help you travel through Asmara with speed and style. You can earn one as a quest reward, buy one from the merchant in town, or perhaps loot from defeated monsters. "Holy Creatures" are Karos' mounts. they are an item that equips to your character and is displayed on your left shoulder.

A Fletta gem is compressed Fletta energy. In the world of Karos, the Fletta Gems are used in many different items. By bringing Fletta Gem Shards and other materials to certain town NPCs, players can create powerful Fletta Gem armours and weapons. Fletta points automatically accumulate in the course of fighting monsters.

All players of level 10 and above may kill and be killed by other players. At level 10, the PK button on your player interface becomes usable. When the PK button is on, you are able to target other players for combat; turning it off will ensure that you don’t accidentally enter combat when you don’t wish to (while hunting, for instance).

Player-killing in Karos Online is guided by a Moral Value system. If you kill players, your Moral Value Score (shown on your character bar) will decline.