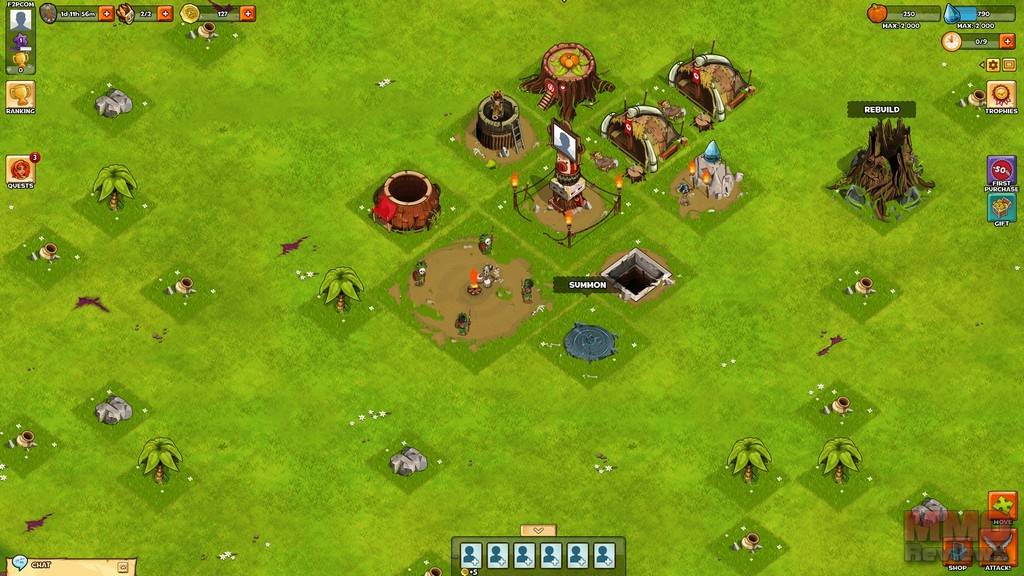 The drums of war have begun to sound, echoing through the jungle as masked savages crash through the undergrowth seeking out a new village ready for pillaging of its valuable resources. Jungle Wars allows players to be the chieftain of one such village, your job is to improve your lands and protect them from enemy hostiles or field your very own masked soldiers and bring a savage end to rival villages yourself. The game is free to play through any web browser and does not require a client download to access.

The core gameplay of Jungle Wars revolves around constructing your own base, which you must then defend whilst at the same time raising troops to attack enemy villages as a primary source of resources. Players must manage these resources, keeping them replenished as they are used in all elements of unit acquisition, building construction and upgrades, as well as managing their own time with each build using up the limited number of Workers and taking minutes and even hours to finish construction. For many players the end game content focuses primarily on PVP and acquiring a high PVP rank, which in turn will reward players with the coins Premium Currency.

Villages are made up from a variety of different buildings that players must purchase from the in game shop using their resources and construct with their Workers, each building taking up a set amount of space on their available territory. Players are able to determine the layout of their village including placing down walls and tower defences to protect their resource buildings if and when their village is attacked by other players. The main types of building are:

Totem - the main building for the village, as the Totem is upgraded to a higher rank so too can other buildings be upgraded to match it, when a village is under attack the Totem some is the primary targets that yields the majority of resources

Storage - produced or pillaged resources need to be stored somewhere, the capacity based on the buildings rank, they also make for strong secondary targets when the players village is attacked
Portals - portals allow players to summon savages to the village in order to fight in the army, the Portals rank directly determines the quality and type of unit that a player can summon such as melee Warriors or fireball casting Shaman, with more powerful units available to the higher ranked portals such as Rhinos and even Pterodactyls

Defensive Structures - whether walls used to create the village boundary or corner off specific buildings making them harder to access by melee units, or tower and turret fortifications that will attack enemy invaders; a village must prioritise their defences if they do not wish to constantly lose their resources to attackers

Players are able to focus on the PVE campaign, working their way through the quests and tackling the AI villages, which will yield resources as well as allowing players to keep their Shield that prevents players from attacking their own village, similarly by not attacking players a village is less likely to come under assault from a revenge attack. However, for those that enjoy PVP and climbing the ranks players have the chance to attack other players villages and test out their defences, trying to steal their resources and earn rank and position in the community, either as solo fighters or within a Clan, which will in turn yield great rewards for the top players.