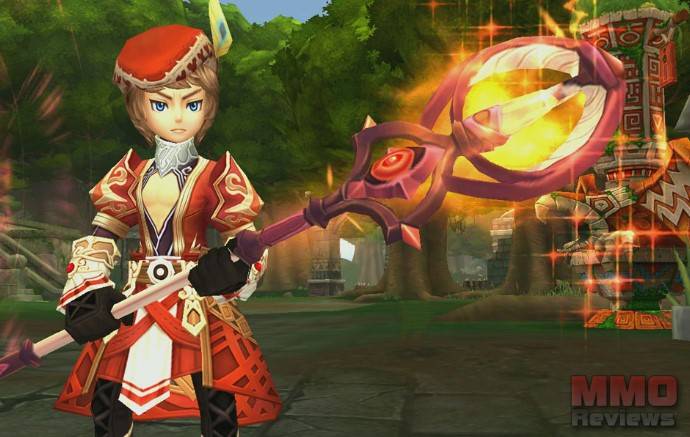 Iris Online is a free to play 3D fantasy MMORPG where three races, Human, Elf, and Human-Animal Hybrids co-exist on the world of Arcana.

It features anime graphics. diverse mountable monsters, and PvE and PvP combat. While cute and charming on the surface, Iris is a full-feature MMORPG with instanced dungeons, challenging raid bosses, and PvP zones for players to explore and conquer. With over 1,000 quests, 22 distinct themed dungeons, and a monster-summoning system.

Elves
Keeper of nature with great intelligence. They have resided in the deep woods for many centuries, and possess great beauty with powers to control nature.

Hybrids
The Species of half human and half animal. Equipped with enormous physical strength and stamina with little interest in magic, they add devastating power to their allies.

Humans
Direct descendants of the "Tree of Life". They have great adaptability to different environments, and possess great strength in magic and technology.

The magnificent world of Arcana gave birth to a king, Archane, from its tree of life. King Archane had a natural talent for magic but in his unquenchable thirst for knowledge in this craft, he was led down a path into darker and darker arts. One day the king came across a magic rune and using black magic wielded its powers to create a sword of unimaginable strength. Upon creating the Sword of Shadows, the king, once good and noble, transformed into an evil and greedy ruler, with a continual lust for power. King Archane was fully consumed by the black magic and began slicing rifts between mensions, letting evil enter the once peaceful land. As the king fell further from reason and sank into madness he began summoning monsters and creatures from the dark. Thus the old king was lost, and in his place the Monarch of Darkness remained to wreaked havoc on Arcana.

It took the power of Arcana’s 22 most talented magicians to seal the Monarch of Darkness behind a dimensional rift. However, in this struggle, they were struck by a tremendous curse, preventing them from ever doing magic again. In the final moments before all of their magic was lost, the magicians used their remaining strength to place each of their magic and secrets into a card, thus the 22 Major Arcana Tarot Cards came into being. However, in the momentary gap where the magicians turned their focus to the Tarot Cards, evil pushed forth in 22 places, and thus 22 themed dungeons were formed.

Through the Divination System, players can get their Tarot Cards read from a fortune-telling NPC. Let the Fortune Teller reveal the secrets of the mystic arts, and your character may receive buffs and other special boosts in exchange. Players can also morph instantly into monsters by using a collected Monster Card. Turn into a bouncy and resistant toadstool or a super powerful end-game boss, all with the flip of a card. Tarot cards can also be used to enhance weapons and armor, customize items, and carve special abilities.

The Tarot game consists of 22 Major Cards and 56 Minor Cards. You can utilize the cards in all aspects of the game, including Materializing, Attachment, Carving, and Summoning.

The Fool, The Chariot, and Wheel of Fortune, are included amongst the 22 Major Arcana Tarot Cards to lend its theme to each of the 22 dungeons. 22 uniquely themed instance dungeons inspired by the 22 major tarot cards. Each dungeon will have different effects on the users and the rewards are definitely worth the challenge. Certain dungeons will also require specific criteria in order to qualify for entrance.

Wheel of Fortune
Just like the name, nothing in this dungeon is guaranteed and everything is a gamble. You get a random reward for every 12 monsters killed and for every 30 levels cleared. Also, the user's stat variation will randomly change in each level upon entrance)

The Tower
In this dungeon, the higher the level you get the greater the chances of receiving rare drop items. Each level in this dungeon will enhance the user and enemy's powers differently.

The Lovers
How far will you go with your loved one? This dungeon requires a male/female pair in order to enter. If either player dies, the quest is considered fail, if the pair succeeds however; a lovely reward will be granted.

Competitive battle zones are assigned to each player based on their existing character levels. Each match will start within one minute of entering the battle zone and team captains are chosen at this point. Players can participate with up to 15 players on each team and each character's strength and skills are displayed to the opposite team. Victory is based on first team to accomplish target points and there are no split decisions.

To help maintain the experience of the team PvP, a penalty is assigned to characters who abruptly quit a battle. By winning, players can earn battle points, game money, Exp and Sxp. Battle points can be then used as in game money through select NPCs.