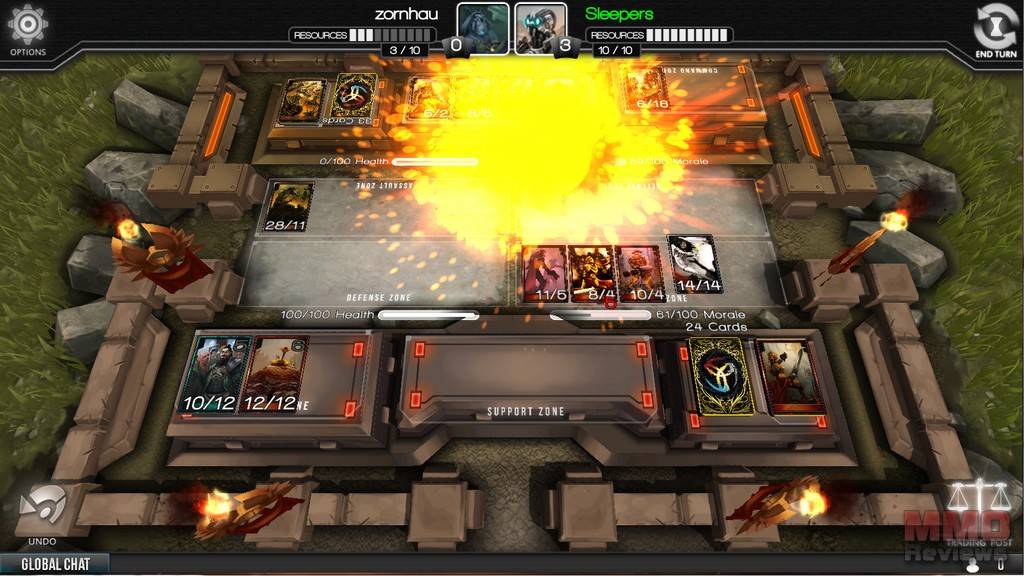 This new to the genre TCG offers up new level of strategy to trading card games, combining the best elements of the physical game and combining them with new innovations available only in a digital game creating new combat mechanics and exciting game modes. Infinity Wars is a cross compatible and all that is completely free to play.

Infinity Wars offers a refreshing change to the extremely popular genre, starting with their fully animated cards. On place of the more traditional static digital image representing a creature, power or other card type instead, is a fully animated card showing that particular creature or ability in action. As with any classic TCG players must build up their deck from hundreds of different cards from seven primary factions, though players are not restricted to building their deck using only one faction type and more factions and cards will continuously be added.

One of the key features of the game is Simultaneous Turns where players will carry out their actions at the same time leaving very little time between turns creating a much more fast and frantic battle were players must have quick reactions. The benefit is that this allows players to try and counter each other during the same turn instead of simply responding to actions that were already resolved, allowing players to dodge enemies’ spells, reposition enemies for reviews valued abilities to counter actions.

In the game players can choose from 7 unique factions, each of which has various Types that determine the best tactics and strategy to use to get the most out of their card synergy.

each card has a variety of stats and figures associated with it depending on the card type whether a Character used for attacking enemies and defending your own troops, Ability cards that allow you to perform specific actions once during the planning phase, Location cards that provide continuous effects and Artefacts that function in a similar way but can be stacked with multiple variations of themselves.

Character cards have hit points that once depleted will remove them from play, however the more unique element to them is their Morale value, representing how valued they are on the battlefield by the other troops once they are destroyed and removed from play this value is deducted from the players Morale score; it is possible to beat an opponent by never actually dealing any damage to them directly but instead annihilating their armies and reducing their Morale.

There are numerous individual game tweaks that players can change when setting up their own game, from changing the game speed by adding more morale and hit points to the players to extend the life of the game or by bumping up the number of resources and cards that they draw each turn to make the game faster.

Play there are also able to choose between a standard game which plays like any typical TCG using their customised deck or the innovative Merged game mode where players combine both of their decks into one single communal deck where they must both draw cards from.

There are also a variation on different formats which determine which types of cards players can use, from Tournaments where players can only use cards from officially released sets, Pauper that restricts players to only using Common and Uncommon Types and Singles, which means players cannot have more than one of each type of card in their deck.