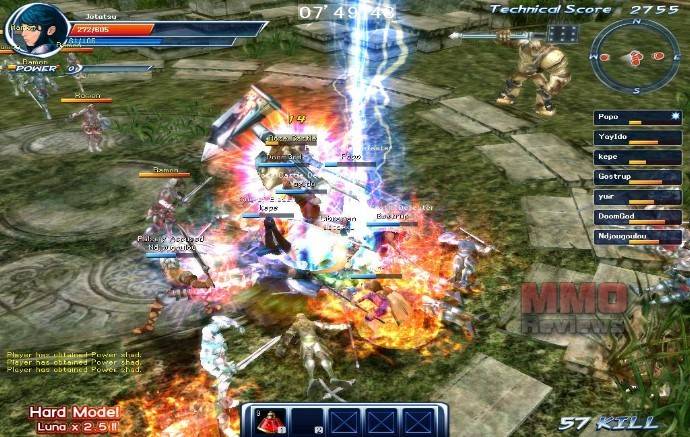 Developed by Windysoft for Windows.

Infinity Onlines a free action MMOG.  Gameplay is marked by separate game rooms for players to enter, and players have the option of using a mouse and keyboard or a controller to control their character. There are both player vs player and mission modes where players cooperate to defeat AI enemies. The in-game currency is the luna.

Infinity is focused on hack-and-slash action, an exciting fantasy setting and a good choice of customizable warriors.

In PvP mode, players can host a game with guards or without guards. In a game with guards, each player receives four guards (different guards can be purchased with luna) and can use a number of items spread throughout the map to aid them or harm other players. A game without guards does not include items. Additionally, hosts can choose to make the matches free-for-all (solo), team (players designate teams), or random (teams chosen randomly).

In mission mode, players cooperate with each other to complete a certain goal that varies between missions. Ranks that decide the rewards are given to the players based on performance. More difficult missions require that the player who wishes to host them purchases temporary mission licenses. Some missions have an admission fee that is determined by the difficulty selected for the mission.

At the beginning of the game, players can choose from four different characters, each of which use different weapons and attacks. Three different variations exist for each of these characters: normal, swimsuit, and uniform.