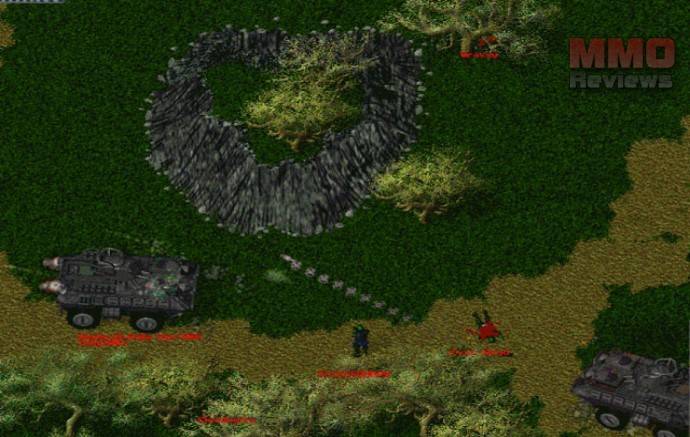 Developed by Harmless Games for Windows.

Infantry Online is an isometric perspective multiplayer combat game with sprite animation graphics, using complex soldier, ground vehicle and space-ship models on typically complex terrains. Players may choose from a list of game zones to enter, each zone having a unique style of gameplay and many offering a wide diversity of weapons, player classes and objectives.

The time is set several centuries ahead of the present. There is a war between the government (The Collective) and the various rebelling colonies of the outer solar system moons, notably the Titan colony. The Collective is a pure democracy; every single citizen has a voting unit in which they vote on every issue, although more often only on the issues that concern them. The rebels are mainly located in the outer colonies of the solar system and are a minority compared to the much larger populations of Earth and Mars. The rebels feel their colonies are being exploited for resources and labor due to the fact that they have little voice on what is decided. The citizens of the larger populations cannot understand why people would rebel from a system where everyone has a say and thus the war. Titan has the largest population of the outer rim colonies and therefore the major battles are between them and the Collective army. However, many colonies provide militia and able bodies to the cause of groups such as the European mercenaries. Due to the chaos, many privateers have emerged, such as the Morgan Raiders who will throw in with anyone providing they are paid, even though they have no love for any faction.