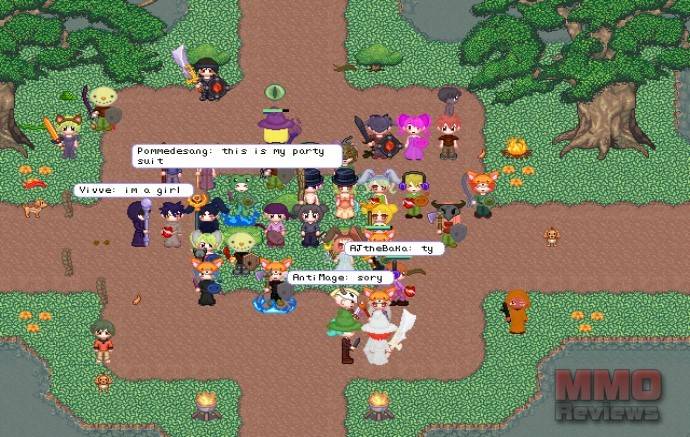 Developed by Crazed Monkeys for Windows.

Illutia began under the original name "Aspereta" In April of 2003. It was released mostly just as a test run to see if there was still a market for 2d mmorpgs. Aspereta became more popular than the small team ever imagined with over 50,000 accounts in less than a year. This encouraged Crazed Monkeys to push hard to meet the expectations of their fans.

The free server, Extrico, was first up, but there is too full Illutia pay server. The subscription fees for the pay server are estimated to be about 5$ a month for one character and 10$ a month for 5 characters. However, the free server stays up and run off of donations.

Thousands of years ago a species that would later call themselves "Lutians" rose from the center point of Yue, known as "Vita Genero." These strange creatues had an ability forsaken to all other creatures; conscious thought. The Lutians view the Yue as a source of power and use it for many purposes including magic.

Many Lutians believe that they were chosen by the Yue, others believe that they, like other living things were the result of random creations by it . This led to many wars and still divides many lutians today.

Over the last hundred years some very strange things have emerged very close to Vita Genero, where the first Lutians emerged. These creatures came to be known as the Nosaeron. They have caused many kingdoms to fall around vita genero, and seem to have no purpose other than to destroy all life.

There are 5 classes: Swordsman, Knave, Priest, Bard, and Mystic.

Any PC capable of running windows95