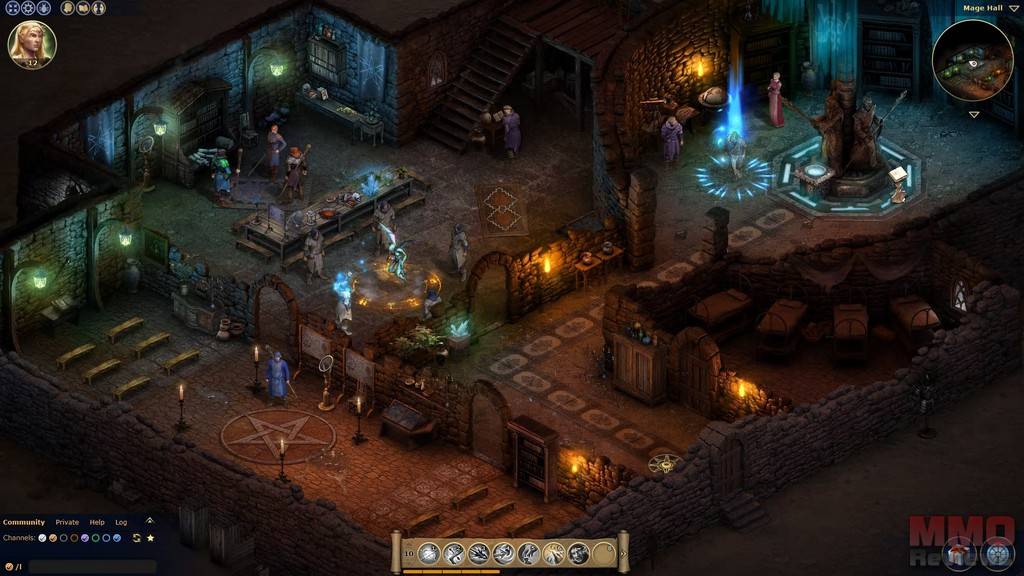 Herokon Online is a free-to-play browser-based massively multiplayer online role-playing game based on the tabletop RPG The Dark Eye. The game allows players to team up to explore the world of Aventuria, face evil forces and battle dangerous monsters along their exciting way.

Herokon Online offers 3 distinct races for players to pick from, each with a selection of 4 available professions/ classes:

Dwarves: Possessing a natural resistance to disease and poison, these sturdy and stout individuals have a particularly long lifespan of up to 4 centuries. Some of Aventuria’s most elite warriors were born from this stoic and stubborn people gifted in armour crafting. The following classes are available to dwarves:

Geode - seeing themselves as those selected by Sumu, the Earth Mother, Geodes are different to humans and that they do not practice within an Academy but instead under a master of this art form, bowl like humans their magic is still hindered by metal and so they rely on leather and staffs.

Physician - battlefield healers, the physician regards his healing abilities as its own craft and saw, needle and thread the tools of their trade. As is common for all dwarfs they are still more than capable in battle and quick to pick up an axe or a mace when needed.

Bounty Hunter - similar to a mercenary about Hunter also works a coin but focusing more on tracking wanted men and women they are adept in both urban and wilderness settings, able to hunt down their quarry and focusing on a blend of ranged and melee weapons.

Mercenary - the Dwarven love of gold expands beyond their home mines, those who become adventurers typically do so to gain coin as hired mercenaries, fighting for those who can pay the most. Specialising in cross balls and a single melee weapon they arm themselves with dense chainmail.

Elves: Originally from the light world, these people of the fey dream themselves into existence. Though there are many different types of elves, depending on where their ancestors originally settled, typically they are all tall and slender and sport traditional pointed ears. Due to their long lifetimes elves typically choose to have fewer children in comparison to humans and instead focus on completing their destined goals; once fulfilled they will take their leave of this world. The following classes are available for elves:

Ranger - the hunters and scouts of the Elven people they were born to the wild and most comfortable there, knowing the dangers they are master survivalists. Ranger is an exceptionally gifted marksman and deadly in long-range combat.

Keeper - master healers that are drawn to what the elves call the “nurdra”, the life force, and dedicate their lives to this preservation and expanding their knowledge of healing herbs and potions. Armed with

daggers or fencing weapons they only draw them in self-defence.

Spellweaver - the most proficient of magic users among the Elven folk are the Spellweavers, typically charged with travelling to foreign tribes to share and gather magical knowledge that comes natural to their race.

Fighter - Elven warriors that are sworn to protect their people and their homes from their common enemies, using their skills, bladed weapons and the traditional Elven bow. Elven magic is diminished when metal is close and so there magic wielding fighters do battle in light armour.

Middenrealmians: The humans of Aventuria occupy a wide majority of the land, over half of these descend from Gyldenlandian settlers from over 2500 years ago and are known as Middenrealmian. This people have interbred with many of their kind and so share in no real similarities other than being human and have a vast selection of cultures and backgrounds depending on their region. Middenrealmians have the following clases to their disposal:

Mage - capable battle Masters able to harness the astral powers, assigned to the mageAcademy for many years until they are able to understand and master their magic. As metal disrupts the flow of astral power to the mage they have forsaken traditional weapons and armour.

Healer - Masters of the healing arts, they are familiar with anatomy and the knowledge of curative poultices and methods. Whilst focusing on easing pain and suffering, they are more than capable of dealing it out in battle and defending themselves when necessary.

Rogue - Masters of survival both on the street and in battle they can slip a coin from a purse as easy as they can slit the throat of an enemy, dextrous and deadly they arm themselves with daggers and rapiers and keep their armour light so anot to hinder their movement.

Warrior - able to wield all manner of different weapons and shields, they can also fight wearing any type of armour, though as there role typically takes them to the front line of battle many prefer to utilise heavy armour.

The game encourages users to team up with others in groups to play jointly and be able to tackle greater challenges, taking on even more treacherous enemies and gaining better rewards.

While being free-to-play in its entirety, Herokon Online also offers the premium currency "Platinum" that can be bought with real-world money to purchase helpful pieces of gear and other items. However, all those things are also available at a higher cost with normal in game currency.