Heroes of the Storm score:

Heroes of the Storm screenshots: 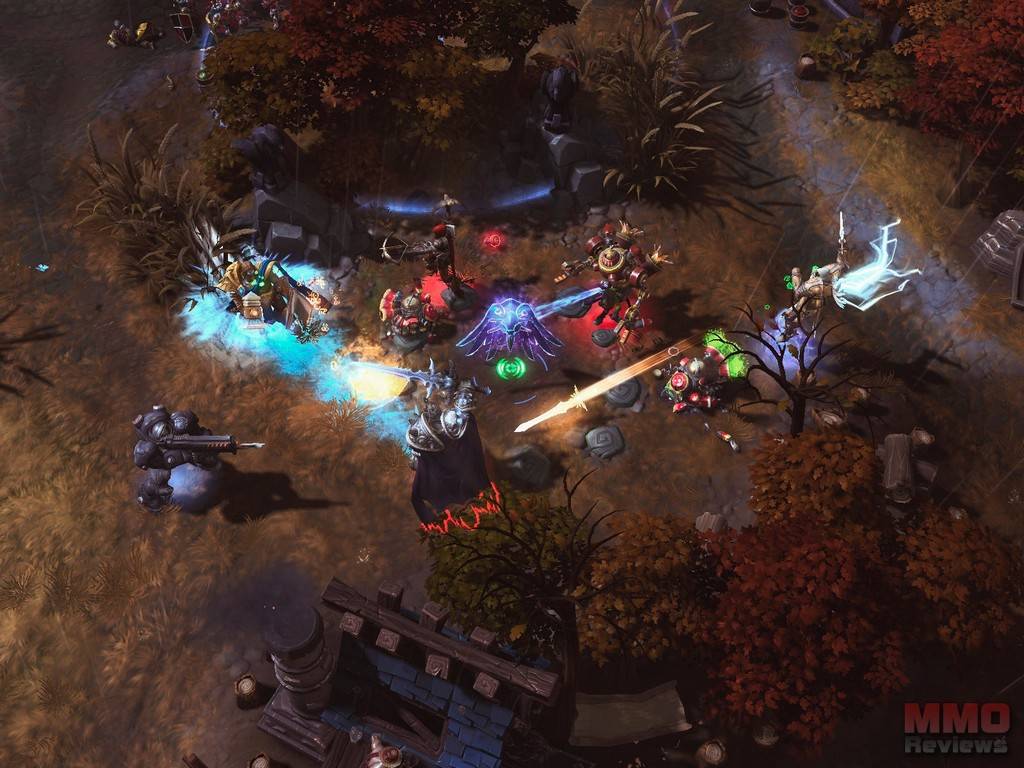 Heroes of the Storm

Heroes of the Storm review:

In Heroes of the Storm, players are able to fight as some of the most infamous and dangerous characters from the Blizzard universe, spanning multiple games and IPs, they come together in the Nexus, the planet where heroes do battle to prove who is the best in the multiverse. This team-based MOBA style MMO is fast-paced PVP with high elements of character customisation, multiple maps and your favourite characters.

The game itself has a more casual feel where players are able to drop in and out of games, play a 15 - 20 minute session and then move on, a simple to pick up game that will still appeal to the pros trying to master it. In battle players must really utilise team based strategy, no single player is strong enough to go in alone and with the various roles available it is important that players learn how to work together. To encourage this team based unity the game avoids such conflicting actions such as "last hit" kills, often a sore point in a battle which can quickly divide a group, instead when the enemy hero is killed the bonus is divided amongst the whole team.

There are a number of different heroes available fromvarious Blizzard games, including StarCraft, WarCraft, Diablo and many more. In the game we will see these heroes come together, fighting alongside each other for against characters they have never even met such as the renowned Druid Malfurion going up against Diablo himself, or the Lich King Arthas duking it out against StarCraft’s Raynor. There are five different roles available to each character:

The Assassin: these heroes are exceptional at fighting one-on-one with high bursts of damage at the expense of being weak defensively

The Warrior: hard-hitting and can handle themselves in a crowd, able to soak up damage with their higher than average defensive capabilities

The Support: support heroes can help in many different ways, from manipulating the field of battle, buffing allies and even providing healing support

The Commander: hanging back from the main action and giving orders to control the battle at a safe distance, these heroes are considered specialists

The Sieger: with a variety of defences and buildings that teams must get past, noone does this better than a siege hero focusing on destroying structures and minions

Every hero has the ability to be customised to the player's preference; aside from the typical gear that they can select as they level up during the process of the game, they are also able to select their individual skills as well is honing a particular style of play, e.g. a support class focusing more on healing than buffing if the team requires it. Furthermore, players can even choose their own Heroic attack (known as Ultimates in other MOBAs), the likes of Arthas able to choose between summoning the fearsome frost-wyrm Sindragoa or waves of undead minions.

Players can also choose from a variety of different hero skins to customise the look of their character, dressing well-known WarCraft characters in futuristic StarCraft armour, as well as equipping them with mounts to speed around the battlefield quicker such as Kerrigan riding a unicorn.

Whilst the game modes generally stay the same, both teams fighting to destroy the other team’s base, with the various maps available that take you into different environments each has a particular mechanic that can help change your strategy. From the dock side Tavern where players can gather treasure coins to pay an evil pirate to bombard enemy defences with his pirate ghost ship or on another mark heading underground to gather bones from animated skeletons and use them to create a fearsome golem that will rampage across the map for you.

These unique locations come with more in-depth defences, more than your typical tower defences players must contend with entire towns with a unique structures that will hinder their progression across the map and aid their opponents in their defences. All locations are neutral watchtowers that can be captured by either team to give them a map advantage.

As it is typical with MOBAs, players will also have to face the waves of minions that constantly spawn, however, these minions will come in many different forms and classes of their own able to support or heal each other they will be a lot more difficult than what players having previously used to.

Heroes of the Storm game