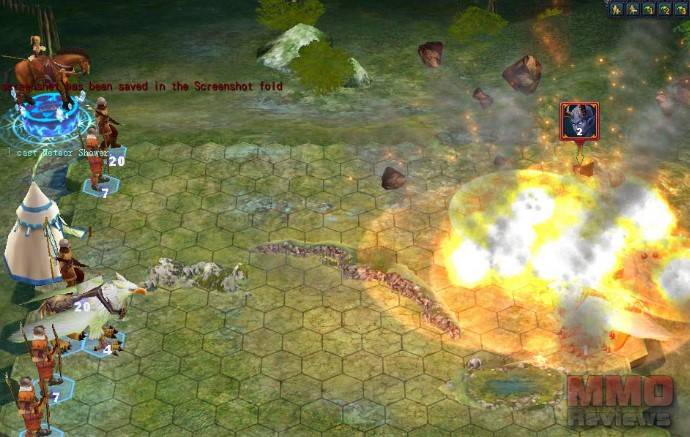 Developed by TQ Digital and Ubisoft for Windows.

Heroes of Might and Magic Online (HoMM Online) is a MMORPG which combines the classic elements of HoMM III with the updated graphics of HoMM V to present a unique gameplay. HoMM Online is also a turn based online game that puts the emphasis on strategic planning and tactical skill while allowing players to socialize and create their own stories.

Activity within HoMM Online is played out in a mouth-watering, gorgeous 2.5D fantasy world with randomly generated combat maps. The combat maps have been designed with strategic gameplay in mind, so players will be encouraged to think studiously about unit formations and tactics, although every faction has their own spheres of influence with neutral zones up for grabs.

You can not only gain Gold and resources on the Battlefield, but you can also get extra weapons and talismans by completing battles multiple times.

Experience magic based on an innovative in-game star system. Cast a new spell to increase your proficiency or perfect spells through a dynamic online training center. Once proficiency for a spell reaches the cap, then you may learn the higher star version of that spell. The more stars a spell has, the greater its power and area of effect.

You will be able to access more powerful units as you upgrade your castle with resources gained from your adventures. You may also build outside the borders of Harmondale if you have the proper paperwork and gained enough reputation with the necessary faction. Be careful though, while these castles will provide a steady source of income, they are open to attack and even buyouts from your rivals.

Attribute
Generally speaking, the attributes of your unit tells you what theycan do on the battlefield.

You need a strong army as well as a town to support your army. You will have a town when your character is created, which type depends on the race you chose. You can produce and recruit creatures and strengthen their abilities by offering souls in your town. You can enter your town to recruit creatures. High level creatures require corresponding structures to recruit.

Knight
Knights are brave and noble warriors, dedicated to honor and righteousness. While they can learn magic skills, they are by far more inclined to the pursuit of martial knowledge. Knights generally wear well maintained and intricately designed armor.

Cleric
Clerics are members of the holy orders, that better serve their cause on the fields of battle. They pursue a wide range of knowledge, both martial and mystical. Their faith brings them a power that few can match.

Alchemist
Alchemists are skilled in physical and chemical magic, and particularly so in the building and animation of golems. Working their craft builds muscular strength, which makes alchemists capable practitioners of military skills, as well.

Wizard
Wizards are dedicated pursuers of mystical and magical knowledge. While they may lend little to the direct military aspect of a battle, they are likely to turn the tide in their favor with their use of mighty arcane forces. Wizards seldom wear any armor, relying on their control of magic to protect them.

Death Knight
Death Knights are fallen knights, resurrected as liches. While they maintain their former martial leanings, their new form opens up a door to the world of magic. Death knights wear the tattered and rusting armor they were buried in, magically altered.

Necromancer
Necromancers are magic users that were seduced by the easy power of death magic. The price of their art is that its practice slowly drains the life from its wielder, eventually transforming them into liches. Necromancers often wear colorful attire in a fleeting attempt to maintain the appearance of humanity.

Barbarian
Barbarians are concerned little with anything outside the pursuit of military might and the glory of battle. Consequently, they advance more quickly in attack based skills, and slowly in all others. Barbarians wield massive weapons and have little or no armor to hamper their movement.

Battle Mage
Battle Mages are barbarians who have limited spellcasting abilities. While they advance their abilities at magic, they also study the more physical sides of war. Battle mages often wear trophies gathered from slain foes, from which they gather additional power.

Beastmaster
Beastmasters build their realms by subjugating those that dwell nearby, using physical force and intimidation to meet these ends. As a consequence, they are little interested in the pursuit of mystical knowledge. Beastmasters often costume themselves in the likeness of vicious creatures they have tamed.

Witch
Witches are adept at the use of magic, powered by the rare ingredients gathered from swamplands. Learning this knowledge takes a focus that does not allow for much advancement of military knowledge. Witches wear robes with many pockets, where they keep the raw ingredients necessary to their craft.

Overlord
Overlords build dungeon lairs to protect the gains they acquire through conquest. Ruling through intimidation, they tend to be warriors, but also know the value of magic in a fight. They often wear armor designed to enhance the ferocity of their appearance.

Warlock
Warlocks study magic for the power it gives them to achieve their dark and selfish goals. More than any other hero, they focus on the pursuit of magical knowledge over other things. Warlocks often flaunt their power, using magic to alter their features.

Ranger
Rangers are warriors born of the woods, and highly skilled at hunting and tracking. Their dedication to the protection of the wilderness often leads them to pursue a wide range of knowledge, concentrating on martial arts and outdoor skills.

Druid
Druids are mystics who draw their power from a harmonic relationship with the land. While they pursue their mystical knowledge, their outdoor lifestyle causes them to acquire a superb balance of physical skills. Druids only wear clothing made of natural materials, to enhance their powers.

Demoniac
Demoniacs are people, often ex-Heretics, who have been completely possessed by one or more demons. Though they have a natural predisposition to the growth of their magical power, Demoniacs also manage to balance it with military skill, as well.

Heretic
Heretics aim to harness demonic forces to do their bidding. While they tend to train themselves with mainly warrior skills, they must also know enough magic to control their infernal slaves. Heretics can often be recognized by the number of protective wards and markings they wear to ward off demonic attacks.