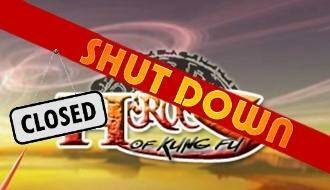 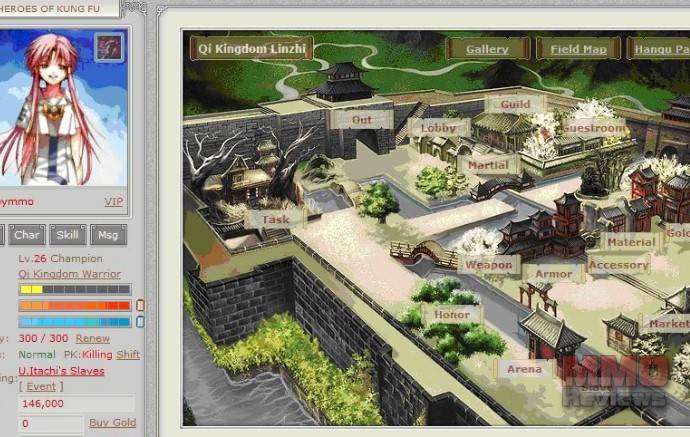 Heroes of Kung Fu is a browser based role playing game with numerous amounts of quests and equipments at the player’s disposal. The game combines the beauty of browser based games and RPGs together giving gamers a whole new experience. Heroes of Kung Fu takes place during the Warring States period, where wars are fueled with rage almost everywhere. Your role is a warrior coming from modern times to the ancient times to help your own country stand against invaders.

For centuries in ancient China, feudal wars raged across the continent. Land and power hungry emperors scoured the land looking to conquer anyone who dare stand in their way. Kingdoms rose and fell as war spread throughout the land. From 476 to 221 BC, seven kingdoms ruled the land. This would be known as the Warring States Period. This became a pivotal point in history where China would soon be united. The seven kingdoms were Qi, Yan, Chu, Han, Zhao, Wei, and Qin. These kingdoms prided themselves with their warfare and fighting techniques. Every kingdom felt like they could take over the world.

During these times, kung fu was highly used and respected by all the kingdoms. Each kingdom had its own unique style and techniques. There were many kung fu tournaments for people to test their skills against others. In an attempt to decide which kingdom had superior kung fu, the seven kingdoms held a nationwide competition. Each kingdom would send one representative to fight. The best fighter from each kingdom would carry the burden of the kingdom’s glory and honor.

Knights
Those who use spears are righteous knights. They are robust and possess great constitution and arm power. In fights, they dominate with superior physical attacks and great defensive power.

Knight-errant
The sword is the most popular weapon both in ancient times and the present. A sword user features balanced fighting power.

Hermits
Most dagger users are good at assassination. They control the fight with stealth and unpredictability. Speed and luck play critical roles in their fighting action. They often hide themselves among the public and launch a fatal attack at decisive moments.

The monster fighting and practicing mode is very unique in Heroes of Kung Fu, which discards the boring monster fights and leveling mode in traditional web games. As a gamer in Heroes of Kung Fu, you can input the on-going times for continuous practice according to your current energy points. Then the system will beat monsters and practice your character for you automatically, and exp. and equipments will be gained easily. In addition, through the feature of daily task assignments, you will be free from frequent manipulations and can accomplish the tasks automatically; the on-going practicing mode can still work when you log out of the game, so you don’t need to keep online to level up your character and earn money.

The unique slave system was originally created in Heroes of Kung Fu by merging the features of the Warring States. You just need to defeat your opponent in the arena, and the opponent will become one defeated by you. You can capture him/her as your slave and send him/her to work in the city to give benefits to you. Besides, he/she also has to give you 10% exp. each time he/she gets exp.! If you do not want to be enslaved, then fight and rebel against your master.

The game Heroes of Kung Fu topples over the machine-made style of strategic webgames, and adopted a meaningful role playing mode. With rich content and uncanny scenarios in this game, you will feel a totally different culture when interacting with many famous historical figures in the Warring States. On the aspect of the game system design, Heroes of Kung Fu offers colorful interactive tournament systems by which one can stack up against others for different purposes. There are assassination and spy missions to find out about others’ equipments or exp., arena combats to show your martial arts, tournaments in the Martial Hall to distinguish yourself from others, duels to get revenge, and competitions to discuss and communicate martial arts, etc. Here is an introduction to these special, challenging and joyful interactive tournament modes:

Interactive PK
There was an old saying about a person who kills one person every ten steps and keeps doing this for ten-thousand miles but leaves no trace at all. After this has been done, he just turns back and leaves without looking for any fame and fortune. In this troubled age of Warring States with flaming wars, you must be cautious of everything around you when you are adventuring. Certainly if your martial abilities are high, you can curb the strong and aid the weak, and rob the rich and help the poor. In the HoK world, the free PK (player killing) environment is open to you. When you are in deep resentment with another one, you can end the hostility between you and your foe through Dueling; when you want to discuss martial arts with your friend, choose Interchange; if you want to become an assassin, you can also choose to lurk in order to assassinate others.

Arena Combats
Heroes rely on their honor when adventuring in this world. There is also a saying of world rank in the world. Heroes have to fight with each other for fame and fortune. You can keep challenging others to promote your rank, and every victory will bring you some honor points. If the result is excellent, you can exchange various mighty materials for equipments with your honor points in Honor Hall. Here is definitely a place full of temptation and challenge for every hero who wants to win over the world.

Tournaments in Martial Hall
In the Warring States where everything is unpredictable, the 7 countries are congregating forces to suppress the others, or fighting with means both open and secret, and emperors of the 7 countries are also gathering numerous guards and swordsman to expand their strength. The Martial Hall in the country is just the place to test a warrior’s strength by fighting and competing with others that come from other countries. To make your fame widespread and to get yourself appreciated by more scholars and celebrities, you need to fight intensively with the superiors from other countries who have comparative strength with you. If you want to get some official posts and finally become an all-powerful general in the troubled times, you have to keep going forward under the rigorous circumstances.

The amazing instance system in Heroes of Kung Fu contains 7 large passes. Each pass is a separate instance, and each instance has its own features. Players need to know each pass’s landform, features, and the distribution of monsters. With the game’s creative in-turn battling rule, gamers need great team work to manage and pass the instances. If gamers pass one instance, they’ll gain a lot of rare and ultimate equipments.