Heroes in the Sky score:

Heroes in the Sky screenshots: 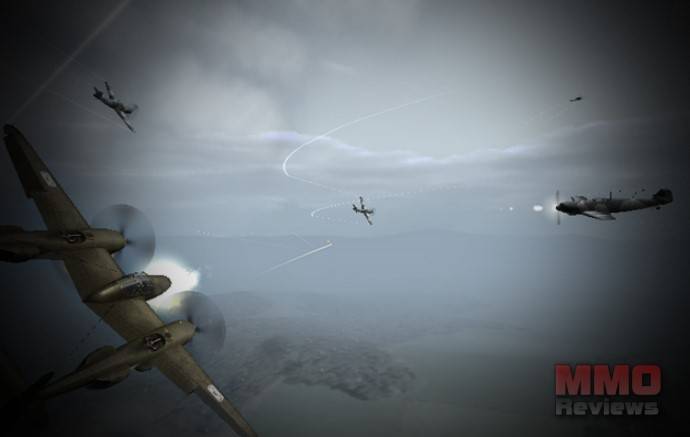 Heroes in the Sky

Heroes in the Sky review:

Developed by GameUs for Windows.

Heroes in the Sky is an intense airborne MMOTPS (Massively Multiplayer Online Third person Shooter) that combines high impact PVE and fast paced PVP as it chronicles the events from the beginning to the end of World War II. PVP combat is taken to a new level as players must not only worry about the basic danger from in front, behind, and to the sides, but also from above and below. Cannon fire, machine gun blasts, missiles, and bombs flood the skies as up to 16 players shoot it out for air superiority! If that isn't enough for you, soar across the sky recreating critical battles of the European and Pacific fronts to help your side take control in the occupational war.
Cities will be bombed, boats will be sunk, blimps will be blown to pieces, fighters will be torn asunder; all this and more will unfold as players compete to become the top Ace in WWII.

Campaign Mode
Players will be dropped into many of the major events that occurred during World War II in the Campaign Mode. Players take flight either for or against the Axis forces in both the European and Pacific Fronts. They will compete against massive waves of enemy fighters, defend fleeing allies, and bomb military (and even civillian) installations.

The missions can be tackled with friends or braved alone. However, the difficulty of soloing the higher level missions will test even the most talented individuals. Quests are also available to improve the benefits of playing through the missions and to provide players with extra challenges. Missions are a great way to hone a player's combat skills.

Attack and Defend Mode
The Attack and Defend Mode is the thinking player's version of bloodthirsty PVP combat. Players who enjoy PVP but also like the taste of the intricate field plans that are offered by the Campaign Mode will love the Attack and Defend Mode. Each team, of up to 8 players, will take command of a critical point in the history of World War II. The attacking side will have a specific mission they must complete in an allotted time and the defending team must stop them from completing the mission.

These missions require a great deal of teamwork and strike team precision from both sides. Be prepared to destroy or defend key points in the history of WWII.

Skirmish Mode (PVP)
This mode is for players who desire raw PVP! Players team up with friends or go at it in a full-blown deathmatch against as many as 16 people. Combat is enhanced further with random items spawning on the maps that provide players with the extra edge taht can separate the thin line of victory from defeat. The skies will be awash with bullets and missiles as each player tries to fell their foes.

Occupational War Mode
The Occupational War is an evolving fantasy recreation of WWII. Taking attack and defense to the height of drama, this mode will place the players into the two great battlefields of combat in World War II: The European Front and the Pacific Front. Players will join alongside their friends to help defeat the incoming forces of their enemies and to lead offensive attacks themselves in an attempt to conquer it all. This mode will help show which team has the best cohesion and is one of the most intensive options available to players.

Raid Mode
Imagine a sky blanketed with the best pilots to ever grace war and seas of expert marksmen manning anti-aircraft cannons. This is the raid mode; taking 4 teams of 4 up against the best fighters the development team has currently created and giving them the mission of defeating them all. You are also given only one chance; if they kill you it is truly game over. You'll have to watch along the the sideslines as the match gets more and more heated as damage racks up.

This mode is geared to challenge the very best and provide them with the ultimate PvE challenge. Any player who succeeds in this mode earns the right to call themselves a true Hero of the Sky.

Heroes in the Sky features over 50 planes for both the Axis and the Allies which provide players with over 100 planes to enjoy. This does not include the premium planes, bombers, or many avatars players can also choose to use to help optimize their gameplay and improve their strategies.

Fighters
The backbone of HIS are the fighter planes, which are usually seen in the front line of combat. They are units that do a little of everything very well. Their skills exemplify this truth by giving the player many ways to dodge their foes and get the upper hand that is vital for success. If you wish to be in the thick of battle, a fighter is the right choice for you.

Gunners
The Gunners, also known as AWACs (Airborne Early Warning and Control) are the support class of Heroes in the Sky. Players manning Gunners will be able to revive allies from the dead, invert damage to health, stop the enemy from shooting, and many more game changing moves. They will however be poor main strike forces and should not be brought out without fighter support. If being an all-encompassing support class, whose talents can quickly change the tide of battle, is enticing, then a gunner is the right choice for you.

Bombers
oes your foe have a base that you do not want to see existing? A bomber will provide immense ground leveling support that is key for attack and defense missions. Their large hulking frames contain countless bombs that can be used to carpet the land and sea. Bombers can easily one-hit most land vehicles if they score a direct hit and can also provide good bait for fighters who are foolish enough to charge them. The aerial mine weapon will also make short work of anything behind a bomber and can make one-on-one combat very dangerous even if no support can be found. If you enjoy massive sky fortresses that unload multi-ton payloads on the earth, the bomber is the right choice for you.

Premiums
These planes provide players with a malleability that is helpful but not game-breaking. Players are presented with many of history's greatest tested and experimental aircrafts. Premium planes will evolve with the player through a series of sequential upgrades at various levels. From the mythical Spitfire MK-V to the quirky Vought V-173 "Flying Pancake" and even the mind-boggling juggernaut Kalinin 7, players are given a wide variety of choices to help best express their playstyle.

Avatars
Heroes in the Sky provides a wonderful masking system known as "Avatars." Want your Red Baron to look like the 16-foot long Ohka? Well now is your chance! The Avatar system provides players with a cloak of sorts, changing the appearance of your plane while retaining all the functional perks of the original.

Heroes in the Sky game