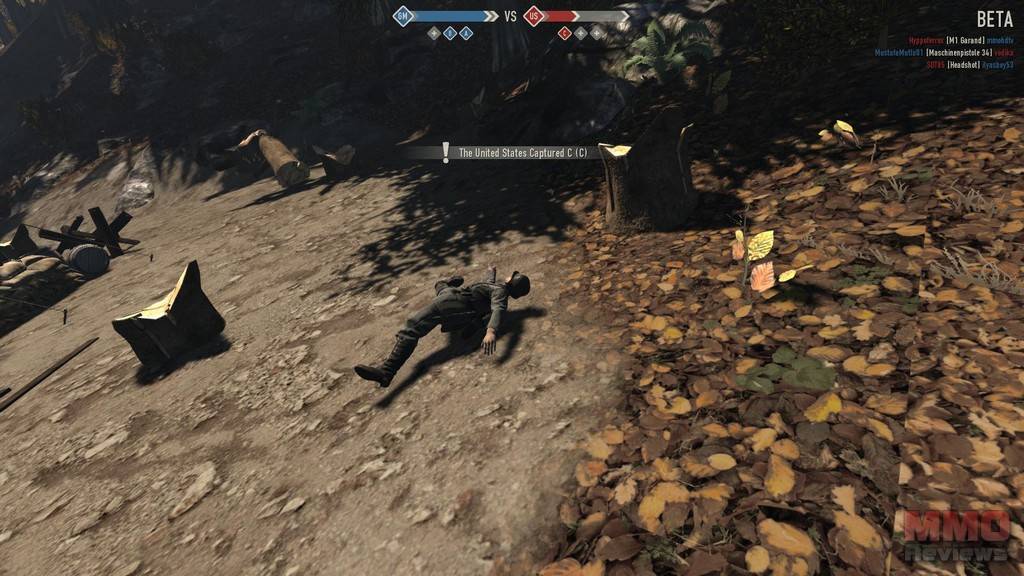 Heroes & Generals is an online war game with multiple game modes accessible from multiple platforms. Play the game as the hero on the battlefield in the action-packed FPS mode, the officer making the tactical decisions to win the battle, the general command devising the grand strategy in the RTS mode.

-  Online persistent game-world combining first-person action with strategic control.
-  One great war with thousands of participants each playing a role in the war.
-  Fight the war on foot, in vehicles or from the skies.
- Action: Multiplayer First Person Shooter with several gamemodes.
- Strategy: Action gamemodes feed into the war-server, driving the strategic game of battlefield-logistics, supplylines, production of war-material and conquering of land and resources.
- Specialize your character(s) to become a hero or rise to become a commander of armies.
-  Choose to join the US, the German or the Soviet faction and fight for your country.

Developers call this the Action Game; this is where the 'Heroes' are doing the fighting on the ground and in the clouds. The Action Game is in all its aspects a full blown First Person Shooter, complete with intense infantry, vehicle and airplane combat in a wide variety of modes and missions. As your customizable character advances in rank, you might join a small squad of elite soldiers operating behind enemy lines, or fall-in with a larger section fighting an epic battle for a strategic bridgehead.  What makes this game different to most other Shooters is that every single mission fought in the Action Game, will be a part of one grand war reaching all over Europe. In the end, the 'Heroes' will be the deciding factor on who will win the war. The 'Heroes' will look to their 'Generals', to send them the needed reinforcement and supplies that they need, to win those strategic important battles!

The Campaign is the strategic part of Heroes & Generals. In the Campaign 'Generals' will control a number of Assault Teams (army units), fighting for either the US, the German or the Soviet faction, and move them around the campaign map in order to conquer cities, airfields, factories and other important strategic points. When two or more hostile Assault Teams attack each other, a mission is created in the mission list, and players from each side can join and play out that mission. The Assault Teams carries an amount of resources, which will be the ones available in the Action game, and all kills in the Action-game will be reflected in the Campaign. The 'Generals' can also add reinforcements to an ongoing battle, so your troops on the battlefield will get more resources.

In Heroes & General you can choose to join the US, the German or the Soviet faction. Once you have chosen a side, your game account will be locked to that faction for the remainder of the war. When the war has been concluded and one faction stands victorious, a new war will begin. You can then choose to remain on the same faction, or switch to the other one.

Heroes & Generals will use the Free2Play model. You can get a great experience playing the game, no matter how much money you spend! There is an in-game economy, where you earn in-game credits for being active in the game, by playing FPS-missions and/or handling Assault Teams.
These credits can be used for personal stuff like buying characters, additional characters slots, specializing/customizing your characters and modifying weapons.
The game also offers a Premium Subscription to accommodate wishes of having an all-inclusive package, where you earn in-game credits at an increased rate, all your characters can wear two combat badges instead of one, you earn combat ribbons and badges faster, and more!