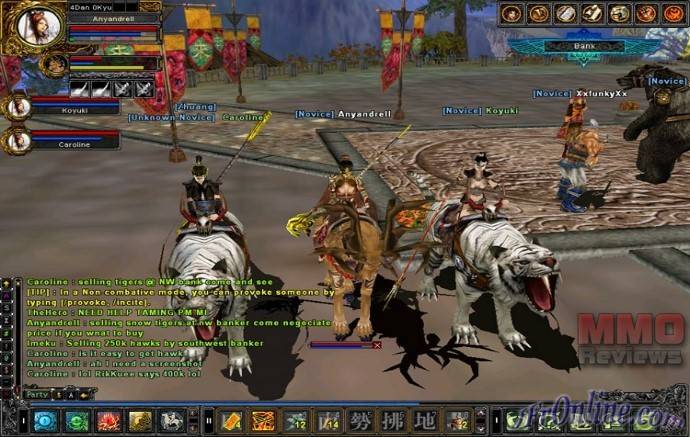 Developed by Netgame for Windows.

Hero Online is a MMORPG based on a story written by three generations of Chinese novelists.  The player, when creating a character, is not only able to choose the gender of his/her character, but what kind of weapons their character will be using. These weapon proficiencies may or may not affect the job class people will choose when they reach a certain level for job change. Each of the five characters specializes in his or her own weaponry.

Hero Online claims to have five "character classes" that you can choose when creating your character. Actually, there are three character classes, two of which having two genders, and each gender having a special weapon. The fifth character is a female that specializes in dual weapons. Though there is little customizability in the choice of characters, you have the option to choose your characters based on their weapon. More detailed customization is also available later in many forms described in the following sections, as well as the players weapon of choice.

Player characters learn many skills and forms. Every form has its distinct motion, damage, and impact. While they will not available from the beginning, skills will be attainable as players’ skill-experience increase.

- With Movement Skills, characters will be able to fly over a building or wall.

- Attack skills; players will be surprised and pleased with the many creative attack movements and big effects found in Hero Online. Here, special attacks aren’t just a form of damage, it is an artistic expression that personifies (and visualizes) their animal form!

Hero Online utilizes a reward system that keeps track of how many monsters a player kills from log in to log out. This number will result in rewards of items, exp, and rank. With this system, hunting takes on a whole new level of purpose!

IIn Hero Online, Players will have ability to either tame or purchase a pet.
Pets will grow as players feed them. And with pets, players can ride, fight, and trade

Starting at level 1 Dan, players are allowed to choose a class. The skills that you will obtain will depend on the job you choose. At 5 Dan, players can choose a second promotion.

- Hunter: Tames animals to be pets and crafts items, which can be traded to other players. Second Promotion: Tracker and Ranger.