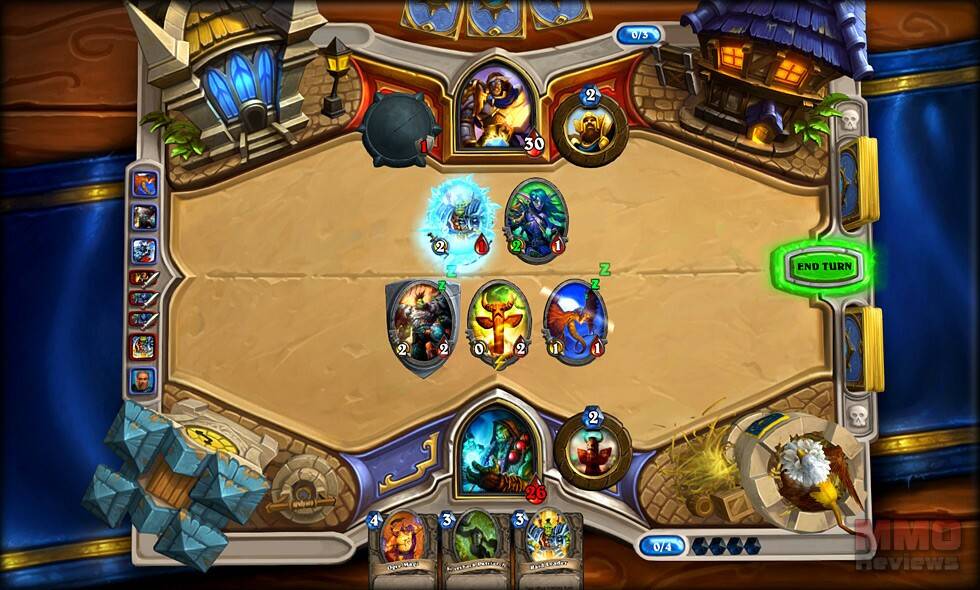 Set in the Warcraft universe, Hearthstone is a free-to-play digital strategy card game that will enter beta testing in summer 2013. Players will be able to choose to play as one of nine epic Warcraft heroes, and then take turns playing cards from their customizable decks to cast potent spells, use heroic weapons or abilities, or summon powerful characters to crush their opponent.

- Over 300 cards with more to come in the future

- 3 different play modes to practise, engage with others and build decks

Players will be able to build a deck based on one of nine epic Warcraft heroes, each representing one of the original World of Warcraft classes:

Druid- Druids are versatile hybrids shape-shifting into different forms to fulfil their roll. They can be good tanks or stealthy rogues, cast damage and do healing and even resurrection.

Hunter - Hunters deliver ranged weapon damage using bows, guns, and crossbows. They tame many varieties of beasts to serve as combat pets causing damage and giving raid buffs. Very adept at kiting, they have plenty of tools to allow them to avoid melee combat, which is a weakness.

Mage - Mages are ranged magic damage dealers with very powerful direct and area effect damage spells. They also have a variety of utility spells at their disposal, including crowd control and the ability to conjure food and water. Although possessing relatively low armour and health values, mages are quite effective at PvP.

Paladin - Paladins wear heavy plate armour and use mana. They have strong group buffs (blessings and auras) at their disposal, and can heal, tank or cause melee damage.

Priest - Masters of healing and preservation, priests are a versatile healing class while having the ability to specialize in damage. They can be powerful in healing a single character or many allies at once and also have a variety of utility spells at their disposal.

Rogue - Masters of stealth and assassination, rogues deal massive melee damage using a flurry of dual wield poisoned weapons. With their ability to incapacitate foes, deal high burst damage, and to interrupt/lockout spells, they are formidable and highly feared characters.

Shaman - Shamans are spiritual leaders and masters of the elements, using spells and totems to heal and enhance party members. This versatile mail wearing class can fill the roles of caster, healer, and melee damage dealer. High burst damage makes them effective in PvP.

Warlock - Warlocks enslave demons and call upon dark magic and curses to dominate and destroy their foes. They are primarily ranged magic damage dealers and employ summoned demons as combat pets.

Warrior - Warriors are plate-clad close-combat fighters able to fill the role of tank or melee DPS. Warrior abilities use rage which is generated by dealing and taking damage, but decays over time while not in combat.

Hearthstone is already featuring more than 300 cards and will receive additional ones later on. Once having decided which hero to play as, there are three types of cards players can build their deck with: spells, weapons, and minions. Each card falls into either the "basic" or "expert" card set.

While basic cards are the cards that form the foundation of each hero’s class, and are earned each time you play a game, expert cards can only be found in card packs or created using the crafting system; certain achievements grant them as well. They’re distinguished by their rarity: common (white), rare (blue), epic (purple), or legendary (orange). Generally, the rarer a card, the more complex it is, often providing you with new strategic options. You can have any number of expert cards in your collection, though only two of any common, rare, or epic card, and one of any legendary card, can be placed in a deck. Both basic and expert cards have important roles to play in all decks.

Practise - In practise mode, players will hone their abilities and test out new deck ideas against A.I. opponents of basic or expert skill levels, and unlock new playable heroes in the process.

Play - In this mode, players will duel each other to increase their medal ranking that indicates their skill level and the level of opponents they’ll face, earning new card packs along the way. Matchmaking will pair them up against a worthy opponent. In addition to taking part in those match-made duels, players can also choose to battle against their friends.

The Forge - In this mode, deck-building is half the fun. Players will assemble a new deck by choosing from a selection of cards provided for the match, and then duel other Forge participants for a chance to win card packs. The cards they select to build their deck with are theirs to keep and can be added to other decks in their collection after their Forge duels are complete.

The in-game Collection Manager will help players create, save, and edit multiple decks for whatever situation or play style they can think of. It allows browsing their ever-expanding card collection, disenchanting cards for raw materials to craft new ones, and building a variety of custom decks to suit their shifting strategies.

There will also be a feature included that will enable new players to build a deck without having to understand all the nuances of deck building. It will examine your deck and card collection and provide suggestions for what you should add, including a brief reasoning behind these recommendations so that you can learn a little more about how to build a great deck.

Crafting works in the following way: Disenchanting expert cards of your collection will grant arcane dust which, after having collected enough of it, can be used to craft other cards of your choosing. The amount of dust received and/or the cost of the card created depends on the card’s rarity. Basic cards cannot be disenchanted.

Hearthstone is free to play, and there are a number of different ways to acquire cards through gameplay. All the cards featured in the game can be earned, with some cards granted for duelling the A.I. or completing achievements and others found inside card packs that can be earned by playing in play mode and the Forge. In addition, there will be the option to purchase additional card packs through the in-game store using Battle.net Balance or other supported payment methods, such as major credit cards. However, there is no requirement to purchase card packs in order to play Hearthstone.