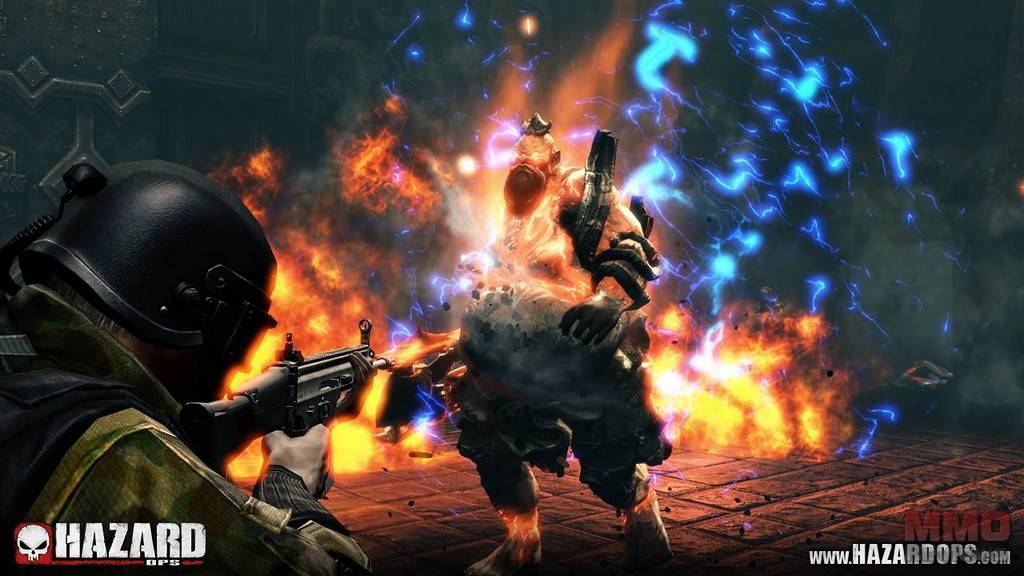 This game is hailed as being the spiritual successor of the ever-popular iOS horde hunting game Mercenary Ops, a popular game from Asia. In Hazard Ops it’s you and your team versus everything else as you must face mutant, zombie, monster and robot hordes by the score as you navigate through various environments to fight creatures from another dimension. Play through an intense PVE storyline or take on other players in gruelling 16 player PVP.

Set in a not too distant future scientists have developed a technology to open portals to unknown dimensions, when a number of different portals are opened they quickly realise this wasn’t the best idea as monsters, mutants and robotic threats from others dimension begin to invade our own world. To quickly combat these enemies a squad of mercenaries are put together to deal with such problems; you are one such mercenary and it’s your job the save the world!

The game itself at its core is a cooperative team based MMO where each player is a key member of the squad sent in to tackle this invasion from another dimension, made up you and seven of your closes companions. As a team you will progress through various levels which allows you to reveal new zones and ultimately more enemies, as new zones are opened this inevitably gives the hordes of mobs more places to invade from and so will progressing through a level naturally becomes more difficult as you go on. Combat takes on an arcade action style where the group are forced to actively dodge attacks, leap for cover and time their reloads to ensure they don’t get caught without a bullet in the chamber to drop a rampaging enemy; the best teams are those can work tactically and work together.

The game also has a difficulty setting to give the game that extra challenge, as well as the standard mode where players must face wave after wave of monsters there is also an advanced setting that not only makes the general AI more difficult but also forces players to content with huge level bosses that create their own challenge with cinematic designed actions and attacks that will test the cooperative team play of any group.

As players level up they are able to customise their own gear, using a variety of weapons, armour and items that they loot and buy, they are also able to further enhance their weaponry with additional attachments and create their own player made roles so that they serve a specific purpose in the team.

With more than sixty available levels to play through, on different settings, and each with randomly generated zones to ensure players can replay the same maps over and over it ensures that the game continues to offer a fresh experience to players. As the mercenaries head to the different dimensions they will encounter various unique environments, as well as one or two that seem very familiar, from a grim and foreboding prison to ancient temples thought lost to the vast jungles. Each will have their own unique threats that the team must combat, from cybernetic robots to monsters of mythology and legend.

To further add to the strategy of combat players will find that many components of their environment can be destroyed, from bridges, walls and more or even repaired so that a team surrounded by enemies can better entrenched themselves and build up their defences to try and bottleneck enemies through a single root. Players must navigate through various traps and hazards whilst exploring the maps, however with a little ingenuity the same traps can be turned against their enemies and used as powerful weapons such as corridors that set on fire and huge swinging spiked logs that will wipe out a horde when triggered.